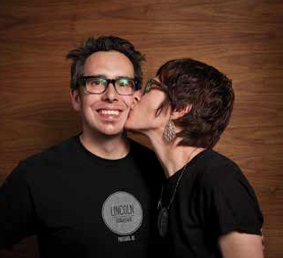 That downtown Portland is a center of fine dining is old news to anyone who enjoys a good meal. We’re justly famous for the many great restaurants that make their home in the Rose City, yet many people who come to Portland for other reasons are surprised by both the quality and quantity of first-rate eating establishments here, from the juicy grass-fed beef burgers on most pub menus to the hautest in haute cuisine.

But fine dining opportunities abound outside the downtown corridor too, like Lincoln Restaurant, which sits in the heart of the newly revitalized Boise-Elliott neighborhood in NE Portland. Lincoln’s co-owners, husband and wife team David Welch and Jenn Louis, are devoted to the highest levels of service, quality ingredients and creating memorable experi- ences for their patrons. They also love dinner. Welch explains, “Dinner is one of those cultural icons that links us together. A lot of restaurants today serve only small plates, appetizers. That’s not dinner. Dinner is an opportunity to connect and share a special occasion with our guests. It’s why we do what we do. Part of dinner is hospitality, so it’s really important that we take good care of our guests. I tell my staff every day – liter- ally – they have the opportunity to make a memorable impres- sion in someone’s life. That’s a really important thing. You need to cherish that opportunity.”

Lincoln’s website describes the restaurant as “a balance of old and new, classic and modern, rustic and refined.” Welch says, “The idea, in terms of the aesthetic at Lincoln, is that we’re younger, but we appreciate a sense of tradition.” Louis adds, “What’s broke you don’t need to fix. For example: simplicity. A lot of people don’t understand that when you’re cooking, it’s more difficult to create a great dish out of fewer ingredients than a lot of ingredients. If you use the best in- gredients and let them stand out for what they are, you’ll have something pretty spectacular.”

Louis and Welch have made Lincoln a success with this ap- proach, despite that they opened just a few months before the recession of 2008. It was a rocky period, but Louis and Welch kept their heads down and continued building their business. “We believe that if we work hard and execute on the highest level possible, we’ll be fine, and here we are, five years later, doing just fine,” says Welch. The food world seems to agree; Condé Nast Traveler magazine’s “Hot List” named Lincoln as one of 50 top new restaurants in North America, and Louis was recognized as a semifinalist for the 2010 and 2011 James Beard Foundation’s “Best Chef Northwest.”

“There are lots of different kinds of chefs,” says Louis. “We’re closer to the traditional side, but we’re not hidebound;we play with things. There are a lot of classics we do really well. We also have ingredients on our dishes that other restaurants don’t, like turkey, duck and goose eggs. We keep our craft very consistent.” The “rustic and refined” aspect of Lincoln’s food comes from what Louis describes as “very unmanipulated cuisine – that happens by careful application of craft and skill. We’re refined in our thoughtfulness about how to pair foods – under- standing how to complement the dishes.”
Welch and Louis launched their first business, a catering company called Culinary Artistry, 13 years ago, and they continue running it today, along with Lincoln. Two years ago they opened a second establishment, the Sunshine Tavern, in SE Portland. “Sunshine Tavern is named after Jenn’s parakeet,” says Welch with a grin. The name Lincoln emerged from a word association brainstorming session.

“We wanted the restaurant to be comfortable and hospitable, to feel sturdy, approachable and honest, so we put Honest Abe’s up on the board and that morphed into Lincoln,” Welch explains.
Lincoln’s menu changes daily according to seasonal availabil- ity. Louis enjoys preparing both classic and exotic dishes; on any given night you might be able to choose between a slow-braised beef tongue and rabbit. Louis also specializes in Italian gnocchi, and her cookbook on Italian dumplings will be published by Chronicle Books next year. Welch’s expertise with wines and spirits, which began when he was a boy helping his grandfather build a wet bar in their rumpus room, provides exciting and innovative beverage choices to Lincoln’s patrons. “Actually, the real impetus was the TV show ‘Cheers,’ ” Welch admits. “I just thought being in a bar was so much fun when I was a kid, and it’s turned out to be as fun as I thought.”

As Welch points out, “Being a restaurateur is completely contradictory to being an active member of a Jewish com- munity,” but he and Louis have made the Jewish mitzvah of hospitality their focus at Lincoln. “Making home a part of community was a big part of both our lives,” says Louis, and Lincoln has become an extension of that idea. Their version of tikkun olam includes holding bimonthly fundraisers at Lincoln and Sunshine Tavern. They donate 10% of the food proceeds to a variety of organizations, from local schools and theaters to Havurah Shalom, where they have been involved since the late 1990s, and other Jewish groups.

Running two restaurants and a catering company together can put a strain on any marriage, but Welch and Louis have figured out how to make it work. “We stay out of each other’s way,” says Welch. “It’s an extension of our personal relationship. To work with your partner is a wonderful lesson in communication; we help each other out and give feedback.” Louis adds, “It can be very intense some days, and we do have to set boundaries about talking about work at home, but we’re both incredibly passionate about what we do. It’s special to be able to share that passion with your partner.”