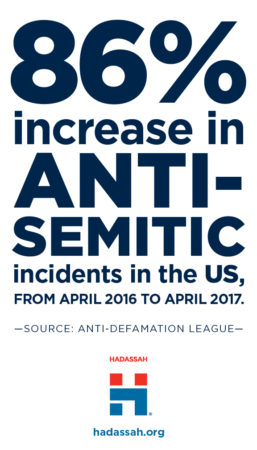 According to Hershkin, “The United States is witnessing an alarming rise in anti-Semitic incidents, varying from graffiti, hate speech and digital harassment, to bomb threats and Jewish cemetery desecrations. Additionally, white nationalist groups have increased membership and activity, receiving greater attention from the political mainstream. HWZOA deplores the increase in the number of threats and acts of violence perpetrated against Jewish institutions, synagogues and Jews around the world.  Anti-Semitism is a hate crime against all of humanity.”

Hadassah is the largest Jewish women’s organization in the United States. With 330,000 members, associates and supporters Hadassah brings Jewish women together to effect change and advocate on critical issues such as medical care and research and women’s empowerment.  Through the Hadassah Medical Organization’s two hospitals, the world-renowned trauma center and the leading research facility in Jerusalem, Hadassah supports the delivery of exemplary patient care to over a million people every year. HMO serves without regard to race, religion or nationality and earned a Nobel Peace Prize Nomination in 2005 for building “bridges to peace” through equality in medical treatment.