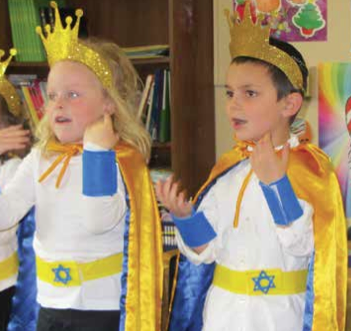 ROSH HASHANAH (Sept. 5-6, 2013) Rosh Hashanah, the Jewish New Year, is celebrated each year on the first day of Tishrei, early in the fall. The day is a special time of rejoicing as we wish each other L’Shanah Tovah, a good year. It is also a solemn day because Rosh Hashanah is not only the day on which we celebrate the creation of the world, it is also important as the Day of Remembrance, when the sound of the shofar calls each of us to recount our deeds of the past year in preparation for repentance on Yom Kippur. The Rosh Hashanah festival meal table is set specially, as for Shabbat. Throughout the High Holy Days, the challah is to be a round spiral or “turban” loaf rather than a long twisted one. The round challah symbolizes the cyclical nature of life, the seasons and the Jewish year.

YOM KIPPUR (Sept. 14, 2013) Yom Kippur, the Day of Atonement, is a solemn fast day. We pray for forgiveness from G-d and repent sincerely for our sins during the past year. Appropriate greetings for Yom Kippur inclued “May you have an easy fast” and g’mar chatimah tovah, “May you be sealed for a good year (in the Book of Life).” Families gather for a plentiful if simple meal before sundown on the eve of this holy day. At the end of the meal, festival candles are blessed and the fast begins for all adults in the household. the family then attends worship services at which Kol Nidre is chanted. While children under the age of 13 are bnot required to fast on Yom Kippur, meals for children should be Spartan to introduce the notion of fasting while still providing proper nutrition. At the conclusion of Yom Kippur, families and friends gather for a light break-the-fast meal. traditionally, this is a cold meal consisting primarily of dairy products and fish.

SUKKOT (Sept. 19-25) Beginning five days after Yom Kippur, this seven-day festival is a celebration of the abundance with which G-d has blessed us. We are encouraged to take our meals in the sukkah throughout the festival. the sukkah is a temporary dwelling covered with leafy branches and decorated with fruits and vegetables, symbols of the harvest. the sukkah is a reminder of the temporary dwellings our ancestors in ancient Israel used to live in during the harvest. It also reminds us of the booths in which G-d caused the Children of Israel to dwell during their wanderings in the desert after the exodus from slavery in Egypt. Meals throughout Sukkot include generous portions of fruit and vegetables, highlighting the importance of an abundant harvest.

TORAH (Sept. 26-27, 2013) the days immediately following the end of the festival of Sukkot are the semi-independent holidays Shemini Atzeret and Simchat torah. Some liberal congregations cele- brate both in one day as Atzeret-Simchat torah. Shemini Atzeret and Simchat Torah formally end the season of the high holidays. Simchat Torah is a final assembly day, formally ending the season of the high holy Days. It is also when we celebrate the renewal of the annual cycle of torah readings. We read the final verses of Deuteronomy, then immediately recommence the cycle by reading the opening verses of Genesis. We mark the occasion with hakafot, joyous circuits of marching around the synagogue with torah scrolls, flags and banners. Children beginning their formal religious education are consecrated on Simchat torah.

HANUKKAH (Nov. 28-Dec. 5 – light the first candle on your Hanukkiah the evening of Nov. 27) the festival of hanukkah lasts for eight days, beginning on the 25th of Kislev, which can fall anywhere from late November to late December. the holiday celebrates the victory of the Maccabees, Jewish military leaders who rebelled against the Greek-Syrian King Antiochus, who forbade the practice of Judaism and desecrated the great temple in Jerusalem. the word “hanukkah” means “dedication,” and the holy day commemorates the rededication of the temple after the Maccabees’ victory. the talmud tells us that the festival lasts eight days because, when the Maccabees rededicated the temple, they found only enough holy oil to light the eternal lamp for one day. A miracle was wrought, however, and the oil lasted eight days, long enough for new consecrated oil to be made.

TU B’SHEVAT (Jan. 16, 2014) Tu B’Shevat takes its name from its date on the hebrew calendar, the 15th of Shevat. It is called the “Birthday of trees,” and it celebrates the first beginnings of spring, although on the Gregorian calendar the 15th of Shevat usually falls in February. tree-planting is a common activity on tu B’Shevat.

PURIM (March 16, 2014) Purim celebrates the salvation of the Jews in ancient Persia from the wicked haman, through the leadership of Queen Esther and her cousin Mordecai. Purim takes place on the 14th day of Adar. (In the case of a leap year, it takes place in the 13th month, Adar II.) Costumes are often worn on Purim and gifts of food – mishloach manot – are delivered. the story of Purim is found in the Book of Esther, often referred to as “the Megillah.” this is read aloud in synagogues twice on Purim: when the holiday begins at nightfall and the following morning.

PASSOVER (April 15-22, 2014) Passover, also known as Pesach, is the eight-day observance commemorating the freedom and exodus of the Israelites from slavery in Egypt – perhaps during the reign of the Pharaoh Ramses II. the holiday begins at sunset on the 15th day of the Jewish month of Nissan. A time of family gatherings and lavish ritual meals called seders, the story of Passover is retold through the reading of the haggadah. With its special foods, songs and customs, the seder is the focal point of the Passover celebration.

YOM HASHOAH (April 28, 2014) On April 12, 1951, the Knesset passed a resolution proclaiming the 27th of Nissan “the holocaust and Ghetto Uprising Remembrance Day – a day of per- petual remembrance for the house of Israel.” the date was chosen to fall between the outbreak of the Warsaw Ghetto Uprising in 1943 and the observance of Israel Independence Day. In Israel the day is marked by various observances including two minutes of silence signaled by the wailing of sirens on the morning of the observance. At that moment, Israelis stop what they are doing, no matter what, and stand in solemn silence in memory of all who suffered and perished. In America, including Portland, most Jewish communities come together for a community-wide gathering of remembrance.

YOM HAZIKARON (May 5, 2014) Yom hazikaron is Israel’s day of remembrance for the men and women, boys and girls who have lost their lives due to war or terrorism. It is celebrated on the fourth day of the Jewish month of Iyar. As the sun sets that evening, Israel turns to the celebration of Yom ha’atzmaut.

YOM HA’ATZMAUT (May 6, 2014) Yom ha’atzmaut is the national independence day of Israel, commemorating the Jewish state’s declaration of independence in 1948. Celebrated annually on 5th of the Jewish month of Iyar, it centers around the declaration of the state of Israel by David Ben-Gurion in tel Aviv on May 14, 1948 (5 Iyar, 5708) and the end of the British Mandate of Palestine. It is always preceded by Yom hazikaron, the Israel fallen soldiers Remembrance Day on the 4th of Iyar.

LAG B’OMER (May 18, 2014) Lag B’Omer is celebrated on the 33rd day of the counting of the Omer, which is on the 18th of the Jewish month Iyar. According to the torah, we are obligated to count the days from Passover to Shavuot. this period is known as the Counting of the Omer. An omer is a unit of measure. On the second day of Passover, in the days of the temple, an omer of barley was cut down and brought to the temple as an offering
.

Every night, from the second night of Passover to the night before Shavuot, many among us recite a blessing and state the count of the omer in both weeks and days. the counting is intended to remind us of the link between Passover, which commemorates the Exodus, and Shavuot, which commemorates the giving of the torah. It reminds us that the redemption from slavery was not complete until we received the torah.

YOM YERUSHALAYIM (May 28, 2014) Yom Yerushalayim (Jerusalem Day) is the fourth of the new holidays that have been added to the Jewish calendar since the establishment of the State of Israel. (Yom hashoah, Yom hazikaron and Yom ha’atzmaut fall earlier in the month). the day commemorates the re-unification of Jerusalem in June 1967, when the Old City came under Israeli control.

SHAVUOT (June 4-5, 2014) Shavuot occurs on the sixth day of the hebrew month of Sivan – late May or early June. Shavuot com- memorates the anniversary of the day G-d gave the torah to Moses and the Israelites at Mount Sinai. It is one of the Shalosh Regalim, the three Biblical pilgrimage festivals. It marks the conclusion of the counting of the Omer.

TISHA B’AV (Aug. 5, 2014) Tisha B’Av is a fast day that commemorates the destruction of the First and Second temples. It also became a day of general mourning for other major disasters that have befallen the Jewish people, from the Edict of Expulsion from England in 1290 and the expulsion of the Jews from Spain in 1492 to the mass deportation of Jews from the Warsaw Ghetto during World War II.

'A Guide to Jewish Holidays' has no comments