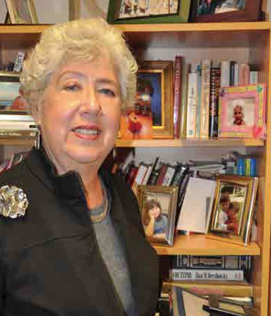 Portland’s Jewish community was enriched by decades of dedicated service when Canadian Laurie David came to town to visit her aunts in 1964 and fell in love with Portland native Bert Rogoway on a blind date.

This month, Laurie Rogoway retires after 30 years of building community through her work at the Jewish Federation of Greater Portland. Before that she served as the first employee of the American Jewish Committee in Oregon (from 1978 to 1984), and before that she was an active volunteer including marching for freedom for Jews in the Soviet Union.

Barbara Durkheimer has known Laurie since she began her career as a Jewish communal worker. “Her career began with AJC, now OAJC, when my dad was president of the organization,” says Barbara. She adds that throughout that career, “Laurie envisioned maintaining, sustaining the Jewish communities all over the world. She was true to it, she delivered on it and she helped this community especially reap the rewards through her vision and determination. … She was respected and admired, and everything she did or said was heartfelt.”

JFGP President and CEO Marc Blattner adds, “Laurie is a ‘pro’s pro!’ I am unsure what more needs to be said. I first met Laurie in 1997 on a federation mission to St. Petersburg. I was working at the Baltimore federation, and Laurie was from Portland. We would subsequently see one another through the years on other mission programs and federation conferences. She was always there with a smile, different ideas and great interest in learning new and different ways to do our work better. Since my arrival in Portland four+ years ago, she continues to be my mentor, wise sage and conscience as we work to enhance Jewish life for generations to come (including for her own children and grandchildren).”

Laurie says she will miss working with the wonderful lay and professional leaders she has spent so much time with. She says she will also miss being part of the planning process. Laurie says the trend she most regrets seeing over recent decades is that American Jews now have less of a sense of being part of the world Jewish community and feel less connected to Israel. “I think it’s a loss for people who don’t have any sense of that.”

“One of the greatest joys of my life was to be part of that,” says Laurie of the rallies and marches that ultimately freed Soviet Jews to emigrate to Israel and the United States. “We felt connected to people thousands of miles away. … We celebrated when the exodus began and had a huge sense of empowerment and of being part of something much bigger than ourselves.”

Throughout her years at federation, Laurie says she has been privileged to visit many countries whose people have been aided by the money raised by the American Jewish community. She has welcomed new olim who flew from the former Soviet Union to Israel when Jerry and Helen Stern and their family financed an entire planeload of emigrants during Operation Exodus. She has visited Ethiopians preparing to fly to Israel and then flown on a parallel flight to welcome them to their new homes.
“You don’t forget those experiences,” she says.

While some people think of such trips as “little jaunts,” Laurie says those experiences serve an important purpose: “To see firsthand what our dollars are doing, so we can come home and share the stories.” But while the trend to less engagement with the world Jewish community dismays Laurie, she sees hope in another trend – one toward more awareness and acceptance of the size and diversity of the local community.

“When I started, we thought there were under 10,000 Jews here,” says Laurie, noting that in the ’60s and early ’70s Portland had only three or four synagogues. “We looked at people who were part of the established community; nobody thought about people with no ties. The demographic study a few years ago showed more than 45,000, which we knew instinctively but had never addressed in a communal way.”

The recognition of the large unaffiliated population has caused a shift from an institution-centered community to a service model. She says the service model “provides services where, when and how people want them. That’s not to say anything goes, but to give people a meaningful Jewish life in a way that works for them. We’d love for everybody to belong to a synagogue and support the agencies, but they may not.”

Laurie says generations of her family have reaped the benefits of the local Jewish community agencies. She and Bert have had family members live out their golden years at Robison Jewish Health Center, they adopted their oldest daughter with help from Jewish Family & Child Service, they have all enjoyed activities at the Mittleman Jewish Community Center, and her children and grandchildren have thrived at B’nai B’rith Camp.

Laurie and Bert have three children and nine grandchildren. Susanne Wendrow and her husband, Michael, live in Portland with Noah, 15; Rael, 12; and twins Levi and Sethan, 9. Edie Rogoway Van Ness, an attorney in Portland married to Nathan, has a daughter Georgia, 8. Son Allen Rogoway and his wife, Alli, live in Chicago with four children – Maysun, 14; Ruby, 12; Shay, 5; and Osmund, 6 months.

As Laurie heads into retirement, and the freedom to spend more time with her family, she says, “My personal goal is that my grandchildren will find a place in this community that they want to be a part of, and that the community has interesting and meaningful programs for them.”
Laurie Rogoway Retirement Party
Happy Chanukah
WWHEN: …. WHERE: …. TICKETS: …. RSVP by Jan. 9: ….
Tuesday, Jan. 13, 6:30 pm – Cocktail Reception; 7:30 pm – Program to honor Laurie Mittleman Jewish Community Center, 6651 SW Capitol Hwy., Portland
$40 includes cocktails, kosher tidbits and pupus. Tropical attire encouraged. Rachel at 503-892-7413 or online at jewishportland.org/Laurie