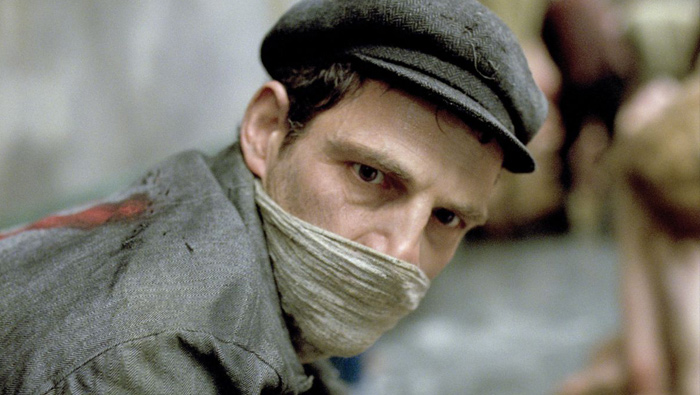 “Son of Saul,” directed by Laszlo Nemes, won a Golden Globe for 2016 Best Director of a Foreign Language film and has been nominated for an Oscar. Whether you catch it at the theater or on DVD, it is intense.

The film stars Geza Rohrig as Saul and is set in Auschwitz. Saul is a Sonderkommando, an inmate forced to drag bodies to the crematorium and cleaning up the remains.

Saul sees the body of a boy and becomes obsessed with giving his corpse a Jewish burial. No matter how many Holocaust films you have seen, you have never seen one like this. The cameras focus tightly on Saul. Eight languages require English subtitles.

I was fortunate to attend this year’s Palm Springs International Film Festival, where the film was screened. We were taken by surprise when the 38-year-old Hungarian film director came on stage immediately following the film to answer questions. Nemes was soft-spoken and passionate – and the whole experience was riveting.

Following are a few of the audience’s questions and the director’s answers (edited for brevity and clarity). The full interview is available online at:
orjewishlife.com/audience-interviews-son-of-saul-director-laszlo-nemes/

What was your reasoning behind your filming approach, using close-ups and leaving everything else in the periphery?

Actually, in cinema when you want to show too much and you have the strategy of frontal representation, I believe you actually diminish the moral scope or the significance of what you show. You make it understandable. The audience can encompass what they see. The imagination of the viewer is not working. I knew that I had to find away to make it a personal experience, and for that I had to narrow the scope. We wanted to make a portrait of one individual. One thing that makes sense, that you could represent, is the honesty in the human face. Everything else is in reference to that. There is one reference point. It is the human face and then the imagination to function, to recreate, to have the intuition of the suffering that is taking place in the background. It has to go through the viewer’s imagination.

Do you think Saul’s journey was a search for redemption? Or was this his son?

I am very reluctant to give a manual to the film. I think I really wanted to offer a personal experience. It had to be a simple story. The real question within the story is one that you, the viewer, has to answer: Is there in anyway a possibility when there is no more hope, no more religion, no more god and nothing human, is there still the possibility to remain human? And that is the question of the film. I am not saying that what the main character wants to accomplish has to make sense to everybody. But it is a question. If Saul in the film, and the other members around him, does not understand what he is trying to accomplish, but it still makes sense to him. We hope it makes sense to the viewer after a while.