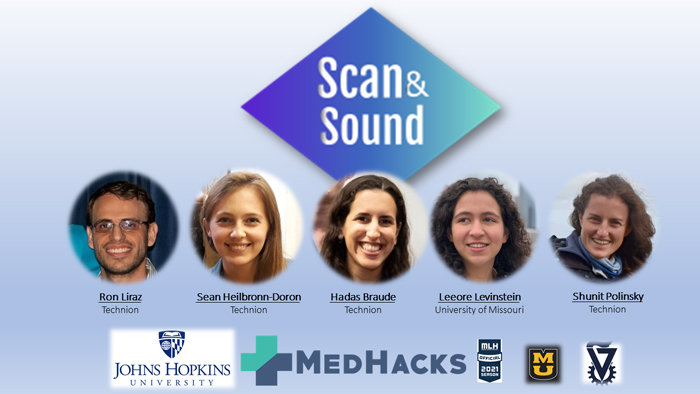 A team of students from the Technion and the University of Missouri won second place at MedHacks – a hackathon for developing medical technologies hosted by Johns Hopkins University. They were awarded for developing the Scan&Sound application, which detects strokes at early stages and alerts the victims.

MedHacks is the largest hackathon in the U.S. for developing medical technologies. This year, more than 1,000 people participated, including students, doctors, engineers, scientists and entrepreneurs from all over the world. The event was a collaboration between Johns Hopkins University and MLH – Major League Hacking, which organizes hundreds of student hackathons every year, and was funded by various entities, including Google Cloud.

One in four people in the United States experiences the clinical phenomenon known as a stroke at one point in their lives. There are many different levels of severity, ranging from a stroke that one is not even aware of experiencing an event that results in serious cognitive and motor impairments, and even death. In addition to personal harm, strokes also incur enormous financial expenses for the individual, the health system, and the country. As a result, there is a great deal of motivation to develop methods to identify strokes at the early stages when treatment is more effective.

Scan&Sound won second place in the “Personalized Medicine Using Data-Driven Healthcare” Category. The application detects early, subtle stages of stroke by studying voices and facial expressions and analyzing the data using artificial intelligence. If there is a significant change, the application alerts the user that they are suffering from symptoms that may indicate a stroke and suggests they call predetermined contacts or an emergency call center.

Hadas Braude, who headed the group, proposed the idea after someone close to her suffered a stroke. On the day it happened, the person met with friends and family, who immediately noticed that something was wrong. They did not, however, suspect a stroke.

“As a result,” says Hadas, “the man arrived at the hospital late and missed the ‘treatment window.’ Since then, I haven’t stopped thinking about how to prevent the next incident, and have asked myself how it can be possible that the telephone that is always with us gathers information about us, but cannot detect and warn that something is wrong with us.”

Hadas and Sean Heilbronn-Doron met before this round of the competition when they competed together in the T2Med hackathon hosted by the Rappaport Faculty of Medicine at the Technion. Following their win at T2Med, the two registered for MedHacks and invited Ron Liraz, a talented and experienced electrical engineer they met at T2Med, to join them. In classic Israeli fashion, the two other members of the unique and diverse trans-Atlantic Scan&Sound team arrived through personal and family contacts.

The hackathon itself was very challenging. Besides the physical distance, the members of the team had to contend with the time difference between Israel and the U.S., as well as navigating classes and other prior commitments. They were able to achieve their goal through effective communication, planning, determination, division of labor and, most importantly, through each member’s personal commitment to the project.

The judges at the competition were extremely impressed with their project and asked the team members – in jest mixed with wonder – not to forget them after they become rich and famous. But Hadas and her friends stress the project’s true goal is to enable people to receive treatment in time and to safeguard brains, identities, and lives. This is, in fact, the motivation that inspired them to establish a technological team and to create partnerships with neurological departments and rehabilitation centers in Israel and the U.S.