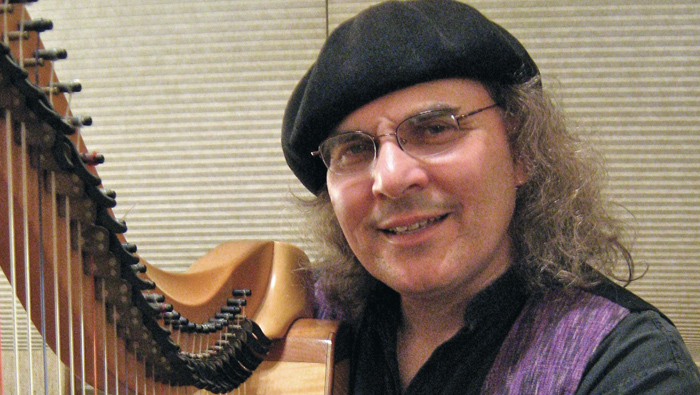 In a lucid dream that occurred a few days before the first anniversary of his mother’s passing, Eugene harpist David Helfand answered a phone to hear his mother say, in a voice gravelly from disuse, “Hey, Sweetie! It’s been quite a trip!” He then entered into a conversation with her until his own voice got louder and he woke himself up. Now fully alert, he recalled the dream with amazement and wondered which trip she was referring to: her life’s journey, or a journey beyond life?

He couldn’t remember all the details of their conversation, but he came away from it with a sense of “after our passing, better put on your seatbelt, ‘cause it’s gonna be one helluva ride through the cosmos!”

At least this was the sense David transformed into musical inspiration, and eventually, into the central instrumental piece on his new album with violist Justin Lader, which is titled “Through the Portal.”

This incident wasn’t the first time David’s mother had deeply interfaced with his music. A year earlier, his sister Judith, a documentary filmmaker in New York City, had met with David as their mother lay dying in New Rochelle, NY. He’d given Judith a copy of a CD that contained several new songs he was working on. One in particular, “Searching for You,” which was filled with a kind of meditational rapture, seemed to her the perfect spiritual background for the situation that faced them.

They couldn’t tell for sure if their mother was listening, but as the song faded out, it seemed to take the listeners into a distant yet beautifully beckoning place. It was on those final notes that their mother took her final breath and then passed peacefully. David felt awed and humbled that the last thing she may have heard was his own composition providing a calming road to her transition.

“That moment became so powerful, so personal,” he says, “and later I wanted to share with others her journey through life and beyond and my own musical awakening.”

“Searching for You” is also the final piece on David’s album, his eighth. Previous works have taken the listener to King Arthur’s castle ruins in England (“At the Edge of the Cornish Sea”), on nomadic caravans through Israel (“Beyond the Sea of Reeds”) and to Indian, Middle Eastern, Gaelic and East Asian destinations via his Celtic harp, mandocello, guitar and, more recently, his ethereal electro-mechanical Mellotron, used so hauntingly in tunes by ’70s groups such as The Moody Blues.

Most of his latest projects have been in collaboration with Lader, who also contributed the song “Orbit” to this album.

Helfand had been raised in a Conservative Jewish home on Long Island, which, though predominantly secular, nourished his spirit with culturally rich traditions. He moved to Eugene in 1987 and today is Jewishly active in Temple Beth Israel.

His inspiration comes from many sources, including Reb Shlomo Carlebach, the “godfather” of rabbinical balladeers, and Scottish multi-instrumentalist Robin Williamson, founding member of the Incredible String Band. The interludes inspired by his mother, however, brought it all back home.

Helfand’s latest CD is available along with most of his other albums online at davidhelfand.com.