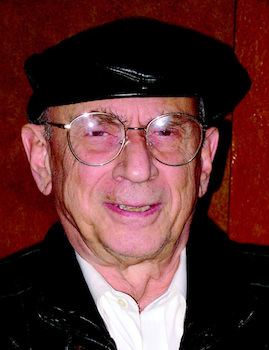 When you hear a Dave Frishberg song, you notice it. The lyrics are cool, wry, sophisticated and, at times, wistful. The music, always in service to the words, enhances their meaning in subtle, indefinable ways. Frishberg’s artful settings lend his lyrics a three- dimensional quality, so that they take on additional meaning.

Frishberg’s songs, including “My Attorney Bernie,” “I’m Hip” “Do You Miss New York?” and “You Are There,” have been interpreted by some of the greatest jazz singers of the past 50 years: Blossom Dearie, Rosemary Clooney, Michael Feinstein, Diana Krall, Mel Tormé and Portland’s own Rebecca Kilgore. Frishberg’s songs are also fa- miliar to fans of the groundbreaking 1970s ABC series, “Schoolhouse Rock!” especially Frishberg’s ode to legislation, “I’m Just a Bill.”

Frishberg has a quiet, self-effacing manner that fits his persona as the ultimate sideman. He started playing piano professionally in his hometown of St. Paul, MN, before moving to New York in the 1950s. By the early 1960s, Frishberg had started writing his own songs, beginning with the wittily narcissistic “Peel Me a Grape.” Last month, Frishberg celebrated his 80th birthday, but age has diminished neither his talent nor his desire to keep challenging himself. On April 6, Frishberg makes his orchestral debut with the Oregon Symphony. “I’ve never performed with an orchestra before,” he confesses. “I’m scared to death.”

That diffidence kept Frishberg behind the piano for many years. “I felt strongly that I wasn’t a very good singer, and I didn’t want to presume to sing other people’s songs, because that’s what ‘professional singers’ do,” he says. Singing wasn’t something Frishberg yearned to do, but when he began composing original songs, he decided the only way to interest other singers in his work was to record them himself. “I started singing in order to demonstrate my music. If I wanted people to sing my songs I had to sing them myself, because I knew how I wanted them to sound, not so much voice-wise as attitude-wise.” The strategy worked, and Frishberg continues to perform his own songs today, but he remains a piano player at heart. “I’m primarily a pianist because that’s how I made my living,” Frishberg explains. “I’m careful not to sing too often. I only do it once in awhile, so no one gets sick of it. If I start singing too much they’ll say, ‘He does an act,’ and no one will call me for the piano gigs any more.”

If Frishberg sees himself as more of a player than singer, perhaps it’s because of the outstanding vocalists he’s worked with over the years. In particular, he praises Kilgore’s subtle, flexible style. “I was attracted by the way she presented herself and the music; her interpretations really showcase the songs.” Frishberg and Kilgore have worked together steadily since he moved to Portland in 1986; they have also recorded several CDs. “Over time, she’s just gotten better and better. She’s the best singer I ever played for, no question, and one of the best I’ve ever heard.” For the past three years, Frishberg has spent much of his creative time writing a memoir. “It’s a series of observances, little episodes in my life, about things that happened to me as a musician. I’m using my lyrics as chapter headings.”

Today Frishberg is nonobservant, but he grew up in a Conservative home in a Jewish neighborhood in St. Paul. “I had a bar mitzvah and we celebrated Shabbat; my mom kept kosher.” Frishberg’s father also insisted that he and his older brothers attend cheder. “I hated it as a kid,” he admits with a grin. That childhood drudgery has paid off, however. “Today I’m thankful I learned how to read Hebrew,” he says. “So if I go to somebody’s wedding or bar mitzvah, I can follow along and I don’t feel like an out- sider.” Frishberg also found his Hebrew instruction useful some years ago, during an encounter on an airplane. “The person next to me was an Israeli woman and she asked me if I went to Hebrew school. I said, ‘Sure I can speak a little Hebrew.’ ‘I want to hear it.’ So I said, ‘I want to go to the House of Thrones,’ which means ‘I want to go to the bathroom.’”

Elizabeth Schwartz is the program annotator for the Oregon Symphony and a freelance writer living in Portland.