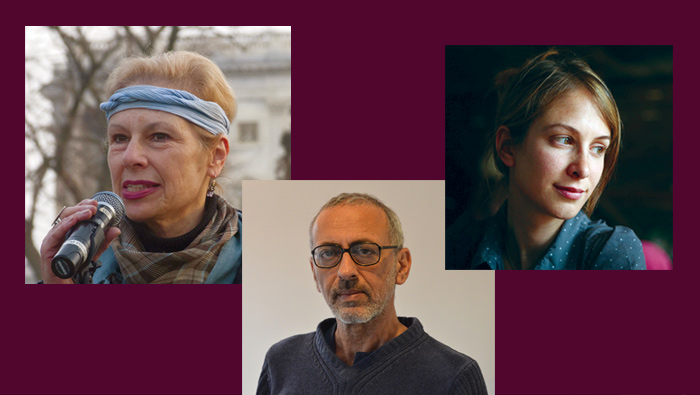 In 2010, award-winning poet and activist Frances Payne Adler became alarmed by news reports of Israeli settlers in the West Bank throwing stones not only at their Palestinian neighbors, but also at IDF soldiers, whose job it was to safeguard the Palestinians.

“I have been concerned about the settlements for many years,” says Fran. “When I heard about the settlers throwing stones and eggs at the soldiers – because they were protecting the Palestinians – I thought, ‘I don’t know enough about this – the mindset that would cause the settlers to do this.’ I wanted to educate myself, and I knew I couldn’t do it from here. I needed to go there, see for myself, talk to people.”

The following year, Fran traveled to Israel, her first visit in almost 30 years. She rented an apartment in Musrara (Morasha), a neighborhood “right on the seam between West and East Jerusalem. I bought my vegetables in the Arab section and my challah in the Jewish section,” she says.

Fran lived in Musrara for two months; there she met a variety of people, both Israeli and Palestinian, and she began gathering their stories. The result is a collaborative exhibit, “Dare I Call You Cousin,” created by Fran, Jerusalem photographer Michal Fattal and Tel Aviv videographer Yossi Yacov. The publicity materials for “Cousin” describe it as “an exhibition of photos, poems and videos, compassionate to the struggle of Israelis and Palestinians on both sides of the Green Line.” Cousin will be exhibited at Havurah Shalom from Thursday, March 3, through Sunday, March 13.

While Fran emphasizes the collaborative nature of the exhibit – “It’s not my project; it’s the product of all three of us,” she says Cousin is her brainchild. For Fran, who moved to Portland in 2007, Cousin marks the latest in a series of collaborative social action art installations she has been creating with photographers since the early 1980s; previous works focused on health care, homelessness and domestic violence. A nationally recognized poet, Fran also founded the Creative Writing & Social Action Program at California State University-Monterey Bay in 1994, where she taught for 15 years. Fattal, who works for Ha’aretz, has published pictures in the New York Times, the International Herald Tribune and The Guardian, among other news outlets. Yacov, who comes from the world of documentary film and TV news, has been filming the Israeli and Palestinian peace movements for years. Since 2006 Yacov has worked for human rights organizations including Breaking the Silence and the Association for Civil Rights in Israel.

“Cousin is the most difficult thing I’ve ever written, because of the subject matter,” Fran says. “Touching it is like – you need asbestos gloves. Like all Jews, I was told not to talk about this; I was acculturated to silence. But my whole professional life as a teacher and writer is about breaking silence.”

Fran found parallels to the issues raised by Cousin in stories from her own family. “My grandmother Bessie left Russia alone at age 13 after Russian soldiers beat her up. I remember her asking me, ‘Francela, do you know what it’s like to feel homeless in your own country?’ That stayed with me.” Fran’s mother-in-law, a Holocaust survivor, spoke often of the vital role non-Jews played in helping her and her children survive. “That stayed with me, too,” Fran says. “Finally, I asked myself, ‘What may or may not be happening in the world I live in that I should be doing something about?’ Cousin is about breaking silence, bearing witness and taking it beyond the page. I want this exhibition to create breathing space for community discussion.”

The title “Dare I Call You Cousin” has several meanings, says Fran. “First, it’s not a question. In Israel there’s a saying, ‘lama lo’ – why not? But they don’t say it as a question, they say it as a statement. There’s also the history of Abraham being the patriarch of both Israelis and Palestinians – they are first cousins. And finally, it’s thought-provoking: Dare I, a Jew, call you, a Palestinian, my cousin, and vice versa.”

Today, Fran feels more optimistic about the possibility for peace. “I met so many people, Israelis and Palestinians, who are working nonviolently, with great passion and determination, for change. I hadn’t heard about them before.”

'Dare I Call You Cousin' has no comments