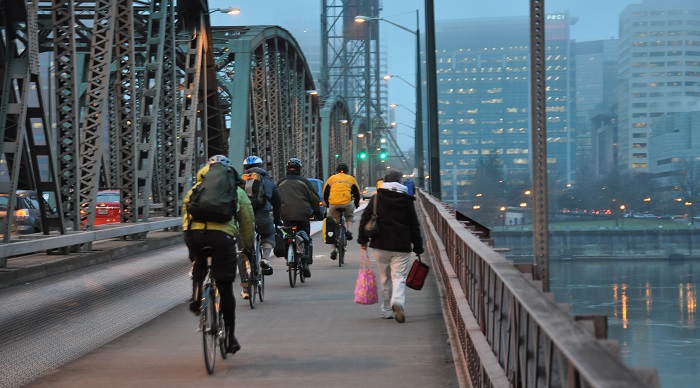 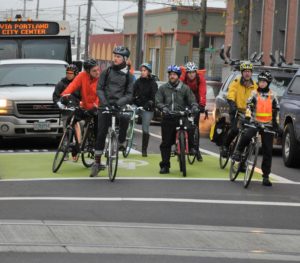 PHOTOS – Above: Cyclists pass pedestrians and stopped cars as they cross the Hawthorne Bridge on their morning commute into downtown Portland. Since 1991 bicycle use has increased 322% while car traffic has remained static on the city’s four main bicycle-friendly bridges: The Broadway, Steel, Burnside and Hawthorne. The Portland Bureau of Transportation’s 2010 Bicycle Count reports that bicycles represent about 20% of all vehicles on the Hawthorne Bridge.
At right: Cars, bikes, a Trimet Bus and tracks for the Max train all have their place on Portland streets.

Bicycle use good for planet, wallet and mental and physical health

Story and photos by Deborah Moon

A rabbi, a lawyer and an urban planner all ride their bicycles to work …
No it’s not the start of a bad joke – it’s part of a growing trend of bicycle commuters in Portland, a trend that has a large number of Jewish leaders. Motivated by tikkun olam (repair of the world), personal health, economics or a combination of those factors, many Jews have made commuting by bike a regular part of their life. 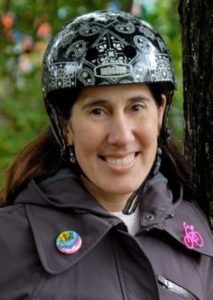 “I have been very blessed that my whole career has been about creating a healthier, safer world for us and our grandkids,” says Mia Birk, who was Portland’s bicycle program manager from 1993-99. Her book, Joyride: Pedaling Toward a Healthier Planet, tells the story of the city’s stint at No. 1 on Bicycling magazine’s list of “America’s Top 50 Bike-Friendly Cities” from 1994 to 2010.
After helping lead Portland’s bicycle revolution, Birk became a principal at the Portland-based firm Alta Planning and Design, where she helps communities across America develop bicycle and pedestrian planning projects.
Birk says cities are motivated to “create a balanced transportation system where people can choose the right mode for the right trip.” She said the serious health crisis caused by sedentary lifestyles has convinced many cities to make bicycle transportation part of that mix. Improving air quality and reducing congestion are other reasons many cities promote cycling.
“My whole career has been dedicated to tikkun olam, of giving back to create a better world,” says Birk. 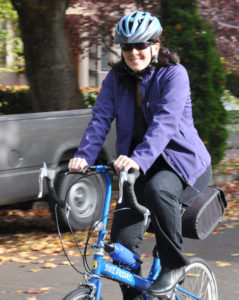 Tikkun olam is also at the root of Rabbi Ariel Stone’s decision to ride her bicycle the two miles to the Shir Tikvah office when she doesn’t have a funeral or meetings elsewhere. Her primary motivation for bicycle commuting is the environment.
“Real tikkun olam goes deeper, Stone says. “When I’m on the bike, I feel better. You can’t heal the world without also healing yourself.”
“It brings you closer to the world when you’re not behind a ton of metal and glass. It brings you more into a sense you are one with the world. It’s meditative.”
Portland psychiatrist Dr. Charles Kuttner also finds bicycle commuting meditative. When he lived in Corvallis, Kuttner regularly commuted to his office on his recumbent bicycle. But now that he lives less than a mile from work, he often walks. He still rides his bicycle to evening minyan at Congregation Kesser Israel, weather permitting. While in Corvallis, he wrote a poem about the meditative nature of bicycle commuting.
Fitness is a major consideration for many who commute by bicycle.
“Bicycle commuting is a great way to get daily exercise, stay connected to the outdoors and reduce our carbon footprint,” according to Dr. Wayne Strauss of The Oregon Clinic and a Havurah Shalom member. “Regular aerobic exercise is crucial to helping us maintain cardiovascular fitness and a healthy weight. I love hearing from my patients who incorporate exercise into their daily routine how much better and more energetic they feel. People often tell me that they cannot exercise due to arthritis, chronic pain or other musculoskeletal conditions. However, almost everyone can work with their medical providers to find exercise that works for them. Bicycling can be great for people with knee and hip pain because it does not have the jarring impact on the legs of other activities.”
For most bicycle commuters, a combination of factors leads them to ride.
Alysa Rose, president of the lighting company Rejuvenation and a member of Shir Tikvah, says she commutes for the environment and personal health. “The spiritual/mental tie directly into acting intentionally and in alignment with my values.” 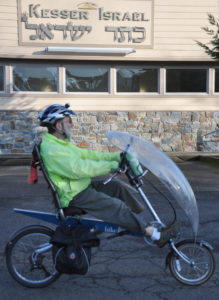 Riding to shul: Charles Kuttner rides his bicycle to evening minyan at Congregation Kesser Israel, weather permitting. Though some cyclists ride to Shabbat services too, Kuttner says he does not ride on Shabbat.

A professional fundraiser at Portland State University, Aaron Pearlman cites personal health, good outlook for the day, environmental concerns and societal change as reasons he is a bicycle commuter. Pearlman, who is on the board of the Jewish Theatre Collaborative said he also sometimes bikes to Havurah Shalom for Friday night services where many of his friends bike “much more than I do.”
“Biking is faster than driving and looking for parking or taking the bus and having to wait at the bus stop,” adds Pearlman.
That same dynamic prompted Rob Sadowsky to begin commuting by bike about 10 years ago when he was working for the Jewish Council on Urban Affairs in Chicago.
“I was working downtown and the 7 miles to my office took 45 minutes to drive or go by train,” says Sadowsky, who is now executive director of the Bicycle Transportation Alliance in Portland. “I could bike and get there in 40 minutes and always arrive at the same time.”
“The first day it took an hour and 20 minutes and I was wheezing,” he says, noting his commute kept getting shorter. “Since I started regular biking, I’ve had no problems with my asthma; I stopped taking medicine. It’s changed my life.”
Sadowsky and Birk are not the only Jews active as leaders among bicycle commuters.
“A bunch of people are active bicycle leaders,” said Scott Bricker, who worked at BTA for 11 years and is now a consultant and executive director of America Walks. He adds that Roger Geller and Linda Ginenthal both work with the city of Portland on bicycle projects.
“I’m not suggesting it’s religious, but there is an identity there,” says Bricker.
On the lay level, BTA board member David Forman is another Jewish leader in the growing movement. Forman, a past president of Cedar Sinai Park, has been commuting to his law office almost daily since September 2005.
“I want to promote a personal sustainable lifestyle,” says Forman, a partner at Tonkon Torp LLP. “I enjoy living in a more urban culture. … Bike commuting seems to provide a sense of community.”
But Forman and Rabbi Stone both summed up their on-going commitment to cycling in similar ways.
“There is just the sheer joy of riding my bike,” says Forman.
And Stone says, “Every time I get on my bike, I feel like a kid again.”

TIPS FROM A NOVICE

By Deborah Moon
THINGS I LEARNED BY LISTENING
Since I had spent the preceding two decades with almost daily knee and/or hip pain due to surgeries after skiing mishaps, I listened very carefully to all tips relating to joint safety and comfort.
I listened to expert advice on what kind of bicycle I should buy based on how I wanted to ride.
I had a fitting at the bike shop to ensure the bicycle was properly adjusted – seat height is important to knee strain/comfort, as well as to efficient pedaling. Then I rode with an expert (my bicycle-racing, European-bike-touring husband) who made micro adjustments.
I listened when told to shift to my easiest gear when climbing a steep hill. It’s much easier on the knees, whether you have joint pain or not.
I listened to advice to STOP at red lights – it’s easy to see that a car is much bigger than my bike; I don’t need to risk my life to try to save seconds.

THINGS I LEARNED THE HARD WAY
When I bought my first road bike nearly two years ago, I had a lot to learn. Some I learned by listening and some I learned the hard way.

Though many experienced cyclists told me I was riding too close to the shoulder, I felt safer trying to stay as far from traffic as possible. Mistake. When my wheel slipped off the road and onto the gravel, I was instantly sent sliding into the middle of the road. Fortunately there was no traffic, but I left a lot of skin on the asphalt. Now I always leave at least a foot between myself and the road edge. That applies to curbs too since hitting a curb with a pedal will also catapult you into traffic!
When approaching a red light, it’s a good idea to have a foot ready to put down because the light might not change to green when you expect it to. Last year I was riding up to a light that I could see had turned yellow for cross traffic. So I slowed down, but didn’t get my foot ready. When the light turned green for left turns instead of for me, I didn’t have time to put my foot down and I fell over – no physical damage, but OUCH, it sure hurt my ego.

THE REWARDS I’VE REAPED
It’s been worth it. Bicycle riding has been a huge help for my joints. After five knee surgeries, if I can do it anyone can. Wish I’d listened to my doctors years ago regarding the benefits of rehab on a stationary bike. Now I can go for weeks without any knee pain.
When I ride my bicycle to work (weather and schedule permitting), I arrive happier and more alert with more energy to start the day.
And I’m as fit as I’ve ever been in my life. The real reward was the joy of riding 770 km on a 10-day bicycle tour of Spain last summer. What an extraordinary way to see a country, and with all that exercise I could enjoy the local cuisine with no guilt.