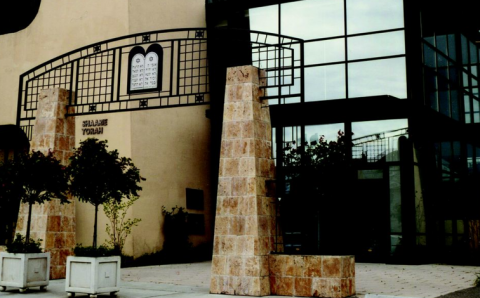 Honoring their 108-year heritage as they step into the 21st century, members of Congregation Shaarie Torah looked to their founding families in deciding to affiliate with the Conservative movement in January 2013. The change will have little effect on the practices of the past 10 years but is expected to have great impact on the visibility of the synagogue, according to co-presidents Richard Cohen and Jordan D. Schnitzer, sons of two of Shaarie Torah’s oldest families.

Rabbi Arthur Zuckerman, who has led the congregation since 2007, captured Shaarie Torah’s blending of the old world and the new when he said, “You can’t have the same focus in a modern society that you had 200 years ago in Europe, and on the other hand you can’t just say, we’re going to give up all of our traditions to live in a modern society. There’s a happy medium – to keep the traditions we have but at the same time to establish new traditions and be able to be a contemporary synagogue in the 21st century.”

“We were losing a lot of identity be- cause people who came into the community didn’t understand what a ‘traditional’ synagogue meant,” said Cohen, referring to the synagogue’s designation since 1975. “And when people called the Jewish Federation or the MJCC for placement for a synagogue, we weren’t on top of the list. They were asking for Orthodox, Conservative, Reform, egalitarian, and we weren’t falling into the categories.” “Until now we were an island unto ourselves,” said Schnitzer. He said he asked Cohen if he could serve as co- president because “there was a lot to do in a short period of time. … I furthermore thought that with the experience I’ve had on the 33 boards I’ve been on, including long stints at the Robison Jewish Health Center at Cedar Sinai Park, MJCC, PJA, Temple Beth Israel, OJCF and Jewish Federation of Greater Portland… I had some strong experience in getting a handle on financial issues and restructuring and repositioning organizations.”

Change came slowly to Shaarie Torah, formed as an Orthodox synagogue in 1905. Cohen dates the first dramatic change to 1946 or ’47, when his mother, Frieda, descended from the balcony of the original synagogue with several other women. They wanted to sit with their husbands, who had recently returned from World War II. Frieda still serves on the board, at age 92. The most dramatic development in the past few years, he said, was “allowing women to have aliyot (reciting a blessing from the bima before a Torah reading). Those would never have happened even in my mother’s day. …There was pressure from within to make some changes. The girls were being bat mitzvah and the parents wanted to be there and participating. … We are becoming more adaptable to the society around us.”

Shabbat morning services are “very traditional,” said Zuckerman. “It’s not a watered down service.The Hebrew prayers are still recited; there are some pieces in English.” At some point, he said, “We will have our own siddur with Hebrew, transliteration and English.”
The synagogue has always kept kosher, and he said, “The level of kashrut has not changed one iota.” The education department’s “focus on Israel has not changed and will not change,” he continued. “We promote trips to Israel for juniors and seniors. If you attend our religious school, you have an opportunity to receive funding for an educational trip to Israel. We have a number of students in the upcoming year who will take their gap year in Israel.”

“Our young people are now affiliated with (Conservative) summer camps; they can participate in larger youth group organizations and have Shabbatons with three or four synagogues in Seattle,” said Schnitzer. “Our education director, Dorice Horenstein, went to a weekend seminar [in Seattle] with other education directors and came back all excited – not that she is ever lacking in enthusiasm, but she was really excited.” With affiliation, the synagogue will also be able to “participate in strategic planning and leadership programs, have greater connections to Israel, connections to more camps – all things our congregants had to seek out in other places,” according to Cohen.
Schnitzer said the synagogue is reaching out to the thousands of unaffiliated families in the region. “We had a program for people who didn’t want to affiliate but wanted their kids in the Sunday School,” he said. “I said we shouldn’t turn any child away from Sunday school; let’s give them free Sunday school for two years. … We raised some money, and we added 20 to 25 kids.” Schnitzer and Cohen characterized the elders of the congregation as “forward-thinking” people who wanted to make the synagogue attractive for their children.

Speaking of his father, Harold Schnitzer (of blessed memory), Jordan said, “Because he trained to be a rabbi until he was 16 … he was very knowledgeable about Jewish history and religion. … He felt that Judaism was organic, it was alive, it changes, it bends. … So he always was a role model for me of not just flexibility but almost a mandate to keep the services and the synagogue fresh with new ideas and new approaches that would respond to the needs of the current congregation … and therefore I, being a student of his, have always taken that same view about institutions. You must maintain the core values, but the institutions are there to serve their public, meaning the public of their time. You don’t change for the sake of change, but you don’t hold back change because in previous generations something was done a certain way.”

Schnitzer, whose two daughters recently celebrated their b’not mitzvah at Shaarie Torah, said his father “pushed very hard … to have women play an equal role in the services at Shaarie Torah. Before my children were bat mitzvah, he would say, ‘I want my children to be on that bimah to be able to do their bat mitzvah, just as if I had grandsons.’” Schnitzer said he believes synagogues and churches are personality-driven, and the most successful are led by charismatic people. “Rabbi Zuckerman has a big personality, as big as his heart, and that’s contained in a man who has been a student of Torah and Jewish history and is extremely knowledgeable and has in-depth, thorough answers to any question I have seen posed to him,” he said. “One of the things I like about him is he leads from the heart. He has taught by personal stories; tears come to his eyes, and they’re real.”

As a boy, Schnitzer said, he belonged to two synagogues. “My mother’s family, Simon and Helen Director, and my mother, Arlene … grew up going to Temple Beth Israel. My father’s family grew up going to Congregation Shaarie Torah; my grand- parents Rose and Sam Schnitzer were the first couple married at Shaarie Torah in 1908. I would go to night services at Temple Beth Israel and day services at Shaarie Torah. … I never saw it as a conflict, I only saw it as being something extra special. And I loved the difference between the two services. … At Shaarie Torah I always loved its music – songs which came not from instruments but from the voices of the members. … And I loved the contained chaos of Shaarie Torah, of people putting their tallises on and off, kids running in, running out – it was more family-like.

“Probably, looking back, it helped me view religion in a very ecumenical way, that there wasn’t just one path, one book, one pulpit. There are a lot of ways to experience Judaism.” “I can’t separate myself from Shaarie Torah because the dust of the place is in my lungs,” said Cohen. “I was a kid running the hallways, I knew every nook and cranny. I used to throw stuff off the balcony when Cantor (Yonah) Glantz was the cantor way back in the old synagogue. Everything about the place is sweet to me. … It’s not hard to be a family here.”
Zuckerman said, “I appreciate the Schnitzer family’s dedication to Shaarie Torah, because – I’ve got to give credit where credit is due – Jordan has learned this from his parents. Rick learned this from his parents. Both these ‘boys’ grew up in the synagogue, and they are continuing what their parents had been doing.”