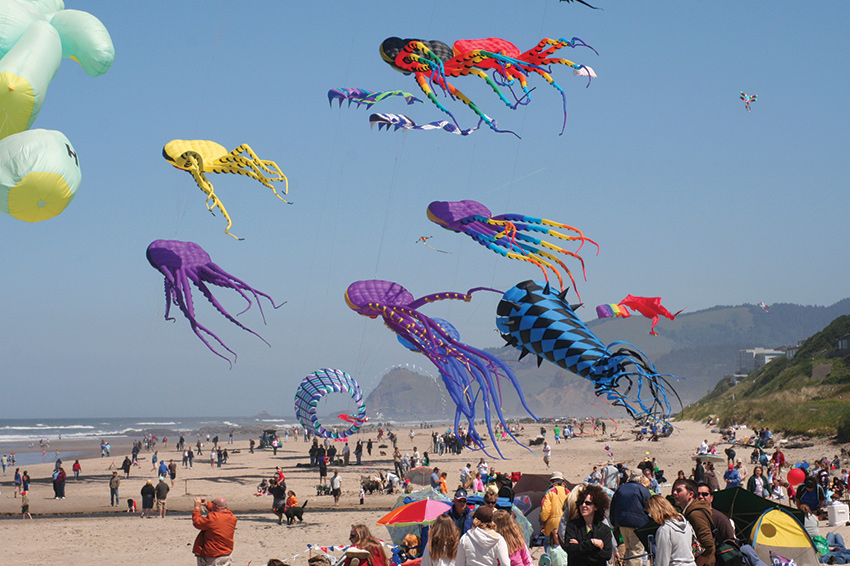 All 362 miles of Oregon’s coast make up one of the most remarkable public recreation settings in the United States. Since the Oregon State Park system manages the Ocean Shore State Recreation Area, the entire coastline from the Oregon/California border north to the Columbia River is open to the public and waiting for you to take a stunning walk along the edge of the Pacific Ocean.

Oregon’s shoreline is a geologic mix of sandy beaches, rocky shores and towering capes rising from the sea. Oregon State Parks reminds visitors, “Whether you’re picnicking, soaking up the sun or watching a spectacular sunset, make sure your trip is a safe one. Watch the ocean for sneaker waves and stay off logs, which can roll.”

There are 255 state parks, including several near the coast. The park system annually serves an estimated 42 million daytime visitors (fourth in the nation) and 2.5 million campers (eighth in the nation). Many people reach the ocean shore by parking at a state park, but county and federal parks, businesses and private homes also lead to the ocean shore.

All along the coast, you can find visitor attractions, art galleries, restaurants and festivals.

One of the largest events on the Oregon Coast is the 31st Annual Summer Kite Festival in Lincoln City June 27 and 28. The Kite Festival takes place right in the heart of Lincoln City at the D-River Wayside State Park. Activities such as kids’ kite making, kite demonstrations and the Running of the Bols, which is a footrace across the beach with each participant harnessed to parachute kites, are fun for the whole family. 800-452-2151 or oregoncoast.org.

At the north end of the state, the Astoria Music Festival maintains a busy, near daily pace of concerts, recitals, discussions and films for 16 days. Fueled by the vision of Artistic Director Keith Clark, the festival encompasses almost every classical form – orchestra, chamber music and opera – June 13-28. Several events are free. The festival draws audiences to Astoria from all along the Pacific coast. astoriamusicfestival.org.

SHABBAT ON THE COAST

While you’re in town, check out the newest congregation in the state. The lower Columbia region is forming Congregation Beit Salmon (yes salmon, not shalom, in honor of being in the salmon capital of world). The congregation invites anyone coming to the north coast to join them for a Shabbat service and oneg. Astoria’s first Shabbat services in about 50 years will be June 13. Services begin at 11 am and are followed by an oneg at Fellowship Hall of the Peace Lutheran Church (at Exchange and 12th in Astoria). The next day at 11 am at the church, participants will decide what events they would like to see over the summer. Hebrew Union College third-year rabbinic student Abram Goodstein will be in town June 9-Aug. 9 (2015) to lead services, family programs and a Wednesday night study group.

Though Beit Salmon no longer meets, services are still held once a month from March to October in nearby Seaside. The North Coast Shabbat Group holds its monthly services one Friday a month at 8 pm at the Bob Chisholm Senior Center, 1225 Avenue A in Seaside. Leaders for summer services in2015 are: June 26, Neil Weinstein; July 31, Rabbi Sam Joseph; and Aug. 21, David Fuks. For more information, call Bev Eastern at 503-244-7060.