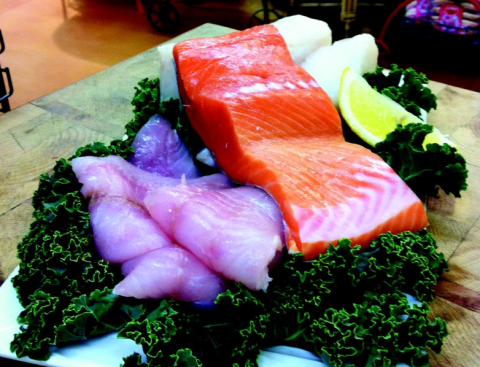 Every year when it’s time to shop for supplies for my Passover seder, I see the grocery store’s annual holiday display made up of boxes of matzah, potato starch, macaroons and potato kugel mix. Invariably included in the arrangement of foodstuffs is the jarred gefilte fish floating in murky liquid. Who actually eats this stuff ? In the words of my 12-year-old, it looks “a bit sketchy!” Our good friend Dan, who is originally from New York, told us the fish is in fact a delicacy and that he once heard a funny story about where these gefilte fish come from. He relayed this story by Lawrence Sherry to us: Many times I have been upset by people who seem to think that gefilte fish is some kind of mixture you make in the kitchen rather than one of the Lord ’s creatures. This has led me to explain exactly what a gefilte fish is.

Each year, as soon as the frost on the Great Gefilte Lakes (located somewhere in the Catskill Mountains) is thin enough to break the surface, frum (observant) fishermen set out to “catch” gefilte fish. Now, unlike your normal fish, gefilte fish cannot be caught with a rod and a reel. The art of catching gefilte fish was handed down for hundreds, maybe thousands of years. You go up to the edge of lake with some matzah and whistle and say “Here boy. Here boy.” The fish just can’t resist the smell of the matzah. They come en masse to the edge of the lake, where they jump into the jars and are bottled on the spot.

Funny story, but since we have no gefilte fishermen in our family and live nowhere near the Catskills, I prefer to make my own! Typically, because it’s more economical, gefilte fish is made with two or three different types of freshwater fish such as pike, haddock and carp. I opt for fish that are indigenous to the West Coast, like Alaskan halibut, lingcod and salmon. I utilize salmon for its beautiful color, fat content and richness, halibut for its creamy texture and cod for its mild flavor. In my recipe melted leeks – which, when slightly caramelized, have a pleasant sweetness – stand in for the onions. For the poaching liquid, you can make your own fish stock or buy a good quality packaged one. The trick to making moist, tender gefilte fish is to poach the pieces at a low temperature and not to let the stock boil too vigorously. It should just be bubbling gently at a simmer on the stove. Cooked too quickly, the fish balls may not remain moist throughout. Serve chilled or at room temperature with red horseradish and garnished with cooked carrot coins.

On the Passover seder plate, haroset symbolizes the mortar used by slaves in Egypt. The classic Eastern European haroset features apples, honey, sweet wine and cinnamon, Although most American Jews are familiar with these ingredients, this is by no means the only combination possible. Walnuts, pine nuts, peanuts, pistachios or chestnuts can be mixed with apricots, coconut, raisins, dates, figs and even bananas. Also intrigu- ing are recipes with spices like ginger, cloves, cayenne and cardamom. Haroset is a tasty snack that can be enjoyed with matzah all week during Passover. Most families have a recipe they have been making for years. This year, try adding just one new ingredient to the family’s traditional recipe. I borrowed my favorite ingredients from this Joan Nathan recipe for Persian Haroset. I love the subtle sweet flavor from the banana and the little touch of heat from the black and cayenne pepper.

GEFILTE FISH
Makes about 20 “egg size” fish balls
1 pound salmon fillet, fresh if possible
1 1⁄2 pounds halibut fillet
1 1⁄2 pounds Alaskan lingcod fillet
3 tablespoons extra-virgin olive oil
3 carrots, separated
3 leeks, white and light green parts, rinsed and finely chopped
1 tablespoon sugar
1 egg
2 tablespoons matzah meal
1⁄2 cup water
2-3 teaspoons kosher salt
2 teaspoons Old Bay Seasoning
12 cups fish stock
Remove any skin and bones from fish and cut into 2-inch cubes. Using food processor fitted with a steel blade, pulse each type of fish separately until ground and place in a large bowl. Heat fish stock to medium high in a large skillet or Dutch oven with high sides and a lid. (You will probably need two.) Heat olive oil in a large skillet on medium high. Grate two of the carrots on the fine side of a box grater. Place leeks in olive oil and soften slightly. Add carrots and continue to sauté until carrots are tender and leeks begin to caramelize, about 8-10 minutes. When cooled slightly, add vegetables to fish along with beaten egg, matzah, sugar, water and spices. Mix gently but thoroughly. Mixture will seem a bit loose. When stock is hot, take a small teaspoon of the fish and drop into stock. Let cook for 2-3 minutes, remove, taste and adjust seasonings. Peel and slice remaining carrot into coins and drop into stock. Using wet hands, scoop about 1⁄2 cup of fish mixture and shape into egg-shaped balls. Gently drop into hot stock in a single layer, trying not to let them touch. Bring stock up to a gentle boil, cover, reduce to a simmer, and cook for one hour. Check occasionally to make sure stock is not boiling too rapidly. When cooked, carefully remove gefilte fish to glass baking dish. Extricate carrots and save. Pour stock over fish and allow it to cool uncovered. Fish can be served chilled or at room temperature.

Lisa Glickman is a private chef and teacher, and she recently made a TV appearance on the Cooking Channel’s “The Perfect Three.” She can be reached via email at lisa@lisaglickman.com.