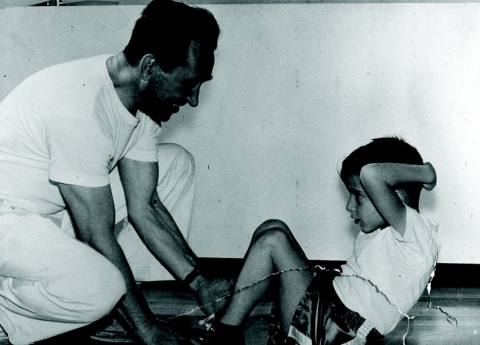 When the MJCC “celebrates champions and honors everyday athletes” at its annual dinner next month, it will be celebrating both its history and its important role in Jewish community life.
Founded in 1914 as the B’nai B’rith Building and now known as the Mittleman Jewish Community Center, the “J” – its shortest moniker – has been at the heart of the community for nearly a century.
In addition to providing a home for community educational, cultural and social groups, athletics and sports have always been essential parts of its mission. “Generations of Jewish children and adults have come to the “J” for sports and athletic endeavors of all sorts,” says Lisa Horowitz, MJCC executive director. “This is just one way in which we’ve long served as a welcoming ‘center’ for our Jewish community.”

The center’s first building, on Southwest 13th Avenue between Market and Mill streets, boasted “one of the finest gymnasiums in the West, furnished complete,” according to a story in The Oregonian. It also had a running track, a 20-by-60-foot swimming pool with springboards “and other paraphernalia,” locker rooms and a billiard and smoking room in addition to various meeting rooms, a library and offices.
It quickly became the go-to spot for everything from club meetings to dances and lectures – and, of course, athletic contests between B’nai B’rith and other Portland teams.
“Basketball teams to meet outsiders are to be organized under the YMCA,”The Oregonian reported, noting that the Y’s Harry T. Smith was helping the B’nai B’rith center run swimming classes and contests for women and girls, various athletics classes for

2013 FRIENDS OF THE CENTER DINNER
“Celebrating Champions/Honoring Athletic Achievement” With a Tribute to Steve “Rosy” Rosenberg And announcing 2013 inductees into the Oregon Jewish Sports Hall of Fame When: Thursday, Feb. 21, 5:30 pm Where: 6651 SW Capitol Hwy., Portland Cost: $90 per person ($40 tax deductible), RSVP by Jan. 31 Nominations for the Harry Glickman Scholar Athletes of the Year due by Jan. 15 For details or reservations – or to submit information about your own sports experiences at the J: Contact Jennifer Baldwin, 503-535-3594 or jbaldwin@oregonjcc.org

In addition to exploring sports and “all-around physical development,” generations of young Jews formed lifelong friendships through activities at the center.
“Those bonds,” observes Judith Margles, director of the Oregon Jewish Museum, “extended into every aspect of home and business life – and to this day sustain and strengthen Jewish communal life in Portland.”
She noted that the first JCC also was a response to prejudice. “Portland’s Jewish community created its own networks to replicate those in the non-Jewish world that excluded them,” she said. “Creating the JCC as a place to make friends and learn and play sports was of paramount importance.” The late Abraham “English” Rosenberg, a former JCC board chair, had his own theory about the center’s success: “[The JCC] became a beehive of activity, because in addition to social activities, it catered to the athletic whims of the younger element,” he said in an oral history in the OJM archives.
Thanks in part to the unstinting efforts of Millicent “Mickey” Hirschberg and Harry “Polly” Policar, who both spent nearly their entire professional careers at the “J,” it developed one of the finest athletic programs in the city, nurturing champions as well as “everyday athletes” in a wide range of sports.

Hirschberg was the center’s swim teacher, and so much more. Born in London in 1901, she joined the center’s staff in the 1920s and initially taught swimming classes. By 1924 she also began running the hydrotherapy program for the Portland Polio Swim Club, and in 1932 she became the athletic director for the B’nai B’rith girls’ camp. She continued working at the “J” through the 1960s, teaching three generations of Portlanders how to swim, and receiving awards and honors both within and beyond the Jewish community. Policar, who attended B’nai B’rith programs as a youngster, became the center’s athletic director in 1933, building the sports program there and directing the B’nai B’rith summer camp. He taught everything from gymnastics to basketball, serving at the center for nearly a half-century, and as camp director for 40 years.
“You know, we were all Polly’s kids,” Milt Carl told the OJM in an interview for an exhibit this past summer on Oregon Jews and sports.

That exhibit, “In the Game,” highlighted local “everyday” and outstanding athletes, many of whom credited their achievements to early inspiration – and training – at the center.
Both Policar and Hirschberg were among the inaugural inductees in the new Oregon Jewish Sports Hall of Fame, launched in conjunction with the exhibit. The 2013 “class” of Oregon Sports Hall of Fame honorees will be announced at the MJCC dinner Feb. 21. “When we first discussed an exhibit about Oregon Jews and sports,” OJM’s Margles recalls, “we worried whether we would have enough material. But as we studied the history and heard story after story, we realized our understanding of the Americanization of young Jews could be seen in a new way. And that the JCC – as a place for friendship, individual athletic achievement and team building – stands at the center of this story.”

Over the years, of course, the center has grown and changed in some significant ways. It moved to its current location on Southwest Capitol Highway in 1971. Five years later, it was renamed the Mittleman Jewish Community Center in honor of Helen Mittleman – in appreciation of a generous donation from her husband, Harry, that paid off the building’s mortgage.
In 1987 the center added a new wing to provide a permanent home for Portland Jewish Academy, a community day school that now offers a strong preschool through eighth grade education. (Use of the center’s sports facilities has always been a plus for PJA – which now boasts basketball and cross-country teams.) The Early Childhood Learning Center, now also under the PJA umbrella, opened in 1996.
From 2005-2007, the center underwent a major renovation, updating PJA’s facilities, adding a new lobby, a kosher café (the only one in the state), a new ballroom, new locker rooms, spa facilities, a cardio-weight room, exercise rooms and a renovated gymnasium. “We’ve long been the ‘living room’ for our community,” says Horowitz, who became MJCC executive director in 2007.

“Hundreds of people come through our doors every day for classes, athletic activities, meetings, special events and programs – more than 9,000 unique visitors annually.” Horowitz says she especially enjoys the variety of activities at the J. “In the course of one week we might have Torah study, a solidarity rally for Israel, a PJA Dragons basketball game and spontaneous mah-jongg games in the café,” she said. “This is a vibrant place that truly reflects our community’s energy and vitality.” To highlight the center’s celebration of “everyday athletes,” MJCC members, guests and donors are invited to submit their stories to the “J” in advance of the dinner – via the center’s website, oregonjcc.org, its Facebook page or in person at the center. The “J” is also seeking nominations for the Harry Glickman Scholar Athletes of the Year, who will be announced at the Friends of the Center Dinner. The awards, presented in cooperation with The Oregon Jewish Sports Hall of Fame, will honor a high school boy and a high school girl for academic and athletic achievement, as well as commitment to community service. Nominations may be submitted through the MJCC and must be received by Jan. 15.