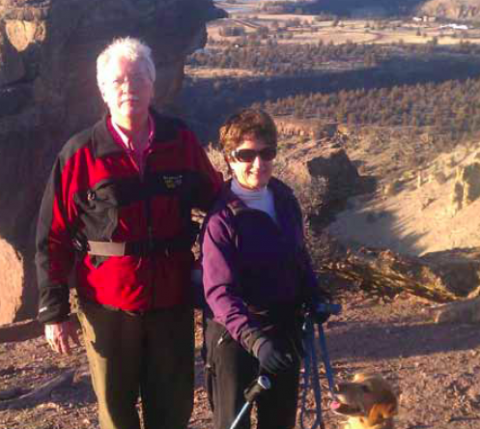 With its pristine environment, breathtaking scenery and wealth of outdoor activities, Bend is one of the most popular vacation destinations in the Pacific Northwest. No matter what the season, visitors can enjoy a diverse range of activities such as cross-country skiing, hiking and even llama-riding. Young professionals, families and active retirees are increasingly finding their bliss in the heart of Central Oregon. In addition, the city of Bend is home to a thriving, growing Jewish community that now includes three synagogues. Gary Reynolds, an outdoorsman who has lived in Bend for five years, sings the city’s praises. “It became the retirement dream,” he explains. “There are a zillion things you can do here if you’re interested in the outdoors.”

At 66 years old, Reynolds maintains a vigorous athletic regimen that includes running, biking, hiking and kayaking. He is currently in training for the annual Pole Pedal Paddle, which requires participants to finish a strenuous routine of alpine skiing, skate skiing, road biking, running and kayaking. Last year Reynolds placed first in the 65-69 age group. “My time was about two hours and 39 minutes,” he says proudly.

Local Realtor Lynne Connelley discovered Bend after seeing a magazine article that ranked the 10 best cities for outdoor enthusiasts. She now entertains her grandchildren there every summer. “It’s like grandma and grandpa camp,” she jokes. Connelley waxes lyrical about the charms of Bend. “I’m driving west right now, and I see a mountain range, the Cascades, with white peaks, white snow all year round. The Deschutes River runs right through the center of town. You can take your kayak and paddle up and down the river, a couple bands will be playing — it’s just a typical summer evening. There’s rock climbing, miles and miles of hiking, wilderness, the Deschutes (River) and Ochoco National Forests. It’s a healthy culture.”

Connelley incorporates her love of the outdoors with charity work. A former horse and llama tour operator, she now donates her services to fundraisers for Temple Beth Tikvah, the local Reform synagogue. “For silent auctions, I will give away a llama hike. We put drinks on the llama packs, pick one of the Cascade Lakes, walk a trail, have lunch and come back. It’s called ‘The Llama Schlep.’ ” For real estate perspectives, Connelley may be
contacted at lynne@mybendproperty.com.

Fitness author Suzanne Schlosberg and her family find a lot to love in Bend. Previously based in Los Angeles, she has now lived in Bend for nine years. This year Schlosberg celebrated her birthday there. “I had the most awesome Bend day. I went running on the river trail in the morning, went up skiing with one of my boys, and then rode my bike to a coffee place where I worked all afternoon. You can just go up and ski for two hours, and not eat up all your whole day, everything’s just so convenient. And there’s no traffic and no smog.”

When seeking a new place to live, it was important to Schlosberg that she find a Jewish community. “I wanted to make sure that there was a synagogue. I am on the board of Temple Beth Tikvah; we’re celebrating our five-year anniversary in June.” The synagogue honors residents’ love of the outdoors by hosting a series of Sabbath picnics during summer; Sunday school hours in winter allow for skiing schedules. Says Schlosberg of her family’s experience in Bend: “My twin boys are really into skiing, and they just got mountain bikes. They’re in training to be little Bendites. I’m so envious that they get to grow up here, with all the things they get to do. I really can’t imagine living somewhere else.”