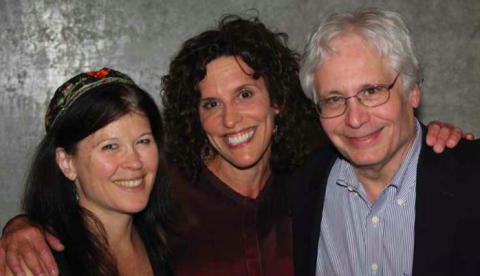 April 12 Congregation Shir Tikvah marked Passover with a rather unusual event. While most Jews spent the holiday celebrating our long-ago liberation from slavery in Egypt, Shir Tikvah spotlighted a contemporary story: the celebration of American society’s shift in attitude toward equal rights for all, particularly those in the LGBTQ community.

“This program is connected to Shir Tikvah’s core mission,” says Rabbi Ariel Stone. “We see ourselves as a congregation that is open and affirming, and we felt that this event gave us a chance to further the goal of equal marriage rights.”

The program, billed as “Timeless Stories of Transformation Bring Moses, Will & Grace to Portland,” featured Oregonian columnist David Sarasohn interviewing award-winning sitcom writer Tracy Poust (rhymes with Faust) at the Wieden + Kennedy atrium in the Pearl District. Poust, along with her writing/producing partner Jon Kinnally, is best known for writing and producing the groundbreaking sitcom “Will & Grace,” which Vice President Joe Biden singled out as the most important reason for the shift in Americans’ opinion on gay marriage. Poust and Kinnally also have produced “Ugly Betty,” “Love Bites” and their latest comedy, “The Crazy Ones,” starring Robin Williams.

Sarasohn and Poust discussed the evolution of sitcoms, and how universal stories and characters – whether drawn from ancient or modern life – help people gain perspective on their own and others’ humanity. Poust demurred when asked if she agreed with Biden’s assessment of “Will & Grace,” but she did acknowledge the importance of the show in helping to change peoples’ attitudes. “We were a part of it because we were on prime-time TV and people realized that these characters were just like us, except funnier. We helped create a hit show about gay guys and a woman who loved a gay man, and that made people realize they knew people who were gay.” “Will & Grace” debuted on prime-time television in 1998. It went on to become the highest-rated sitcom from 2001 to 2005, and over the course of its nine-year run, the show garnered 16 Emmy awards and 83 nominations.

Rabbi Ariel Stone suggests “Will & Grace” played a more nuanced role in the change of minds and hearts about gay rights. “Was ‘Will & Grace’ a harbinger? Was it part of the cause of the shifting attitude or simply a reflection of it?” she asks. “It’s possible that the real work of changing opinions is being done by many committed activists, people who have spent generations lifting up love. When you realize that someone you love is gay, you begin to think differently about gay people. That change of heart can happen very quickly.”

Like anyone trying to succeed in the cutthroat world of network television, Poust and Kinnally started out hoping to write a funny show that would resonate with audiences. But Poust, who’s been in the business 20 years, says there’s more to good comedy than jokes. “Comedies that last are the ones that have heart, where you care about the characters. They need to be more than just funny,” she says. “Comedy has to be personal.”

Proust goes on to explain that the writers have to care about the comedy they write, beyond merely wanting to make people laugh and score high Nielsen ratings, and the work itself needs to touch something personal in viewers, so they can both relate to and care about it.

“When we started, no one knew what public reaction would be to W & G,” Poust recalls. “Little by little we got reactions; people were oddly supportive of the show and we got lots of positive letters, but we certainly didn’t know at the time when we started that we were making a difference in American opinions. It wasn’t an ‘issue of the week’ kind of show.” Over time, especially after its first Emmy nomination, “Will & Grace” made being gay an everyday aspect of life.
Poust and her sister, Julie, a member of Shir Tikvah, were raised assimilated, without much connection to formal Judaism. Observant or not, Rabbi Stone thinks Jews as a group tend to be more supportive of gay marriage than other people of faith, because Jews see any fight for civil rights as analogous to our own struggles. “We’ve been there; it rings a bell for us,” she explains. “This is true of Jews from the middle of the political and religious spectrum all the way to the far left. It may also be true of Jews on the political and traditional right, but their rabbis are struggling to find the religious language to express that acceptance and the religious theology to back it up. They haven’t found a way yet, through halacha, to reach that place of acceptance.”

The audience of several hundred people packed the benches in the Wieden + Kennedy atrium, and less than half were members of Shir Tikvah. “We were surprised by how diverse the audience was beyond our congregation, but the most important result of this event was to see how far we’ve come,” says Rabbi Stone. “It was a night for celebrating and supporting the morale of people whose hearts are in the right place.”