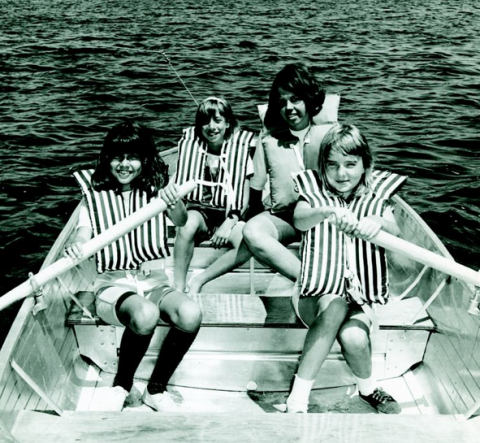 For generations of Jewish youngsters, summer camp has opened new worlds, broadened vistas and created opportunities for lifelong friendships. That was the goal – when the B’nai B’rith Camp started in 1921 in Oregon, when Sephardic Adventure Camp and Camp Solomon Schechter began in Washington a generation later, or as re- cently as 2007, when URJ Camp Kalsman began, again in Washington state.
“Camp is invaluable,” says Sue Friedman of Portland, now 84, who has been a camper, counselor and program director at the B’nai B’rith Camp, which her father helped launch. “Every kid ought to go.”

The B’nai B’rith Camp – affectionately known as “BB Camp” – is one of the oldest and most successful camps on the West Coast. Leaders of Portland’s Jewish community made Jewish camping a priority soon after the B’nai B’rith Center – now the Mittleman Jewish Community Center – opened its doors nearly a century ago. Initially, according to Michelle Koplan, the camp’s execu- tive director, the aim was to help immigrant youngsters from old South Portland – to combine a summer vacation with opportunities for sports, socialization and the kind of learning that best takes place when young people can learn from and with each other in a supportive environment.

Jewish camping, in Oregon and elsewhere, was part of a new national interest in the outdoors. “The child is a creature of habit,” an early BB Camp brochure proclaimed. “[Our] particular task is to help cultivate the worth-while habits of thought and action.” In its first years, BB Camp rented sites in Southwest Washington and Neskowin. In 1925 Julius Meier, who later was to serve as Oregon’s governor, and other family members do- nated property on the east side of Devils Lake, near present-day Lincoln City, in memory of their mother, Jeannette Meier. They also donated about $5,000 to help equip the property, aided by additional donations from some 85 families.

According to another early camp bulletin, BB Camp drew only 15 campers in its first year. In 1924, however, the camp had to set up six pup tents to accommodate the 65 boys who signed up – “The camp this year is said to be the most successful ever,” The Oregonian noted.
By its fourth season, 125 boys and girls – in separate sessions – came to the camp, then at Neskowin. The camp drew youngsters from throughout the Northwest – including five from the Centralia-Chehalis area in Washington, and one boy from Colfax, WA, 424 miles away.
The program, even in the camp’s infancy, was ambitious: early to rise, “setting up exercises,” a big breakfast, fishing, hiking, swimming, boating, games and sports – and of course, an evening campfire, songs and storytelling. There were one-act plays and pageants, “circles” in Jewish history, nature study and health education, among other activities.

As for food: “Nothing but the best is served.” Campers remember “rustic” experiences – the lack of real windows in the cabin and taking “baths” in the cold lake. But most especially, they remember the joys – despite the challenges – of being outdoors, of learning to get along with new acquaintances, of spreading their wings. “Camp opens you up to new experiences and to new people,” says Friedman, whose children and grandchildren are also BB campers. “It’s wonderful all around.”

Koplan, BB Camp director since 1999, is also a former camper, counselor and current camp parent. She notes that camp has changed – there are, among many other amenities, very comfortable cabins, indoor showers and a swimming pool – but the mission remains essentially the same: “To provide safe, nurturing and fun experiences in a welcom- ing environment that inspires individual growth and enduring Jewish identity.” The camp went coed in the early 1970s, added new options for first-time campers and special needs youngsters, and started a day camp for children, many non-Jewish, in the Lincoln City area. It’s also added an annual women’s retreat and family camp, among many other offerings. BB Camp converted to a kosher kitchen several years ago – for the first time in the camp’s history. Today more than 500 campers attend BB’s summer residential camps, coming from throughout the United States and even from France. The day camp draws another 200, and programs renting the camp reach nearly 3,000 more. The camp had a long affiliation with the MJCC but became
independent in 2009, when the B’nai B’rith Men’s Camp Association purchased the camp property and operations, es- tablishing it as an independent, community-based Jewish camp. It is currently affiliated with the Foundation for Jewish Camp and the national Jewish camping movement.

Now more than ever, Koplan says. She points to recent studies showing that seven of 10 Jewish leaders in their 20s and 30s attended Jewish summer camp; that one of three Jewish profes- sionals (rabbis, cantors or teachers) started out as counselors at summer camps; and that adults who have been to Jewish camp are more likely to identify as Jews, marry other Jews, be religiously active and otherwise have stronger Jewish affiliation.

And, she notes, camping and camping choices are growing. According to the Foundation for Jewish Camp, more than 70,000 kids attended a Jewish overnight camp in 2010, and there are more than 150 nonprofit Jewish camps operating in North America – in 27 U.S. states and in six Canadian provinces. But as Koplan looks to another summer of BB Camp, she remains focused on her camp’s history and mission.
“We want to build Jewish identity,” she says. “And we’ve always opened our doors to everyone.”