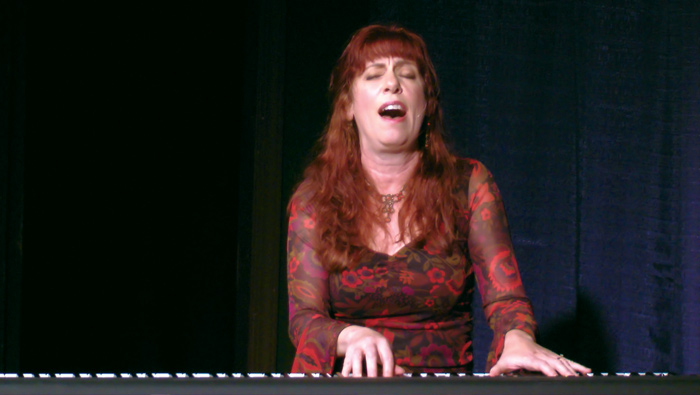 Laughter is often called the best medicine. A free performance in April not only uses the power of humor to heal, it also uses comedy and music to inspire women to seek a potentially life-saving genetics screening.

On April 3, Seattle actress Eva Moon brings her one-woman show, “The Mutant Diaries: Unzipping My Genes,” to a Portland audience for the first time. She calls the show “the culmination and extension of all my work to date.”

“I had played daughter, mother, lover, wife, woman,” says Eva in the artistic statement on her website. “Then I was unexpectedly given the role of fighter, battling through a full hysterectomy and double mastectomy to avoid near certain odds of cancer – all while my mother was dying of cancer herself. … Through my art, with music and laughter instead of lectures and preaching, I deliver an uplifting message that it is possible to change your future.”

In a phone interview, Eva said she created the show in 2012 while her mother was in hospice dying from cancer due to the BRCA genetic mutation common among those of Ashkenazi Jewish ancestry, including herself.

“My first dress rehearsal was at her bedside in hospice,” says Eva, noting her mother had by that time lost her voice. “Nothing can compare to the emotional impact of doing it for her. She smiled and cried. It was very emotional for her – in a good way.”

Since then Eva has shared that emotional experience with dozens of audiences.

When Portlander Patty Magid-Volk saw a DVD of Eva’s performance, she knew she had found a creative way to share a message that likely saved her own life.

When Patty’s sister learned she had a BRCA1 mutation, she urged her family to have the genetic screening. Patty’s test also came back positive. Three months earlier, her annual mammogram had revealed a 2½-centimeter “benign cyst.” But geneticist urged Patty to go in for a breast MRI based on her genetic predisposition for breast cancer. The MRI revealed a 4½-centimeter tumor. The rapid growth that had been mistakenly diagnosed as a cyst meant the lump was really a very aggressive form of cancer common in those with BRCA mutations.
“Finding out I had the mutation probably saved my life,” says Patty.

Since then Patty has been active in encouraging other women of eastern European Jewish ancestry to be screened for BRCA1/2 mutations. An estimated 1 in 40 Jews carries a mutation in the BRCA1 or BRCA2 gene that can trigger breast, ovarian and other cancers. Both men and women can carry the mutation and pass it on to their children; men with the gene also have increased risk of some cancers. Patty became the Portland representative of Sharsheret (sharsheret.org), a national Jewish nonprofit that supports women who are BRCA1/2 positive, are undergoing cancer treatment or are cancer survivors. Patty also organizes an annual event to spread awareness of the genetic risk in the Jewish community.

“If someone can find out that they have significantly elevated risks of breast or ovarian cancers from the BRCA mutation, they can then better manage how to deal with those risks with the assistance of professionals in our community,” says Patty.

Last year she organized an informational event at the Mittleman Jewish Community Center with geneticist Dr. Dana Kostiner Simpson and a panel of Jewish women affected by the BRCA mutations.

“This year I was looking for a creative way to get the word out and think that Eva Moon’s one-woman musical is a great way to convey this information,” says Patty, adding she hopes it will attract younger women who need to know they may be at increased risk of developing cancer.

The performance will be followed by a 20-minute Q&A session with Eva and a genetics professional.

The theater holds 120 people. Admission will be on a first-come, first-seated basis. In addition to the grant from JFGP, the event is sponsored by the MJCC, Sharsheret and the Jewish Theatre Collaborative.

The Mutant Diaries: Unzipping My Genes

COST: Free; courtesy of a grant from the Jewish Federation of Greater Portland