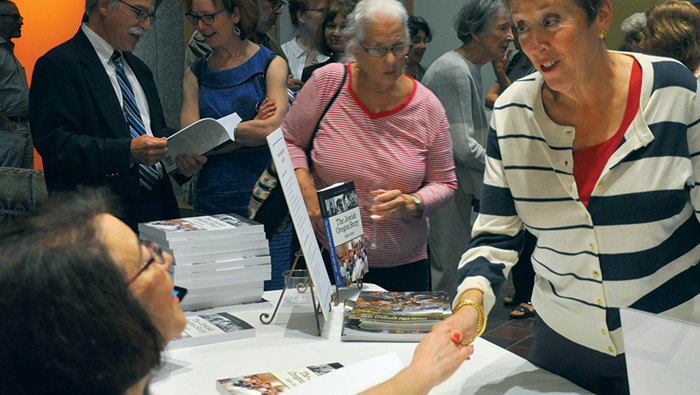 The long-anticipated sequel to The Jews of Oregon: 1850-1950 received a rave review by the man who was the driving force in its creation.

Rabbi Joshua Stampfer was speaking to a crowd that had begun arriving nearly an hour before the launch party for The Jewish Oregon Story 1950-2010 was slated to begin. “We are rejoicing to have in our hands this remarkable account of our community from 1950 to 2010,” he said.

Rabbi Stampfer described the first book by Steven Lowenstein, z’l, as “sheer pleasure with hundreds of beautiful pictures” and stories. But he praised author Ellen Eisenberg for providing something even more important – an understanding of history – in the second book. Rabbi Stampfer received one of the first copies off the presses at Oregon State University Press, which published the book in cooperation with the Oregon Jewish Museum and Center for Holocaust Education.

“It is one thing to know history – when, where and what happened – but to me it is more important to know why,” said the rabbi, who founded the OJMCHE and several other organizations profiled in the book. “She enabled me to understand why the Oregon Jewish community is the kind of community it is. … I wanted to know (the) why to plan for a better future. This is what she provided me and what you have in store for you.”

Alice Meyer, who chaired the committee to commission and publish the sequel, had introduced Rabbi Stampfer by saying, “His vision, his enthusiasm and his determination brought this book to fruition.”

The book was commissioned by OJMCHE as a sequel to the first book published in 1987, but Ellen describes it as a companion piece to her own 2015 book Embracing a Western Identity: Jewish Oregonians 1849-1950, which has a similar thematic approach to history rather than the chronological community history of Lowenstein’s work. “Book two is a sequel to both,” she said.

Noting this was her first foray into recent history, Ellen said it was exciting to celebrate with so many, yet also “terrifying to talk about history to people who were there.”

Without the archives of the OJMCHE and its records from the Jewish Historical Society of Oregon, Ellen said the book would not have been possible. In the countless hours she spent in the archives, she said she learned “things look different here.” She said Oregon’s Jewish community reflects both national Jewish trends and the journey of Oregon “from staid to hip.”

“The Jewish community influenced and reflected those changes,” she said.

The Jewish Oregon Story is available online at ojmche.org/books/the-jewish-oregon-story for $24.95; shipping is $2.