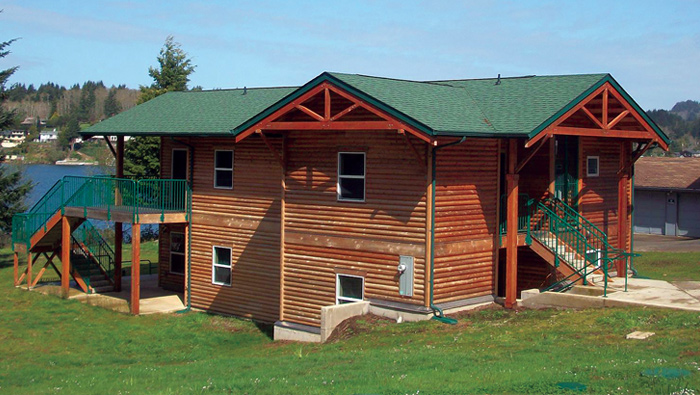 CAPTION: B’nai B’rith Camp received a $150,000 grant from the Marcus Foundation in Atlanta to help build this first double cabin, which will serve as a model the camp replaces all its cabins with double cabins. The Avi Chai Foundation has provided a total of $900,000 in three interest-free loans, which combined with another anonymous $750,000 interest-free loan, will enable BB Camp to begin construction projects without waiting for the money to come in from pledges that are on a three- to five-year commitment.

If you’re a national philanthropist with an idea to enhance Jewish camping, who ya gonna call?

Over the past decade, Oregon’s B’nai B’rith Camp has attracted interest, grants, fellowships and loans from national foundations, organizations and philanthropists. At the 2005 national conference hosted by the Foundation for Jewish Camp, BB Camp Executive Director Michelle Koplan and Irv Potter, chair of B’nai B’rith Men’s Camp Association (the parent organization of BB Camp), met Harold Grinspoon. Since then Harold Grinspoon Foundation’s program, which is dedicated to the sustainability and vitality of Jewish summer camps, has become known as a leader in the field and is now called JCamp180. And BB Camp, Michelle and Irv have gained national reputations for cutting-edge programs.

“When I came to FJC six years ago, my predecessor suggested that Michelle, Irv and the BB Camp team would be good resources for me as I began to navigate the field of Jewish camp,” says Jeremy Fingerman, CEO of FJC, which was founded in 1998 to help nonprofit Jewish camps in North America promote excellence in their management and programs. “He was so right! They have become a trusted source of feedback on ideas and opportunities for the field.”

At the helm of BB Camp for 18 years, Michelle says she has seen how much FJC and JCamp 180 have revolutionized and professionalized nonprofit Jewish camps. Michelle was tapped to participate in the first cohort of the FJC’s Executive Leadership Institute. And after meeting Grinspoon at the FJC conference, Michelle says she received a call from one of his foundation’s leaders, and following a two-hour interview, he told Michelle “Harold has asked if you’d like to become one of ‘his camps.’ ”

The early relationships with both foundations have put BB Camp in the enviable position of attracting national funding. From 2005 to 2010, Michelle, Irv and other professional and lay leaders at the camp developed solid reputations and relationships and received numerous grants.

Since 2010, BB Camp has received more than $235,000 in grants coordinated by FJC. Those grants have included funding to locate and provide scholarships to Jewish families in rural areas and from Russian-speaking homes, who might otherwise not consider sending their children to a Jewish camp. FJC and the Ruderman Foundation selected BB Camp as one of six camps nationally to hire a year-round inclusion specialist to improve services for children with special needs or abilities.

BB Camp has received more than $250,000 from the Harold Grinspoon Foundation, as well as training support.

Recognizing that many Jewish camps had long histories and needed physical upgrades to their facilities, Harold Grinspoon has focused on helping camps improve their physical structures and business practices, including database systems. His foundation pays for a business consultant that is on call for BB Camp for help with governance, strategic planning and fundraising.

“Since BB Camp is willing to innovate and adapt best practices early on, I’m often referring other camp leaders to give BB Camp a call to pick their brains and learn from their experience,” says Julia Riseman, the Grinspoon Foundation’s strategic planning consultant assigned to BB Camp. “That word of mouth, not just from funders but from other camp professionals, is how BB Camp has become so highly regarded nationally.”

JCamp 180 Director Mark Gold agrees with Julia. “The fact that BB Camp has been so receptive to our program offerings continues to challenge us to offer added areas of support to camps such as this,” says Mark. “Harold Grinspoon believes that overnight summer camps provide an unmatched opportunity for Jewish children to be exposed to Jewish values and Jewish learning. … The JCamp180 program is designed to help the lay leaders of these nonprofit camps address the issues that limit their ability to attract and retain campers.”

Julia says over the seven years she has worked with BB Camp, she has come to realize that it is a special place. Julia has been involved with about 15 of the100 camps the Grinspoon Foundation works with across North America.

“BB Camp is special in many ways,” Julia says. “But what stands out in my mind is three things: Welcoming: The camp serves campers across the Jewish spectrum and is especially welcoming to campers who would not otherwise have an immersive Jewish experience because their family is unaffiliated, intermarried or lives isolated from other Jews. Affordability: The board is dedicated to keeping camp affordable to middle class families. Dedication: And of course, the Men’s Camp. This is a group of men across every generation that has met each year for a week at camp for over 80 years. These men are campers their whole lives, and their love for the place is limitless.”

Other national support has come through the Jewish Community Centers Association, which provides many program grants, conferences and trainings. For the past five years, BB Camp has received the Chizuk Fellowship grant to help fund a Jewish educator and programming.

Over the years, tens of thousands of incentive grants for first-time campers have come through FJC, the Jim Joseph Foundation and now the Jewish Federation of Greater Portland.

In addition to attracting grants from national Jewish foundations, BB Camp has also attracted attention from outside the Jewish world.

The camp’s special needs programming, developed with the JFC/Ruderman grant, attracted the attention of the National Inclusion Project – a foundation started by “American Idol” star Clay Aiken. From 2014 to 2016, BB Camp has received training and $22,500 from this non-Jewish foundation for inclusion programming.

With so much national attention, BB Camp leaders are also often asked to present sessions at national conferences. Michelle has been a frequent presenter at JCamp 180 conferences and has presented programs on increasing camper engagement and strategic planning at FJC’s National Leaders Assembly.

Michelle says she believes it is important to take camp staff and lay leaders to such conferences. The knowledge they gain and the pride they develop after seeing how highly regarded BB Camp is nationally are very valuable.
“I think it is a disservice not to take lay leaders,” she says.

Given that Jeremy, Mark and Julia all praise the engagement of BB Camp’s lay leaders and call them a key strength of the camp, Michelle’s approach seems to be paying off.

“BB Camp’s lay-professional partnership is one of our best examples of a successful team,” says Jeremy.

Julia adds, “In my experience, some camps prove themselves to be so wonderfully responsive that it is a pleasure to work with them and help them to succeed. BB Camp is one of them.”