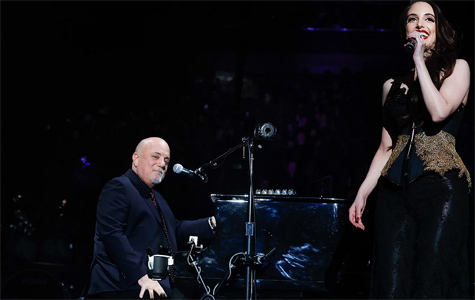 These two have undeniable father-daughter love!

Commenting on a post about Billy Joel’s habit of gifting tickets in the front row to those in the nosebleeds, his daughter Alexa Ray Joel had some kind words to describe him.

“A Real Mensch!” the daughter of Joel, 71, and Christie Brinkley commented on the post, using a Yiddish word that means “a good person.”

The post describes how the Piano Man “never sells tickets to the front row of his concerts.”

“He got tired of all the bored, rich people staring up at him — so now, he sends his road crew out to bring down the fans from the worst seats so there’ll be ‘people in the front row that are really happy to be there, real fans,’ ” the caption reads.

The post takes elements from a 2015 Billboard cover story where Joel talked about the “good spirit” on his tours and his distaste for scalpers.

“We never sell front rows, we hold those tickets at just about every concert,” he told the magazine at the time. “For years, the scalpers got the tickets and would scalp the front row for ridiculous amounts of money.”

Joel goes on to explain that he “got sick” of watching rich people sitting in the front row of his shows without making noise and standing up as he performed.

“It turns out the real fans were always in the back of the room in the worst seats,” he explained. “We now hold those tickets, and I send my road crew out to the back of the room when the audience comes in and they get people from the worst seats and bring ’em into the front rows. This way you’ve got people in the front row that are really happy to be there, real fans.”

In the same interview, Joel expressed his discontent for scalpers and the lax enforcement of scalping laws, which often drive up ticket prices.

The new post — and touching comment from his daughter — comes just a few weeks after Joel stopped at a discarded piano and gave some lucky ones an impromptu show.

“The action is good,” he says in the video. “It just needs tuning, and the finish is beat. It’s a perfectly good piano. It’s a shame to throw it out.”

Alexa Ray, 34, has had a family-filled summer after postponing her wedding due to the pandemic. In July, her mom Brinkley shared that she gave Alexa a haircut.

“Hair Today Gone Tomorrow!” posted the 66-year-old supermodel, sharing several photos of Alexa posing. “Alexa Ray asked me to cut her hair because she wanted a change…she wanted Sass with Class ? and I think we did it ! Et Voilà! My beautiful baby!”

Speaking with Extra, Brinkley shared that she was spending the summer with her children — as well as their respective significant others — isolating together in the Hamptons, and that the group was “doing very well.”

“We count our blessings,” she said. “We’re healthy and that’s what’s the most important, and then we’re together and that’s wonderful.”