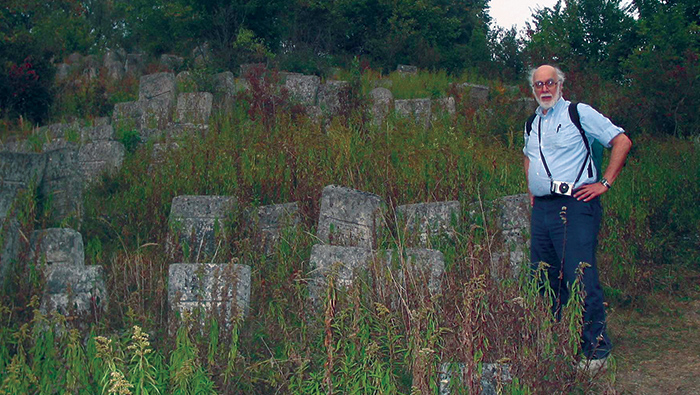 When Ron Doctor earned his Ph.D. in nuclear engineering in 1967, he became known as Dr. Doctor. He would not learn until many years later that in so doing he was mirroring his ancestors, who also had a surname that reflected their professions.
Near the end of his lengthy career in the energy industry and as a professor, Ron began researching his genealogy – a passion that culminated in a lifetime achievement award from the International Association of Jewish Genealogical Societies earlier this year (see box).

His career began at the Rand Corporation, where he managed major energy projects and testified to legislative committees in Oregon and Arizona on energy issues. He then served six years on the California Energy Commission and after that was the executive director of the Western Solar Utilization Network.

In 1990, he received a master’s degree in library and information science – which not only launched his next career as an associate professor at the University of Alabama, it also provided expertise for his genealogy avocation.

Ron and his wife, Judith “Dusty” Trenberth, moved to Portland in 1997. They had married in Portland in 1982 while Ron led Western SUN, one of four solar centers created by President Carter.

“I had recently gotten into family genealogy,” says Ron. When he contacted the Jewish Genealogy Society of Oregon, he was soon drafted to serve on the board of the “group of 10 people with like interests.”

For a number of years, Ron served as president of the group, which at its peak had about 90 members and now has about 75 members.

In the late ’90s Ron’s first talk to the group cautioned people not to go online for their research. “Now it’s a little different,” he says with a smile. “Now you can find a lot of info online. So many volunteers are creating new databases and name lists.”

His leadership of a volunteer group researching the Kremenets District was a major part of his lifetime achievement award. The group now has an email list of 581 individuals who trace their ancestry to the Kremenets District. “Dozens of people are involved in the work I’m recognized for with this award. … Amazing translations are getting posted and we keep growing,” say Ron.

Ron has been to the Kremenets District and Ukraine four times – the first trip in 2002 and the last in 2007. He lucked upon an amazing driver, bodyguard and guide named Alex Dunai. “Alex has helped a lot of people,” says Ron.

In his online Ukraine Journal, Ron recounts meeting Alex on that first trip:

“During a break in the conversation, Alex pulled out three pieces of paper. He already had done some of my research at the Archives in Ternopil. He located a record from the 10th Revizskaya Skazka (census) in 1858 that takes my Doctor line back two more generations to my 4th great-grandfather, Hirsh Diokhter, born about 1771. …Alex also found an 1858 census record for the Vurers, my paternal grandmother’s family. This takes my Vurer line back two more generations, to my 3rd great-grandfather, Yos’ Vurer, born about 1807.”

Ron has since traced the Vurer line back to the mid-1700s and the Averbakh line to the early 1700s.

He learned the Doctor name was originally Diokhter, from the Russian word for tar. Apparently, he says, some of his ancestors made wood tar as a lubricant for wagon wheels. Vuher means wagon, with the name drawn from his ancestors’ work as carters.

“It’s an interesting combination,” says Ron. “All are from a small areas in western Ukraine that was then part of Poland.”

Likely those professions are how the Diokhter family and the Vuher family met and merged.

“People got surnames for their professions,” says Ron of the common practice. Coming full circle, Dr. Ron Doctor made his profession fit his name too.

“In recognition of his lifetime of service to Jewish genealogy through his leadership as president of the JGS of Oregon and the Kremenets District Group, Ukraine SIG leader and service on IAJGS committees. He has worked tirelessly to elevate and enhance the Ukraine SIG; energizing volunteers, nurturing the formation of numerous town research groups, made hundreds of thousands of vital records accessible and provided online availability of Ukrainian information available through an agreement with the Central Archives for the History of the Jewish People (CAHJP) in Jerusalem. So many individuals are indebted to Ron for his help in discovering their ancestors.”