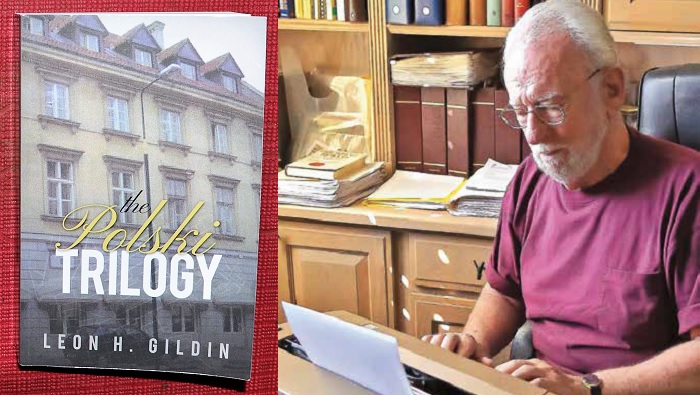 PHOTO: Leon Gildin still uses the IBM Selectric typewriter he brought home when he closed his law ﬁrm in 1996 after practicing for more than 40 years.

Author Leon Gildin, 89, enjoys discussing his new book, The Polski Trilogy, which begins with his award-winning fictionalized account of the real Hotel Polski, where many survivors of the Warsaw ghetto were lured by the Nazis with promises of exit visas. While many were sent to their deaths, some did receive the foreign papers of deceased Jews and were able to emigrate.

In addition to the 2009 novel The Polski Aﬀair, which won the International Book Award for Historical Fiction in 2010, the trilogy includes the sequel, The Family Aﬀair, published in 2011, and the new conclusion of the family saga, The Final Affair.

Leon also is the author of You Can’t Do Business (or most anything else) Without Yiddish (published in 2000 Hippocrene Books) and The Poems of H. Leivick and Others: Yiddish Poetry in Translation (published in 2015 by Finishing Line Press).

I read the first two novels in the new trilogy for a profile of Leon and his work in 2014.

Though the subject is obviously horrendous, I really enjoyed the first book’s tale of the Jewish partisan Rosa, who is sent to the hotel to spy for the partisans but gets caught in the hotel’s web. Rosa and her friend, Itzhik, whose spouses and children were killed by the Nazis, get coveted exit visas with new identities (Anna and Chaim). When Rosa/Anna is called to testify at the hotel commandant’s war crimes trial, the experience haunts her. The characters in the book reacted to horrible situations in understandably complex ways.

I found the second book fascinating, but less satisfying. The reactions of the characters (now living in Israel) did not have the ring of truth I felt in the first book. Anna and Chaim raise their children and thrive in Israel, yet her experiences during the war continue to haunt Anna and ultimately lead to the dissolution of the family.

When I told Leon of my reaction to the second book, he was surprised.

“I liked the second book more,” says Leon. “The amount of fortuitous and unexpected happenings in the second book were more interesting than the first. … The first and third books are, in their own way, self-contained stories. Each deals with two families and how they act and react to the incidents and times in which they live.

“However, the second book is a far wider experience, more characters, more interaction, more emotion, i.e., the death of Sholom’s wife and his remarriage; the discovery of Father Joseph and his conversion to Yossi; the colonel no longer being a Nazi officer but becoming a father figure; the Colonel’s daughter, Liese, developing a relationship with Father Joseph. … Ups and downs, disjointed, fortuitous happenings, but isn’t that what life is all about?”

There was one aspect of the second book on which Leon and I are in complete agreement – the ending left me feeling unsettled and unsatisfied. Leon agrees, saying he wrote the third book because, “I was unhappy with the way I ended the second book … I needed to resolve the unresolved issues.”

The third book reaches beyond the family and Israel to explore the lingering, far-reaching effects of the Holocaust. Survivors and their descendants continue to struggle with the horrors and nightmares. But the novel also shares the impact on relatives living in safe nations during the war who search for decades to learn the fate of their relatives who had remained in Poland.

The trilogy was well worth reading, and I enjoyed my discussions with Leon about the stories.