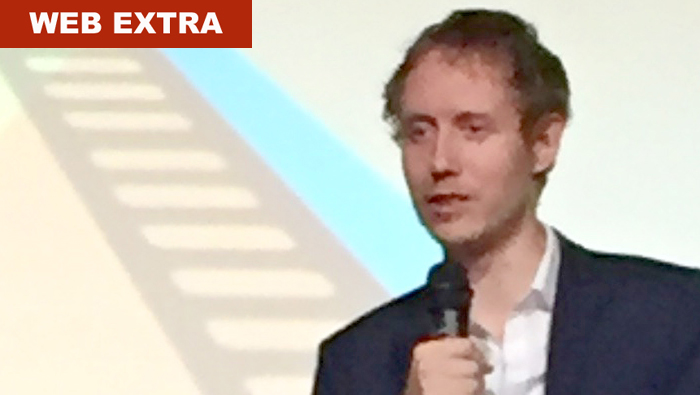 “Son of Saul,” directed by Laszlo Nemes, won a Golden Globe for 2016 Best Director of a Foreign Language film and has been nominated for an Oscar.

The film opens in Portland for a general run Jan. 29 at Cinema 21 after a members-only opening preview Jan. 20 at Northwest Film Center.

Nemes answered questions from the audience after the film screened at the Palm Springs Film Festival in January.

The film stars Geza Rohrig as Saul and is set in Auschwitz in 1944. Saul is a Sonderkommando, an inmate forced to work in the camp herding arrivals into showers and then dragging their bodies to the crematorium and cleaning up the remains.

Saul sees the body of a boy and becomes obsessed with giving his corpse a Jewish burial. No matter how many Holocaust films you have seen, you have never seen one like this. The cameras focus tightly on Saul. Eight languages require English subtitles.

I was fortunate to attend this year’s Palm Springs International Film Festival, where the film was screened. The audience knew this was going to be an intense film, but we also knew we could not miss it. We were taken by surprise when the 38-year-old Hungarian film director came on stage immediately following the film to answer questions. Nemes was soft-spoken and passionate – and the whole experience was riveting.

Following are the audience’s questions and the director’s answers. The interview has been edited for brevity and clarity.

Why did you do the film in this way?

This is not an easy film. I thank you for staying. After watching this film, it is not easy to listen to someone talk about this film. I understand that sometimes it can be useful. I had this feeling that the Holocaust had become a distraction over the past years. I wanted to give a sort of visceral interpretation of the human experience of the camp and the extermination machine. I think it is something that’s never really been approached or communicated in the so-called Holocaust films. I think the Holocaust films have established a code, a set of codes, that are actually reassuring the audiences instead of going to the heart of the incredible industrial machinery of extermination that was put in place not so long ago. I really wanted to not have this kind of historical approach, but to put the audience in the middle in the here and now.

Who distributed your film? And what type of research went into your film?

It was released by Sony Picture Classics and distributed in the United States. The release date was Dec. 18, and it’s going to be a gradual release nationwide.

I first read about the diaries of different members of the Sonderkommandos at Auschwitz 10 years ago. These texts offered incredible insight into the essence of the extermination machinery. These are people who knew they were going to die and witnessed the exterminations firsthand. They tried to leave a trace and put some of those writings into the ground around the crematorium of Auschwitz. Some of the texts were found. Not all of them. We think 90 percent of the texts have never been found. They are still there. Talking to us. That was the beginning of the film project. I wanted to anchor the film as much as possible into the facts that I read through these texts and through the information I had access to. But information is very limited when you approach the Sonderkommandos. It took a long time to research this film.

What was your reasoning behind your filming approach, using close-ups and leaving everything else in the periphery?

Actually, in cinema when you want to show too much and you have the strategy of frontal representation, I believe you actually diminish the moral scope or the significance of what you show. You make it understandable. The audience can encompass what they see. The imagination of the viewer is not working. I knew that I had to find away to make it a personal experience, and for that I had to narrow the scope. We wanted to make a portrait of one individual. One thing that makes sense, that you could represent, is the honesty in the human face. Everything else is in reference to that. There is one reference point. It is the human face and then the imagination to function, to recreate, to have the intuition of the suffering that is taking place in the background. It has to go through the viewer’s imagination. You can open the perspective this way. Otherwise, you only diminish it. That is why the very classical approach of revealing is actually very problematic, and it doesn’t capture the audience in a personal way.

Do you think Saul’s journey was a search for redemption? Or was this his son?

I am very reluctant to give a manual to the film. I think I really wanted to offer a personal experience. It had to be a simple story. The real question within the story is one that you, the viewer, has to answer: Is there in anyway a possibility when there is no more hope, no more religion, no more god and nothing human, is there still the possibility to remain human? And that is the question of the film. I am not saying that what the main character wants to accomplish has to make sense to everybody. But it is a question. If Saul in the film, and the other members around him, does not understand what he is trying to accomplish, but it still makes sense to him. We hope it makes sense to the viewer after awhile. I hope after watching the film it starts making sense.

Is this a personal story for you?

It is … especially when you are European. It is part of your history. It is definitely part of my genetic code. I carry the destruction of my family in my body. It’s just there. You have the continent at the height of civilization that turns to this kind of destruction of people. It raises questions about the direction of civilization. It still does, it is still our question, and I think if cinema doesn’t ask these kinds of questions, then what is the point of cinema? So I think I really wanted a personal view. My family … they either did not come back or they went into hiding. But nobody came back. So my story is that I always try to project myself, the individual experience of it.

What is Hungary’s reaction to your film, particularly with the current government?

It is paradoxical. You have Hungry – the only country that was willing to finance this film. And at the same time, obviously, Hungry is very anti-Semitic, I would say as is the rest of Europe, or the rest of the world. But in Hungry, you can feel it. I think they don’t really know how to react. The film did well. But let’s say a lot of people still ignore it or just try to consider it as the work of some foreign conspiracy. So that is problematic and paradoxical at the same time.

Can you talk about your main actor, Geza Rohrig, an Oscar nominee for his performance in the Best Foreign Language film category?

He hasn’t acted since the 1990s. He was supposed to become a film director. I knew him. He is a poet and a writer living in New York. He had an incredible life, and I think the whole question of the Holocaust always obsessed him. For that reason he understood this project from the very beginning. He understood that we wanted to go back to the middle of it without the postwar interpretation of the Holocaust. It was easy to communicate with him, and I think he is an ordinary man, but at the same time he is a very profound person. He has a real philosophy about all of this. It was very meaningful and intense to work with him.

Any comparison with what went on in your film and the action of Hungry today and the Syrian refugees?

There is a rise in extremism in the world today, and genocides are being carried out as we speak. In Syria, Iraq, I think the genocidal tendency in human nature is very present, and Auschwitz gave us a blueprint. Before that the Armenian Genocide took place. All part of the industrialization of the killing machine in a progressively technological world. It is a scary echo. The refugee problem is a European problem. It is a civil war with all the massacres, and the genocide going on and not being controlled spreads – and Europe is not prepared for it.

Comment on Saul and the relationship with the woman in the barracks.

I am reluctant to comment. We kind of like the fact that we cannot explain everything. This is the philosophy behind the film. You’re in the camps, and you have access to very little information and the way the story is told. You, the viewer, are in the middle of this. We wanted to have a sort of emotional link to someone who is still alive in the scene where the main character just says goodbye to the living world. We had a previous version that gave away a little more information of the relationship they had before, but we did not want that. It is a little mysterious.

Tell us about the soundtrack.

The sound was done mainly postproduction. Five months of postproduction for sound, which is quite an extensive period. We had eight languages in the film. We wanted to immerse the viewer in this reality. And the sound had to say that there is much more than the image. There is much more than you can see, the picture being very narrow. There is a constant reference to the infinite madness going on around. It is always evolving. It was a long process to design that.