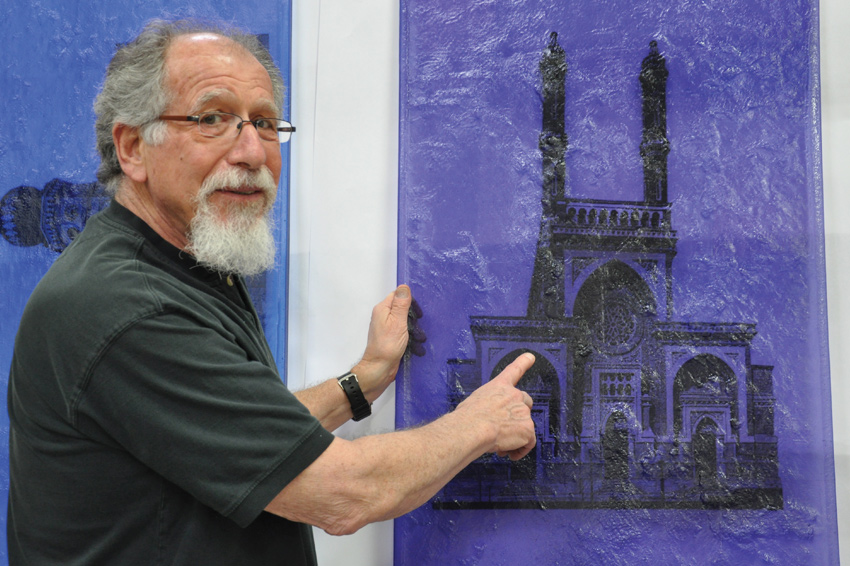 When two art collectors asked glass artist Steve Klein if he would be interested in creating the windows for their California congregation as it rebuilt its fire-damaged sanctuary, he realized two things. First, he didn’t want to just make windows, he wanted to create “something special that would have meaning to the building and to the congregation.” Second, he knew he needed help and resources.

Primarily a pedestal glass artist, Steve says he had no idea what he needed to know about windows. So he called on his friend Richard Parrish, a glass artist and former architect. The two have jointly taught workshops and residencies in casting and fusing glass at Bullseye Glass Resource Center, and knew Bullseye offered the facilities and support they would need for the project. Founded in Portland in 1974, Bullseye Glass Company is, according to its website (bullseyeglass.com), “a manufacturer of colored glass for art and architecture with worldwide distribution and a strong commitment to research, education and promoting glass art.”

Raised in a Reform congregation in Southern California, Steve now lives in La Conner, WA. Richard lives in Bozeman, MT. But the two are involved with Bullseye.

“They have the large-format kilns and the expertise we needed,” says Steve.

When the two artists met with the TBS’s building committee and Rabbi Heidi Cohen, the rabbi emphasized that education was an important role for the synagogue.

“We suggested windows that would blend in with the contemporary building, but would also tell a story and have a traditional content,” says Steve. The windows will be set in 18-inch-thick Jerusalem stone, so the artists decided to texture the sanctuary side of the glass to complement the stunning stone wall. “We proposed to present a brief history of Judaism through images of iconic and important synagogues. Our story would start with Herod’s Temple in 20 BCE.”

The two spent months researching historic synagogues for the remaining windows. In addition to Herod’s Temple, 13 synagogues are depicted, culminating in an image of the Plum Street Temple in Cincinnati built in 1865. Since TBS is a Reform congregation, Steve says it seemed fitting to finish with the Reform congregation where Rabbi Isaac Mayer Wise served for 53 years. Rabbi Wise was the first President of the Union of American Hebrew congregations and founded Hebrew Union College.

Since many of the synagogues predate photography, the two relied on descriptions, drawings and models to create the images. An expert with Photoshop, Richard would render the building image. Meanwhile, Steve created plates of glass in traditional jewel tones that were placed in the giant kilns lying on top of a fiber blanket torn and bunched to create a texture that mimicked the Jerusalem stone. Steve then silkscreened with glass powder onto the public gallery side of the window; finally the glass was kilned again to fuse the image to the window.

Steve says plaques with information about each of the synagogues will be displayed beside the windows, ensuring that the educational goal of the project is as successful as the aesthetic presentation.