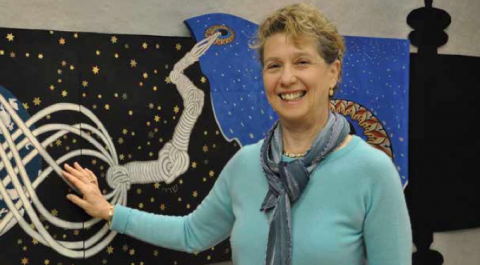 Sara created the exhibit “to be a visual entry point to Judaism.”The project presents 18 core concepts of Judaism through an artistic lens. A Judaic artist whose ceremonial and ritual artwork is used in synagogues and homes across Oregon and around the country, Sara knows the impact art can have on understanding and emotions.

“This project is something I am presenting to the Jewish world at large in the hope people will find it useful and inspirational and a way of connecting,” she says. “I want to bring people to a deeper understanding and engagement in Judaism.”

Sara’s personal Jewish journey began in her hometown of Detroit, where she began studying Hebrew for the first time at a Yiddish school afterschool program. While attending Camp Tamarack, a camp supported by Detroit’s Jewish Federation, Sara met Fred Harwin. The first time they met, Fred was a counselor and Sara a camper. But the summer before Sara went to the University of Michigan to study art, they connected again when they were both on the camp’s staff. That second connection sealed the deal.

Fred attended Wayne State University and the University of Michigan and became a medical illustrator. Sara earned a bachelor’s in fine art.

Soon after their marriage 46 years ago, the couple moved to Oregon when Fred was hired by Oregon Health & Science University. While on sabbatical
36 years ago, he learned to make facial and ocular prosthetics. He is now one of 150 board-certified ocularists in the United States, and he creates detailed, custom-made ocular prosthetics (artificial eyes).

The Harwins have two children. Lise, 36, is the public relations director at Lewis & Clark College. She attended the afterschool Hebrew program that was then part of Portland Jewish Academy. Jesse, 27, attended the PJA day school from kindergarten through eighth grade. He is currently a student at Portland Community College and works with the Mentor Network, helping emotionally delayed individuals.

In addition to art, Jewish camp and their two adult children, the Harwins share a commitment to the Jewish community.

“Our involvement in the Jewish community is with the intention of building a healthy and vibrant Jewish community for people, of whatever practice, to be part of – that is our guiding principle,” she says.

The couple has been involved with Gesher (a bridge of outreach and welcome to the unaffiliated) and the Egalitarian Shul. Sara is a past president of both PJA and the former Women’s Division of the Jewish Federation of Greater Portland. Her ritual artwork can be seen at several local congregations. Congregation Neveh Shalom has a set of six Torah mantles, Congregation Shaarie Torah has an ark curtain and table cover and Congregation Ahavath Achim has ark doors. Congregation Beth Israel also displays some of her art, though not ceremonial pieces.

“Fred has been on this journey with me all along the line,” says Sara. She says he has helped her understand “the power of the word to communicate the idea, yet realizing words are imperfect at best.”

After four decades of creating ritual and ceremonial art using acrylic painting, paper-cutting, mixed media, stained and etched glass, lithographs and fiber art, Sara says she decided, “It was time to do work I wanted to do for myself.” She drew on her past projects and embarked on an intensive study program, which she compares to pursuing a Ph.D.

The exhibit explores the intersection between that study and “my visual communication.”

During two years of intensive study of Hebrew with biblical studies professor Steve Carver at Warner Pacific, Sara focused on word development and how words grow out of common roots. She chose 18 roots – three letter groupings that are the root of key concepts from the Torah – “that were inspiring to me.”

While her new exhibit is based on those words, the real impact is through viewers’ visceral response to the images she has created.

“Sara … invites and empowers viewers to find their own vision, views, values and to add their own voices to the flow of the tradition,” says Rabbi Goldie Milgram, Reclaiming Judaism founder and executive director.

Created in partnership with Reclaiming Judaism, a nonprofit that gathers leading Jewish innovators to collaborate in the creation and provision of new programs and resources for meaningful Jewish living, the exhibit is planned as a traveling exhibition after its run at the OJM ends April 20.

OJM Director Judith Margles says, “I’ve been enthusiastically following the artistic development of Illuminated Letters for the past few years, always with an eye to bring it to OJM. We are particularly thrilled to be the first museum to exhibit this work and to further explore the tradition of the illuminated manuscripts.”

As part of the OJM exhibit, Margles says, “A smaller exhibit of four rare manuscripts, on loan from Mount Angel Abbey, John Wilson Special Collections, Multnomah County Library and the Mark O. Hatfield Library, Willamette University, will draw upon Sara’s exploration of the intersection between art and language.”

The illumination in the exhibit title reflects Sara’s view that “light allows us to see so much, and the energy partnered with the light draws us to the possibility of connecting with that.” She says, “My sewing is my ‘threads of connection.’”

“Sara Harwin’s exhibition is a visual guide to the 18 roots of Jewish spirituality and meaningful daily practice, mitzvah- centered living, that connects us to each other, the planet and a cosmic sense of the Divine,” says Rabbi Milgram. “Reclaiming Judaism through the lens of spirituality and meaning is central to the path of Jewish healing and meaningful living after the traumas of the 20th century. As an artist, Sara has created a valuable approach to empowering reconnection in ways that eschew an infantilizing theology and open up authentically Jewish portals of connection to the Divine.”

he exhibit features six panels arrayed along a black background representing a Torah scroll. After Sara selected the roots that spoke to her, she created “particles,” three- dimensional objects each containing the letters of three roots. She created a panel for each particle, in addition to an introductory and concluding panel.

According to Rabbi Milgram, Sara “has developed the exhibition in ways that help the viewers to experience this entryway to reclaiming Judaism for themselves. … This is an experience of active learning, which is itself a primary goal of a healthy Jewish life.”

“Illuminated Letters – Threads of Connection” is the first exhibit in which Reclaiming Judaism has served as a partner. The nonprofit’s teaching and editorial support of the exhibit is part of its Mitzvah-Centered Life Initiative.

Currently Sara is on the staff and faculty of Reclaiming Judaism.

“As a mentor to Sara’s learning, spiritual development and exhibition process, I am deeply moved by the depth of Jewish scholarship and professional artistry that she has undertaken in relationship to each letter, term and phrase,” says Rabbi Milgram, who plans to come to Portland for the opening reception Feb. 5.

It was while studying with a wide range of people at Jewish conferences that Sara realized she wanted to understand how her Jewish studies intersect her visual communication.

Her studies at a Jewish Renewal conference with Arthur Kurzweil, author of Talmud for Dummies, inspired one portion of the Illuminated Letters exhibit.

“Where are the voices of women on the page?” she wondered. “If there were to be a contemporary Talmud raising questions, who would be the thoughtful individuals we would turn to to put their words on the page?’”

So in conjunction with each of the root concepts on the exhibit panels, Sara has invited noted Jewish thinkers and scholars to reflect on those words. The OJM exhibit will include one page arranged like a page of the Talmud with five modern- day thinkers reflecting on the concept of shavat, holy rest – the rest that occurs after the six days of creation. Other Talmud pages will be added for future showings of the traveling exhibit.

“The idea is that men and women scholars of today from all branches of Judaism are on the same page talking about their personal experiences that flow from that root in a way that is respectful and inclusive,” says Sara. “The writings we are getting are very touching and very personal.”