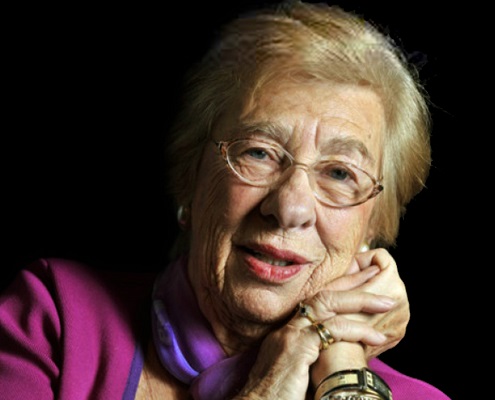 Oregonians have two opportunities (see below) to enter the world of Anne Frank as told by her stepsister and childhood friend Eva Schloss.

“The vision is to create a moment for our community when nearly 1,000 participants gather in the Newmark Theatre to hear, see and come as close to this important story as we will ever be able to,” says Rabbi Motti Wilhelm of Chabad of Oregon.

The programs are presented by the Chabad Center for Jewish Life in partnership with Oregon Jewish Museum and Center for Holocaust Education, Portland State University’s Harold Schnitzer Family Program in Judaic Studies and the Jewish Student Union at Willamette University.

“Oregon Jewish Museum and Center for Holocaust Education is dedicated to sustaining the memory of the Holocaust,” says OJMCHE Executive Director Judy Margles.” Listening to the living memories of survivors is critical to our mission. As we arrive at the 73rd year since Anne Frank’s death in Bergen-Belsen, we are fortunate for the opportunity to hear from a survivor who has a direct connection to Anne and her family.”

When Germany annexed Austria in 1938, many Jewish families fled Austria to avoid persecution. Among the emigrants was 8-year-old Eva Geiringer, who with her mother, brother and father moved to Belgium and then to Holland, where one of her neighbors was a German Jewish girl of the same age.

The two girls became friends and playmates (though, as Eva would say many years later, the girl was “much more grown up and mature than me”). They passed the time by skipping, playing hopscotch and marbles, and drinking lemonade.

Ultimately, both girls and their families were deported to the Auschwitz concentration camp. Later they would become stepsisters.

Eva survived her concentration camp experience and made her way to England, where she married Zvi Schloss and raised three daughters. She worked as a studio photographer and ran an antique shop.

Her stepsister did not survive Auschwitz, but kept a diary that did. Her name was Anne Frank.

Since 1985, Eva Schloss has devoted herself to Holocaust education and global peace. She has recounted her wartime experiences in more than 1,000 speaking engagements. She has written two books and has had a play written about her life. In 1999 Eva signed the Anne Frank Peace Declaration along with United Nations Secretary General Kofi Annan and the niece of Raul Wallenberg, a legendary figure who rescued thousands of Jews in Budapest.

Eva joins many courageous individuals who work tirelessly to end the violence and bigotry that continue to plague our world. Eva’s insightful message reminds us that life is precious and fragile, that the creative spirit is stronger than fear, that the power of good is immeasurable and that love makes a difference.

“Today’s students will be the last to personally encounter and ask questions of a Holocaust survivor, let alone one as prominent as Anne Frank’s sister,” says Rabbi Motti Wilhelm. “In that spirit, the event committee has committed to finding a sponsor to enable us to discount group tickets for students for up to 100 students at $15 a ticket.”

To bring a student group at this special rate, contact StephanieViegasDias@portland5.com.

Tickets: $25 with sponsorships available; 600 tickets are available at no cost to Willamette University students