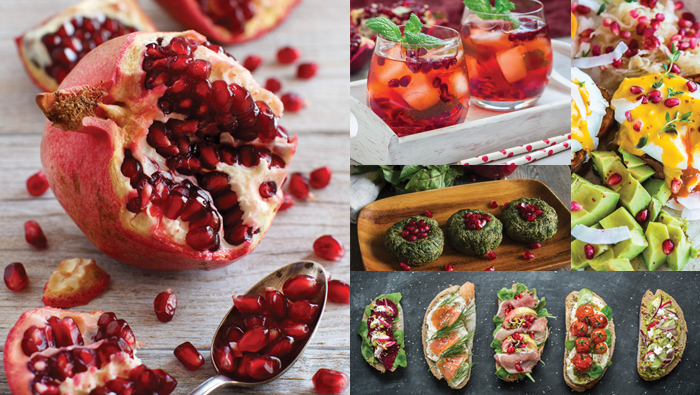 The reasons are nearly as numerous as the plentiful seeds of the fruit.

On Rosh Hashanah, we wish that our good deeds in the ensuing year will be as plentiful as the seeds of the pomegranate. The fruit is said to contain 613 seeds, corresponding to the 613 mitzvot.

The pomegranate also is a nice fit for the Shehechiyanu blessing (celebrating new and unusual experiences). It is a “first fruit” in at least two contexts. People often taste a pomegranate for the first time in a holiday dish. Pomegranates are believed to have been one of the first cultivated fruits with archaeological excavations providing evidence it was cultivated during the Bronze Age (3500-2000 BCE).

The Land of Israel is praised for the pomegranates that grow there: “A land of wheat and barley, of vines, figs and pomegranates, a land of olives and honey.” (Deuteronomy 8:8).

And of course, as you can see from the photographs on these pages, a pomegranate adds a splash of color and burst of flavor to any dish it graces.