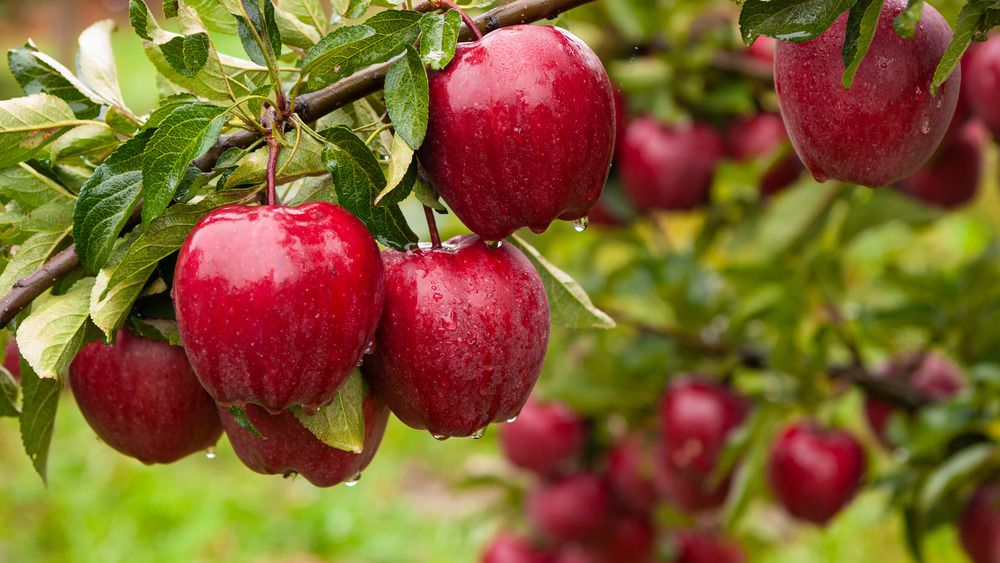 What comes to mind when you think of the “forbidden fruit” described in the Garden of Eden – the one that Eve is said to have eaten and then shared with Adam? If you guessed an apple, you’re probably wrong.

In the Talmud, when listing the possible “fruits” that may have been products of the Tree of Knowledge in the Garden of Eden, there is no mention of apples in that list. Instead, the “fruits” mentioned are wheat, figs and grapes.

Given all of these potential forbidden fruits, how did apples – which aren’t even from the Middle East – become the predominant interpretation?

It could all be because of a misunderstanding in translation. The Latin word for an apple is mālum (borrowed from the Greek), and the Latin word for evil is mălum – both are commonly written (without their diacritical marks) as “malum.” This confusion could be the reason why many assumed the forbidden fruit to be an apple.

It’s a relief to know that the fruit of temptation is not an apple. It would be hard to rationalize that the fruit that defines human weakness and its downfall would be the same one we dip in honey at Rosh Hashanah to symbolize the hope for a sweet year ahead.

But why the apple? Isn’t dipping the challah in the honey enough to ensure a sweet New Year?

In Bereshit, the book of Genesis, Isaac compares the fragrance of his son, Jacob, to “sadeh shel tappuchim,” a field of apple trees, and in “Song of Songs,” we read, “As the apple is rare and unique among the trees of the forest, so is my beloved (Israel) amongst the maidens (nations) of the world.” When Solomon depicts the love God harbors for His nation, he writes, “Beneath the apple tree I aroused you[r love].” Perhaps eating an apple on Rosh Hashanah is an attempt to remind God of our love.

According to Jewish mysticism, or Kabbalah, the apple represents the Shekhinah (the feminine aspect of God). During Rosh Hashanah, some Jews believe the Shekhinah is watching us and evaluating our behavior during the previous year. Thus eating apples dipped in honey represents our hope that the Shekhinah will judge us kindly and favor us with sweetness.

Beyond its association with the Shekhinah, ancient Jews thought apples had healing properties. Rabbi Alfred J. Kolatch writes in The Second Jewish Book of Why that whenever King Herod felt faint, he would eat an apple; and that during Talmudic times apples were frequently sent as gifts to people in ill health. Scholars tell us that mystical powers were attributed to the apple, and people believed it provided good health and personal well-being.

There may be something to this theory and the adage, “An apple a day keeps the doctor away.” Apples are rich in fiber, vitamins, minerals and an array of antioxidants. The fruit contains pectin, quercetin, procyanidins, and vitamin C, which are all beneficial in preventing disease and cancer. In addition, apple juice, apple flesh, and apple cider vinegar all have a high malic acid content. This compound helps treat conditions such as fibromyalgia, chronic fatigue syndrome and gallstones. Perhaps that’s why they have been part of our diet for so long – archaeologists have found evidence that people have been eating apples since 6,500 B.C.

Although the traditional apple used during Rosh Hashanah is a sweet variety like Fuji or Red Delicious, at last count, more than 7,500 apple varieties have been identified worldwide. Over 2,500 varieties are grown in the United States – 100 of which are grown for commercial sale and picked mainly by hand when harvested. The United States, China, Poland, Italy and Turkey are the countries that lead the world in apple production.

When you sit down to enjoy your apples dipped in honey in celebration of a sweet New Year, take a moment to appreciate the humble apple and how it came to be such a significant part of our Rosh Hashanah tradition.