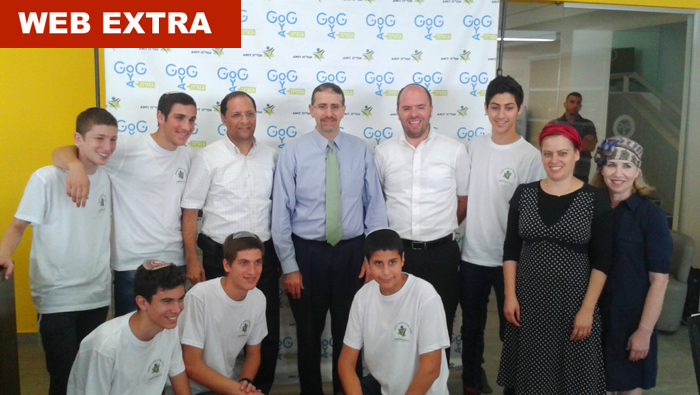 RA’ANANA, Israel – U.S. Ambassador to Israel Dan Shapiro visited AMIT’s state-of-the-art Gogya Education Innovation Center recently to see the latest innovations in the way that education and training are being taught to more than 32,000 students throughout the country.

AMIT is Israel’s premier education network. Their success at enabling students, from various socio-economic backgrounds, to reach their fullest potential and become productive members of society with the skills necessary to build a successful future, has received international acclaim. The Ambassador’s visit centered around his interest to learn more about the AMIT network and its state-of-the-art Gogya facility in order to learn more about AMIT’s education model and to strengthen partnerships.

Shapiro toured the state-of-the-art facility, Israel’s first modern school of the future, featuring futuristic educational architecture, mobile furnishings, including modular chairs and tables, glass-walled classrooms and multimedia screens. Gogya represents a new way of education in Israel. The ambassador had the opportunity to meet with AMIT educators and students to hear about the innovative and collaborative learning taking place.

He met with girls from the AMIT Renanim’s robotics track as well as students from AMIT Amichai who participated in a workshop with the ambassador, and shared with him a model satellite that they built in cooperation with Elbit. Lastly, he met with students from AMIT Menorat HaMaor Haredi track who are the recipients of an embassy-sponsored English program.

“The warm, informal relationships between students and teachers, something so unique to Israel, is something I would like to see adopted in our educational system in the United States,” said Ambassador Shapiro.

“AMIT’s Gogya Center has received national recognition of being a center of excellence and we are proud of the great work our teachers and administrators are doing in building the future of Israel one child at a time,” said AMIT Director General Amnon Eldar. “We’re excited about the opportunity to share our model with education systems in other countries, including  the U.S.”

Founded in 1925, AMIT is the premier education network in Israel, serving more than 32,000 students each year in its 110 schools in 29 cities throughout Israel. AMIT enables students to reach their fullest potential and become productive members of Israeli society with the skills necessary to build a successful future.