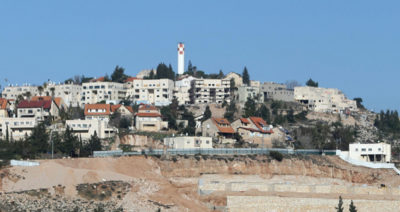 Pictured above: Shiloh, in Samaria, is one of the locations Airbnb had removed from their listings.

Airbnb announced today (Dec. 17) that it has suspended the implementation of its prior decision to remove listings in Jewish settlements in the West Bank, after sending a senior delegation to Israel to negotiate with Tourism Minister Yariv Levin.

“Our policy will not be implemented,” Airbnb said in a statement following the meeting in Jerusalem. “Airbnb expressed its unequivocal rejection of the BDS movement and communicated its commitment to develop its business in Israel, enabling more tourists from around the world to enjoy the wonders of the country and its people.”

The statement continues, “We are here to meet with a variety of stakeholders and as a result of our meetings have an even deeper understanding that this is an incredibly complex and emotional issue.

“Airbnb communicated that we are developing the tools needed to implement our policy and that process includes continuing our dialogue with the government of Israel and other stakeholders,” the company stated.

Airbnb issued a press release on Nov. 19, titled “Listings in Disputed Regions” that had stated their decision to remove listings from their rental platform of approximately 200 listings in Israeli settlements in the West Bank.

An excerpt of how they arrived at this decision states, “As a global platform operating in 191 countries and regions and more than 81,000 cities, we must consider the impact we have and act responsibly. Accordingly, we have developed a framework for evaluating how we should treat listings in occupied territories. When evaluating these types of situations, we will:

When we applied our decision-making framework, we concluded that we should remove listings in Israeli settlements in the occupied West Bank that are at the core of the dispute between Israelis and Palestinians.”

A number of Israeli ministers including Justice Minister Ayelet Shaked, Tourism Minister Yariv Levin and Public Security Minister Gilad Erdan have called on property owners affected by the decision to take legal action and some of these owners have begun to file petitions in Jerusalem District Court against Airbnb’s decision.

Since Airbnb released their statement, many have come forward in support of anti-BDS actions.

In a New York Times article on Nov. 19,  Eugene Kontorovich, director of international law at the conservative, Jerusalem-based Kohelet Policy Forum and a professor at George Mason University, stated, “This is not about disputed territories, as Airbnb has listings in Moroccan-occupied Western Sahara, Turkish-occupied Cyprus, and more,” he says “So it is only Jewish properties in the Jewish homeland that are banned. Airbnb’s approach of singling out Jews from all the disputes in the world will put it at odds with U.S. state B.D.S. laws and principles of discrimination.”

One community even passed a resolution to boycott Airbnb.

The Beverly Hills City Council unanimously passed a resolution on Nov. 21 condemning Airbnb’s decision to remove listings of rentals in Israeli settlements in the West Bank and is encouraging a boycott of the web service.

“We find the actions of Airbnb deplorable,” says Mayor Julian Gold. “On behalf of our residents, this unanimous resolution reflects the City Council’s ongoing commitment to Israel and to exposing hatred anywhere it exists.” The Israeli-Jewish Congress and human rights leaders have also publicly opposed the company’s actions.

“Airbnb is not welcome in Beverly Hills as long as its policies are based on anti-Jewish double standards,” adds Vice Mayor John Mirisch. “Jew hatred is a disease. We can try to inoculate others against this malady but we also must protect ourselves against its effects.”

Jake Bennett current chair of the Israel Engagement Committee of the Jewish Federation of Greater Phoenix (Arizona)  sent the letter below to Airbnb’s CEO Brian Chesky:

I am the former Arizona Regional Director of the Anti Defamation League, and current Chair of the Jewish Federation of Greater Phoenix’ Israel Engagement Committee. I am also a dual citizen with Israel and a frequent visitor to Judea and Samaria (“the West Bank”).

Help me understand why Airbnb is siding with a movement whose main goal is ethnic cleansing of the Jewish People and which does not believe in coexistence? I am writing you because you might not know that Airbnb is being coopted into a campaign to ethnically cleanse Jews from Jerusalem and the West Bank. That’s what BDS’ first stage aim is.

Your boycott of Jewish listings in Judea and Samaria is one-sided: it does not delist Arab owners’ listings or Arab towns in what is supposedly “disputed territory.” It boycotts only Jews and Jewish towns.

Below is a brief statement of history and context that I hope you will take a moment to read, so that you will understand the perspective of both sides of this conflict.*

I am also including below an exchange between a friend of mine and Airbnb Customer Service, so you can see the practical effects of your new policy. You might find it shocking.**

I am available to discuss further by phone or in person and would welcome the opportunity.

On the opposing side, in favor of Airbnb’s decision, the US Campaign for Palestinian Rights tweeted on Nov. 19, “Another BDS WIN!!! @Airbnb says it will remove all listings in Israeli settlements built on stolen Palestinian land, following a joint BDS campaign by USCPR, AMP, CODEPINK, FOSNA, JVP, SumOfUs, and USCPN. People power works!”

American Muslims for Palestine also tweeted on Nov. 19, “This is huge! AMP is proud to have participated in the coalition Stolenhomes.org to push for this. #bds.”

*Jordan kicked all the Jews out of Jerusalem, Hebron and Judea and Samaria when they illegally occupied that territory in 1949. They then started calling it “the West Bank.” All the synagogues in Jerusalem were destroyed. All the Jews expelled. That’s what BDS wants to get back to. When BDS complains about Jewish communities being built in “East Jerusalem,” many people think this refers to an “Arab area” that Jews have no right to build in or live in. In truth, Jews have lived there for 4,000 years and they don’t want to be kicked out. I don’t know if you are aware, but “East Jerusalem” includes the Old City of Jerusalem which was the site of the First and Second Temple, which is very important to the Jewish People and to others.

Jews were only able to come back to Jerusalem and Hebron when Israel liberated the territory from Jordanian oppression in 1967.

BDS is just a new approach to ethnic cleansing.

Did you know that Jews lived in the 22 countries of the Arab League for centuries up until 70 years ago? After Israel’s independence in 1948, 1 million Jews were ethnically cleansed from 5 million square miles, across those 22 countries. Today there are 400 million Arabs living in those countries and less than 5,000 Jews. What those countries did to their Jews, Jordan did to it’s Jews in territory conquered ’49. BDS is trying to reinstate that policy and outcome through international public and economic pressure today. Sadly, Airbnb has just joined that effort. It is not too late to reverse course.

As for Judea and Samaria, as I said, I am a frequent visitor. I like to visit my friends there and the Jewish historical sites, including the building built by King Herod over the Tomb of the Patriarchs and Matriarchs in Hebron. (It was built contemporaneously with the Temple in Jerusalem 2000 years ago as a parallel structure, honoring the roots of the Jewish tradition, the Patriarchs, and the fruits of the tree, the Temple. That’s why it looks just like the Western Wall in Jerusalem.)

**”Nov. 20, 2018 (excerpted from conversation with Airbnb customer service)
Joel
7:34 am
I am planning travel to Israel and the territories and am trying to look at options to stay in Kiryat Arba near Hebron or Shiloh south of Nablus. I’m having trouble finding a place and I hear you changed your policies. I want to visit holy sites in the territories like the tomb of the Patriarchs and the temple site at Shiloh. I cannot stay in Palestinian areas where you do have listings because those areas are dangerous for Americans/Jews and when I was last there had posted signs barring Jewish entry. Can you help me find a listing that will be safe and near those holy sites?”

[They were only willing to place him in the Arab part of Hebron, which has been a hotbed of terrorist attacks and anti-American activism…]