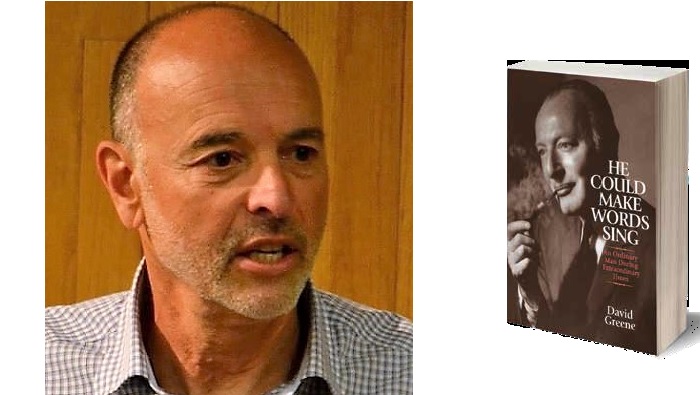 A high school teacher for 38 years, David Greene taught kids that history is a series of slices of time lived by people – not just a series of dates, events and leaders.

As the author of He Could Make Words Sing, he shares the stories of his father-in-law, Harry Greissman, and his journey through a tumultuous century. The son of Jewish immigrants, Harry went to college during the Depression, was wounded during the Battle of the Bulge, translated Nazi documents and then succeeded against the odds in the anti-Semitic advertising industry.

“My grandson was born in 2017, during quite extraordinary times, and 100 years after his late great-grandfather, about whom this book was written,” explains David. “The question arises: How can we prepare my grandson’s generation to deal with their century from how Harry Greissman and his ‘Greatest Generation’ lived through their extraordinary century?”

In the following excerpt from the book’s last chapter, David tries to answer that question:

Relax. We are just ordinary people living in our own ordinary times. As my friend Harris sarcastically says, “We all think our times are the most extraordinary evvvvverrrr.” However bad things might seem as we read this today, they are really rather ordinary historically. Our times do not compare with the extraordinary times Harry Greissman’s generation faced.

Yes, we face economic inequality and loss of jobs, but the unemployment rate is under 5%, not hovering at 25% as it did in the Great Depression. Yes, we face racial issues and de facto segregation, but de jure segregation is pretty much gone. If it existed then, Black Lives Matter would have had a far more difficult task, when lynching was rampant and whole neighborhoods were burned down by whites. Watch the new movie, “Mudbound,” as a reminder of black lives in the south in the 1940s to see how much they mattered.

Broken health-care system? Then, there was none to break. Medicare and Medicaid were mid-1960s inventions. The environment? Coal-fired furnaces were everywhere. Whole cities were covered in clouds of grey smoke and soot. Choose a domestic problem, any problem, and it was worse when they grew up. What rights did women have then? For the first fifth of the 20th century, they couldn’t even vote. I know that Tom Brokaw’s “Greatest Generation” had it far worse than my privileged Boomer generation, Generation X or today’s Millennials.

Of course, today’s new stories and cable shouting matches called newscasts scare the living shit out of many of us. We are still stuck in the longest war in our history and face terrorist threats daily. North Korea is not exactly the same nuclear threat the Russians were, especially during the Cuban Missile Crisis of 1962. We sat at the edge of our chairs watching Kennedy square off with Khrushchev.

Refugees refused? Border walls? How about turning away victims of the Holocaust?

Relax. This is not to disparage those in duress today. God know our world faces too many serious man-made problems. We have Trump and his reality-TV version of the world that is becoming all too scarily real. Environmentally, like the Wicked Witch of the West, the world is mellllllting!!! The immediacy and verbal violence in social media, divisiveness and fear mongering stress us to no end.

Relax. There is a monologue in Steven Levenson’s play, “If I Forget,” spoken by the patriarch of the family, Lou Fischer. In it, he describes the horrors of being one of the American soldiers who liberated Dachau. After a long sigh, he says, as I believe many of his generation would have said, “For you, history is an abstraction, but for us, the ones who survived this century, this long, long, century, there are no abstractions anymore.”