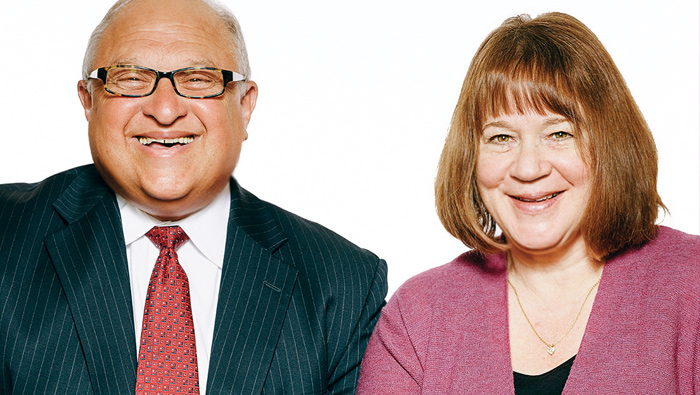 When Steve Kantor was the president of Jewish Family & Child Service nearly three decades ago, he realized all the local Jewish agencies were competing against each other for charitable gifts.

As a CPA and attorney specializing in estate planning, charitable planning and trusts, in addition to business law, Kantor believed there was a better way.

Soon he and Bob Glasgow drafted bylaws and articles of organization for the Oregon Jewish Community Foundation, designed to “create, promote and facilitate a culture of giving and to serve as a guardian of permanent funds available to safeguard the quality of Jewish communal life in Oregon and Southwest Washington.”

When OJCF was founded in 1989, Steve says cofounders hoped to get to $10 million under management by the year 2000. The foundation has far exceeded expectations. As of Feb. 29, 2016, OJCF’s total assets under management were $81 million.

Steve and his wife, Elaine, are part of that growth. The family established a donor-advised fund at OJCF early in the foundation’s history.

“We want it to keep growing,” says Steve. “We hope it gets big enough so our annual gifts (to charitable organizations) can be perpetuated after we are gone. … We are not big-name donors, but we try as hard as we can to build (the fund) so our kids and their husbands can administer our gifts to certain agencies we want to support.”

Yet despite his professional and the couple’s personal commitment to legacy giving, Steve says he was surprised when OJCF Executive Director Julie Diamond called and said the foundation wanted to name the couple this year’s Legacy Society honorees.

But she was not dissuaded.

“Steve and Elaine exemplify our shared values of leadership, generosity and social justice,” says Julie. “Steve is a past president of OJCF and played a vital role in establishing the foundation in its early days. We are thrilled to honor Steve and Elaine’s dedication to Jewish life, family and community.”

A Portland native, Steve attributes some of his understanding about the importance of family to the early death of his parents. “My father died when I was 16 and my mother died in 1983,” he says. “My sisters and I have been orphans a long time.”

In addition to being close to his sisters and their families (the siblings’ families go on cruises together every couple years), he and Elaine focus on spending time with their daughters, Ali Kestel, 38, and Lindsay Krivosha, 34, their sons-in-law and their grandsons.

As a senior partner at Samuels Yoelin Kantor LLP, Steve and his partners focus on estates and trusts and serve as a family consiglieri (advisor).

“I have families for whom I am representing the fourth generation,” he says, noting he helps families “look out over the horizon to achieve their long-term goals.” He also helps with succession planning for family businesses and investments.

One day last month, Steve and Elaine were helping cook dinner for families staying at the Ronald McDonald House at Legacy Hospital. When they asked a mother holding an infant why she was there, she said her son had been born with his intestines outside his body and was successfully treated at Legacy. It’s just one of many stories that have inspired the couple to give.

In addition to the family fund at OJCF, Steve also paid off a life insurance policy that will benefit JFCS when he dies.

“It’s a great way to make testamentary gifts when you are young for a relatively minimal amount,” says Steve.

“I feel I should practice what I preach to my clients.”

“I seldom meet with clients without talking about estate planning,” says Steve. He says he is no longer intimidated telling people that “Their kids will be comfortable, there are people in need and you can help.”

It is perhaps that attitude that makes Steve and Elaine well-deserving Legacy Society honorees.