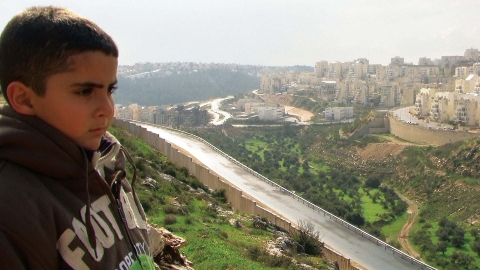 Co-produced by Israeli Guy Davidi and Palestinian Emad Burnat, 5 Broken Cameras was well received at Sundance Film Festival last month and was the recipient of the World Cinema Directing Award. This month it screens at the Portland Jewish Film Festivaal.

Shot from a one-man perspective, 5 Broken Cameras is a refreshing change from other Israeli documentaries that focus primarily on politics. Burnat, who begins the documentary by explaining that he purchased a video camera to film his son after his birth in 2005, ends up filming his village’s non-violent response to Israeli settlement building and construction of the security fence. Over the course of the film, Burnat films with six cameras; five of which are destroyed. Each camera has a unique chapter in the film.

Armed with his video camera, Burnat documents the changing landscape of his village and surrounding area as the security fence is built, settlements spring up and religious Jews move into complexes that tower over Palestinian villages in disputed territory.

A farmer in the small West Bank village of Bil’in, Burnat has a way of constantly paralleling good and bad throughout the film. Alongside Israeli Army raids, Burnat includes footage of his son, Gibreel, and his patient wife. He captures the innocence of childhood with laughter, first words and intimate family moments that illustrate how life continues even in challenging times.

As the documentary progresses, we witness Gibreel grow from a baby to a sensitive boy. The physical separation between the West Bank and Israel is expressed through the eyes of a child. The dichotomy of young boys dressed in peyes and tzitzit playing in beautiful apartments in the settlements peering down on Palestinian children in semi-permanent Palestinian shacks is a disturbing image that sticks with you throughout the film. Men dressed in suits and black hats throw punches while Burnat films. Even as a Zionist, it is hard to walk away without feeling a sense of frustration and unfairness toward Israeli settlers.

However, while the film focuses on the peaceful demonstration and a nonviolent approach to Palestinian protest, 5 Broken Cameras was light on any explanation as to why Israeli soldiers entered the village of Bil’in and why grenades and tear gas were thrown and houses searched. It is hard to imagine they entered without reason, and offering this information would have strengthened the film tremendously. Offering more Israeli accounts would have explained Israeli army reasoning to the audience.

Incorporating Israelis who worked alongside Palestinians was a powerful picture, channeling Burnat and Davidi’s quest for peace. Many viewers at Sundance said this was one of the most powerful documentaries they had seen.

“It takes strength to turn something negative into something positive,” says Burnat.

Abra Cohen is a freelance writer in Eugene who attended this year’s Sundance Film Festival.