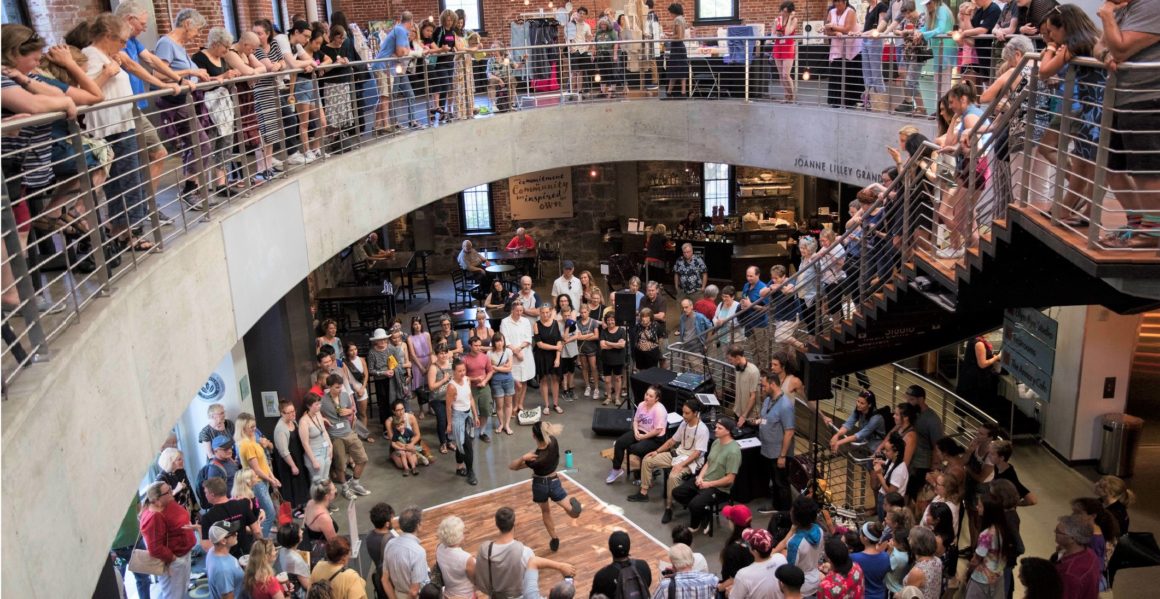 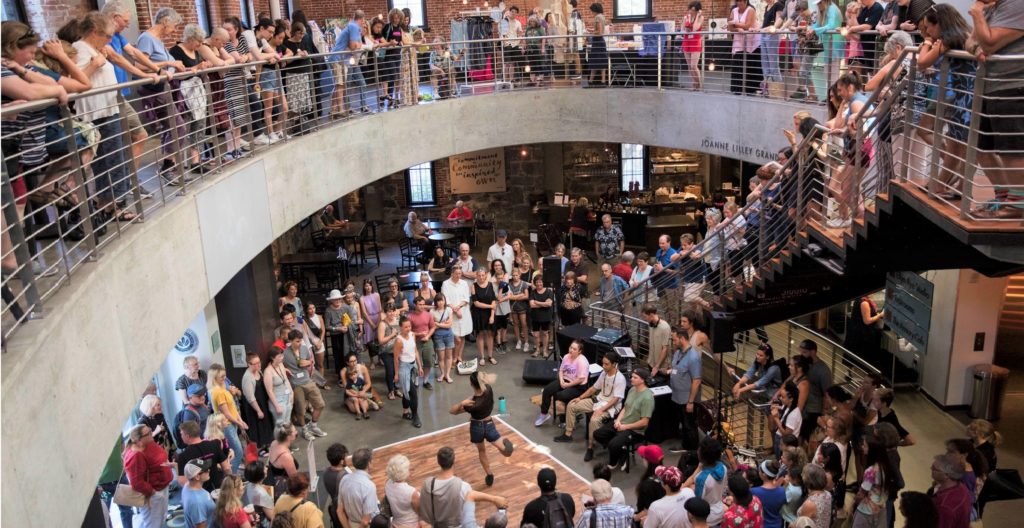 This summer, the 21st Annual JAW: A Playwrights Festival brings three new plays to The Armory for two weeks of script workshopping that will culminate in the JAW Big Weekend, where public staged readings of the scripts will be presented along with performances from local artists and classes. This year’s plays are Otto Frank by Roger Guenveur Smith, What Are You Worth? by Kara Lee Korthron, and an adaptation of Howards End by Caroline Hewitt.

Otto Frank explores the life of the father of diarist Anne Frank, examining our present through the lens of our not-so-distant past. What Are You Worth? follows a group of friends/lovers/slaves/slavers as they grapple with the meaning of human value through 800 years of people owning other people. Hewitt’s adaptation of E.M. Forster’s Howards End will receive its world premiere production in April 2020 as part of the first season Artistic Director Marissa Wolf has planned for Portland Center Stage at The Armory.

“The JAW Festival, with its reputation for bold, brave new work, is one of the wellsprings for innovation that drew me to this incredible company,” says Wolf. “I’m thrilled to launch these breathtaking new plays in the 2019 festival. Come for the readings, stay for the sweet treats and conversation!”

This year’s JAW will also introduce the Portland Playwright Slam, where attendees will be invited to contribute a 1-3 page script that will be read out loud by actors chosen from the audience. The Playwright Slam will take place Sunday, July 28, at 5 pm, and will be the final event of the JAW Big Weekend.

The JAW Big Weekend is July 26-28. FREE public readings of scripts in development will be presented Saturday at 4 pm and 8 pm, and Sunday at 2 pm. The JAW kickoff event will be held at 8 pm on Friday, July 26, featuring the work of this year’s Promising Playwrights. Surrounding the staged readings is JAW’s Press Play series, offering a slew of events and performances from local artists, and JAW’s Community Artist Labs, providing a chance to dig deeper with members of the JAW company. As always, JAW is free and open to the public. For more information visit www.pcs.org/jaw.

This year’s Press Play series includes a pop-up runway show and photo exhibit from inclusive fashion crew Fringe; a performance from jazz and neo-soul band Adebisi; the JAW Maker’s Fair, where attendees can shop local, handmade products; a special “For The Community (FTC)” showcase of street, club, and urban dance styles from members of House of ADA, Deadlyz, and New Birth; and a dance party with Heartbeat Silent Disco. Scheduling and additional information is available at www.pcs.org/events. This year’s classes are Goodbye Writer’s Block with Kara Lee Corthron; Performing Multiple Characters with Caroline Hewitt; and Speak/Sing! with Matthew B. Zrebski. Attendance for each lab is limited and determined by lottery. To enter the lottery, those interested should email education@pcs.org with their preferred lab choice(s).

Roger Guenveur Smith has been inspired by Otto Frank, father of diarist Anne Frank, to create a solo performance informed by both tragedy and triumph. As a steward of his daughter’s legacy, Frank navigated loss, adolescent ambition, and the criticism of those who questioned his motivations, the authenticity of the diary, and even the Holocaust itself. How does one simultaneously serve the living and the dead, and at what cost? Smith interrogates our present moment through a rigorous examination of our not-so-distant past.

ROGER GUENVEUR SMITH adapted his Obie Award-winning solo show A Huey P. Newton Story into a Peabody Award-wining telefilm, and his Bessie Award-winning Rodney King is currently streaming on Netflix. For the 2018 Douglass Bicentennial, Smith toured his signature show Frederick Douglass Now. This season, he created and performed Portrait of Charles White for the White Centennial Retrospective at the Los Angeles County Museum of Art. Also among his history-infused performances for the stage are studies of iconoclast artists Jean-Michel Basquiat and Simon Rodia, baseball greats Juan Marichal and John Roseboro, Christopher Columbus and Bob Marley, as well as intimate travelogues of Iceland and Philadelphia. With New Orleans native Mark Broyard, he created and continues to play the acclaimed Inside the Creole Mafia. Roger studied at Yale University and Occidental College, and has taught at both institutions, as well as CalArts, where he directs his Performing History Workshop.

WHAT ARE YOU WORTH?

Value. A definition: the regard that something is held to deserve; the importance, worth, or usefulness of something. Have you ever thought about your value? Follow a ragtag group of friends/lovers/slaves/slavers as they grapple with the meaning of human value through 800 years of people owning other people.

KARA LEE CORTHRON is a playwright, author, and TV writer based in Los Angeles. Her plays include AliceGraceAnon (New Georges, New York); Holly Down in Heaven (Forum Theatre, Washington, D.C.); Listen for the Light (Know Theatre of Cincinnati); and Welcome to Fear City (CATF, Shepherdstown, WV, and Kansas City Repertory Theatre). She is the author of the young adult novel The Truth of Right Now and the forthcoming Daughters of Jubilation (both from Simon & Schuster) and she currently writes for the Netflix show YOU. Her awards include the 2019 Otis Guernsey New Voices in Playwriting Award, Parents’ Choice Gold Award, Vineyard Theatre’s Paula Vogel Award, Princess Grace Award, Helen Merrill Award, and residencies at MacDowell, Camargo (France), Bogliasco Foundation (Italy), Skri∂uklaustur (Iceland), Hawthornden (Scotland), Djerassi, and the Millay Colony. She is a proud member of New Dramatists. (Photo: Jody Christopherson)

Based on the novel by E.M. Forster

Margaret and Helen Schlegel are savvy, intellectual women struggling to be heard over the stubborn dominance of England’s early 20th century social strictures. When their lives intersect with two very different men, the sisters’ relationship to each other, themselves, and the way they see the world, changes forever. Four actors play 20 characters learning how to connect with each other in a landscape of changing values and alliances. Howards End will have its world premiere next spring as part of our 2019-2020 season.

CAROLINE HEWITT is an actress, adaptor, and translator. She has appeared on Broadway twice, in Junk and The Front Page, and has worked extensively Off-Broadway and regionally. Recent television work includes recurring roles on The I-Land and When They See Us, as well as roles on New Amsterdam and The Black List. Caroline’s adaptation of Howards End was part of the What’s Next Fest at The Theater at Monmouth in 2018. She has an M.F.A. in acting from American Conservatory Theater, and a B.A. in French from Vassar College. She is currently adapting The House of Mirth into a play for five actors.

ABOUT JAW: A PLAYWRIGHTS FESTIVAL

Since launching in 1999, JAW: A Playwrights Festival has created a space for playwrights to have complete creative control and the resources to work on whatever they want to develop in their scripts. To date, 84 scripts have been developed at JAW, 19 JAW plays have received fully staged productions at Portland Center Stage at The Armory, giving Portland a strong national reputation for not only incubating new work, but helping to see that work to successful fruition. JAW plays have also gone on to receive world premiere productions at professional theaters across the country and beyond, including New York Theater Workshop, Steppenwolf Theatre, and Berkeley Repertory Theatre.

ACCESSIBILITY: Learn about our accessibility options at www.pcs.org/access.

'2019 JAW: A PLAYWRIGHTS FESTIVAL' has no comments