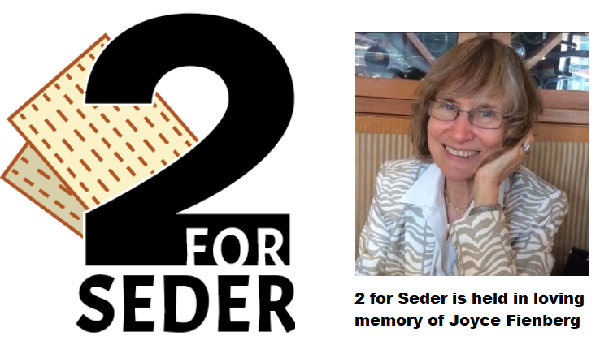 A family member of a victim of the massacre at the Pittsburgh Tree of Life Synagogue has created “2 for Seder,” aimed at tackling anti-Semitism at the grassroots level.

The 2 for Seder event encourages Jewish families to welcome two non-Jews into their seder to experience first-hand the most celebrated Jewish holiday of the year in America. Opening the seder to newcomers can dispel myths that breed misunderstanding, and directly fight biased attitudes.  By opening up one’s seder, Jewish families start a dialogue with non-Jewish friends and create a lasting ripple-effect.

“We are asking as many Jewish families as possible to participate in 2 for Seder this Passover,” says Marnie Fienberg, founder the 2 for Seder event. “We believe that all American and Canadian Jews can take active steps to push back against anti-Semitic acts like the shooting in Pittsburgh that touched my family so closely, through better understanding and openness.  Inviting non-Jews to share seder at Passover, one of the most popular Jewish holidays, is a start.”

“2 for Seder is inspired by my mother-in-law Joyce Fienberg, who was one of 11 people murdered at the Tree of Life Synagogue in Pittsburgh, Pennsylvania, on October 27, 2018,” says Fienberg.  “Joyce always invited friends, neighbors, co-workers and international students to our family’s holiday meals.  Her generosity and openness meant new people were regularly a dynamic part of our family’s holiday meals. With 2 for Seder we’re following her example.”

Host families are encouraged to sign up to show they are participating and receive a 2 for Seder Kit at www.2forseder.org.  This first event is being held across the United States and Canada.  The goal of 2 for Seder 2019 is to have 1,000 participating seders, with at least 2,000 new people experiencing this most Jewish of holidays.

Participating in 2 for Seder allows everyone across the country to stay in touch with Pittsburgh while taking positive action to push back against the misunderstandings and unfamiliarity about Jewish customs that can become the seeds of antisemitism.  Together we can fight hate.

The 2 for Seder event is managed by Pittsburgh Idea Evolutions, an emerging nonprofit focusing on innovations and new approaches to help American and Canadian Jews participate in the fight against anti-Semitism.  The 2 for Seder event is held in partnership with the Jewish Community Center in Greater Pittsburgh as well as the Federation of Greater Pittsburgh, the Anti-Defamation League, AJC, Hadassah, synagogues across the country, and many other Jewish professional groups fighting anti-Semitism.