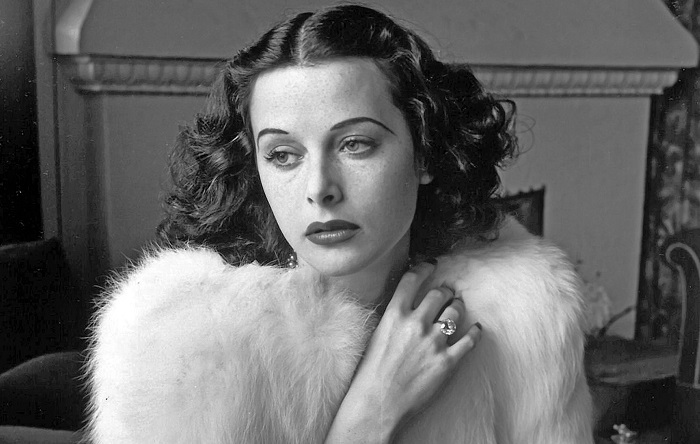 “Bombshell: The Hedy Lamarr Story” is presently in theatrical release and airs in May on PBS’ “American Masters.” OPB will air the episode twice: noon-1:30 pm, Sunday, May 20, and 1-2:30 am, Saturday, May 26. The film screened at Portland’s Living Room Theater in January and at the Corvallis Jewish Film Festival in April.

In 1933, the Viennese actress Hedy Kiesler sparked an international furor by swimming nude in a provocative melodramatic film titled “Ecstasy.” Alas, it was the tragic fate of Hedy Lamarr, as she was renamed when she arrived in Hollywood, to be perpetually judged by her face and figure rather than her intellect.

A splendid study of an extraordinarily complicated and conflicted person, Alexandra Dean’s “Bombshell: The Hedy Lamarr Story” recounts the actress’s and inventor’s litany of innovations and achievements alongside her frustrations and failures. The documentary, which screens in the Lenore Marwil Detroit Jewish Film Festival, is most fascinating when it shifts from Hedy’s ambivalence toward Hollywood glamour to her wartime invention of a secure communication system.

The beloved daughter of a Jewish banker, Hedy had a comfortable childhood before gravitating to the theater and movies. Fleeing a youthful marriage to a Jewish fascist who made arms for the Nazis, as well as the gathering storm in Europe, she purchased passage on an ocean liner. Aboard ship, she parlayed her bravado and striking good looks into an introduction to MGM executives and, eventually, studio mogul Louis B. Mayer in Los Angeles.

“My grandfather fled the Nazis in a very similar fashion, on a boat where he met someone from Samuel Goldwyn’s shop and ended up in Hollywood, and it saved his life,” Dean said in an interview last summer when Bombshell screened at the San Francisco Jewish Film Festival. “He became a very powerful individual, and he did not like having been victimized by the Nazis and he kind of whitewashed that entire episode in his life. He didn’t think of himself as a victim, and he didn’t want to think of his family or his tribe as victims, so being Jewish was a complicated thing for him.”

Dean, a journalist who produced newsmagazine segments for Bill Moyers and PBS and documentaries for Bloomberg and wrote profiles for Businessweek magazine, saw in Hedy a similar refusal to be defined by her background or circumstances.

“She also had the same kind of complicated relationship with being a woman,” Dean says. “She wanted to be Louis B. Mayer, she wanted to be Cecil B. DeMille. She didn’t want to identify as a woman, and she didn’t want to identify as a Jew. Of course, it creates a schism in your psyche. It means your roots are cut off from you, and in some ways you are floating in the world rootless. And what does that do to you? I think if you don’t understand her relationship with being Jewish, you don’t understand why she was such a broken person.”

Dean asserts that Hedy’s Jewishness was directly related to her development of a ship’s communication system that the Nazis couldn’t break. The actress wasn’t allowed to be open about her identity in her day job, because Mayer believed that audiences wouldn’t fantasize – a base but key aspect of movie-going – about a Jew. At the same time, the Nazis were blowing up ships in the Atlantic with European Jewish children on board. Oh, and Hedy’s mother still needed to get to America.

The mother converted to Catholicism in 1938 in Vienna, and Dean had assumed that her motivation was to make it easier to escape the Nazis. Then she discovered a letter that Hedy had written saying, “Please do this for me, because I don’t want to be identified as a Jew in Hollywood.”

The psychological effect of Hedy’s subterfuge mingled with her sorrow for the destruction of European Jewry is difficult to calculate, but it subsequently manifested itself in the insistence to her children that she wasn’t Jewish. In fact, Dean was compelled to confront Hedy’s offspring with their grandfather’s death certificate, evidence of his burial in a Jewish cemetery and their grandmother’s conversion papers.

Dean’s greatest challenge in Bombshell was conveying Hedy’s many contradictions: strength and shallowness, altruism and cruelty, desire and despair. The film manages to be surprising and unexpected yet utterly relevant in its portrayal of a woman stymied in her efforts to win respect on her terms.

“People are very quick to dislike Hedy Lamarr,” Dean says. “It appalled me and made me extremely sad that people wouldn’t give her any leeway to express herself. So I struggled to give her enough of a leash, in the way that she described herself and interacted with other people, that people would understand her and allow her to be a complicated person but still like her.”

Michael Fox is a film reviewer based in San Francisco.