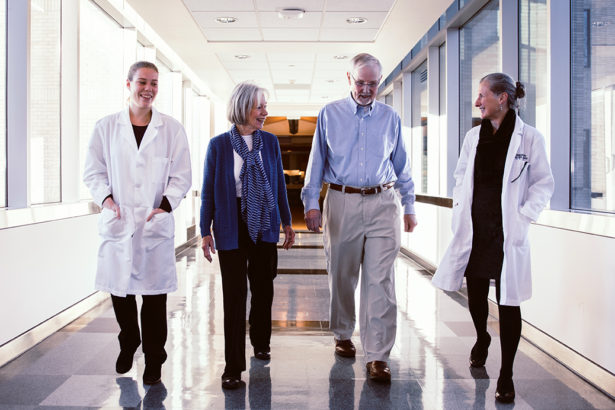 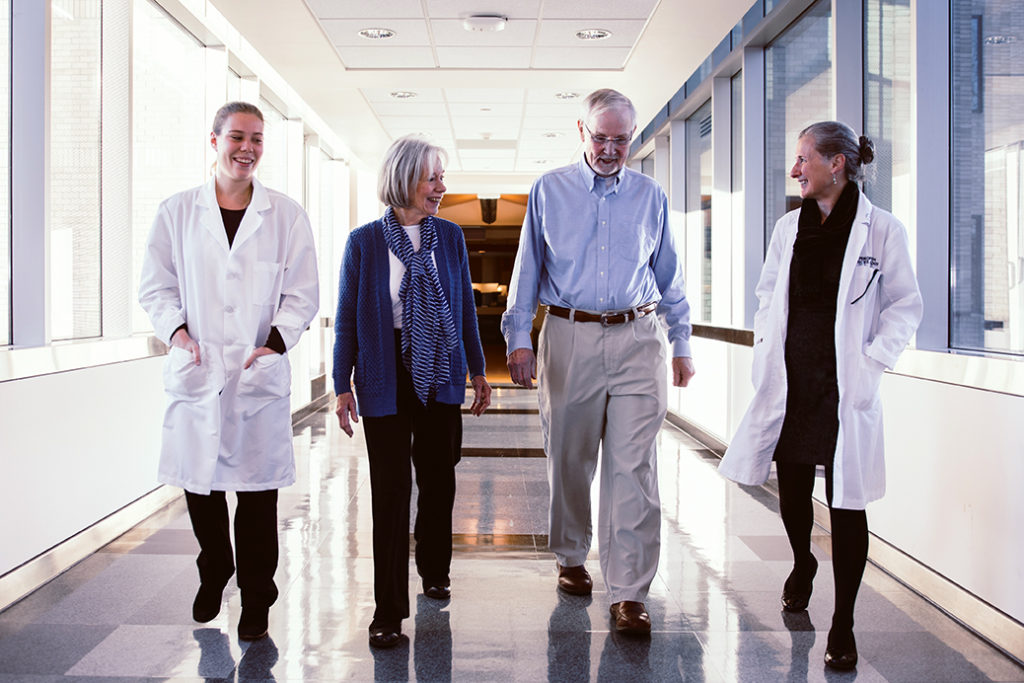 PHOTO: Movement disorders neurologist, Dr. Penelope Hogarth (right), and her study coordinator, Katrina Wakeman (left), chat with a couple who have been a part of the PPMI research study at OHSU for six years. Photo by Naji Saker

You make lifestyle choices every day that affect your health. Perhaps you eat a healthy diet and refrain from smoking. Maybe you keep your brain active by doing crossword puzzles and maintaining a vibrant social network. Perhaps the new year has brought with it the perennial resolution to exercise regularly.

However, you can’t choose your genetic makeup, and as you may already know, individuals of Ashkenazi Jewish ancestry have a greater likelihood than non-Jewish populations of harboring a gene that puts them at increased risk of developing breast and other cancers, or to be carriers of genes for conditions such as Tay-Sachs disease or Gaucher disease.

Recent research has shown that there may also be a genetic component to Parkinson’s disease that has implications for the Jewish community. A team of researchers at Oregon Health & Science University is partnering with the Michael J. Fox Foundation to learn more about the connection between Jewish heritage and Parkinson’s disease. You may be able to help and, by doing so, add to the list of ways you can actively contribute to your future health.

First, a quick refresher of DNA, chromosomes and genes.

DNA is packaged by the body into 23 paired structures called chromosomes, one chromosome in each pair coming from one’s mother and the other from one’s father. Within each chromosome are thousands of genes, which regulate certain functions of the body. Sometimes multiple genes are needed to control one function. Other times, just one gene can influence multiple parts of the body.

Parkinson’s disease is a progressive neurological disorder that affects about a million people in the United States, causing tremors and difficulty with walking, balance and movement. In the vast majority of cases, the cause of Parkinson’s disease in an individual is unknown. However, in rare instances, the disease may be associated with a genetic “misspelling” (or mutation).

Approximately 10% of all cases of Parkinson’s are thought to be genetic in origin. Two genes in particular, called LRRK2 and GBA, have been shown to be associated with an increased risk for Parkinson’s disease.

Though individuals of any ancestry may carry a LRRK2 or GBA mutation, both genes are more common in families of Ashkenazi Jewish heritage. The risk of carrying a single GBA mutation is less than 1 in 100 for non-Jewish populations, but about 1 in 18 for those of Jewish descent. The LRRK2 gene is responsible for only 1-2% of ALL Parkinson’s cases, but it is believed to account for approximately 15-20% of cases of Parkinson’s disease in individuals of Ashkenazi Jewish ancestry.

The GBA and LRRK2 genes

The story behind the GBA gene and Parkinson’s disease is interesting.

Gaucher disease, which causes the buildup of a fatty chemical in the liver, spleen and sometimes brain, results when a child inherits two mutations in the GBA gene, one from each parent. Individuals with a mutation in just one copy of the GBA gene – for instance, the parents of a child with Gaucher disease – were not thought to be at increased risk for Gaucher or any other disease until recently. However, an observant doctor/researcher began to suspect a connection between the GBA gene and Parkinson’s when she noticed that people with Gaucher disease and their relatives seemed to develop Parkinson’s disease more often than expected by chance. Further investigation led to the discovery that carrying even a single copy of the GBA mutation increases the risk of developing Parkinson’s disease. Similarly, having just a single copy of the LRRK2 gene increases your risk of Parkinson’s.

Biology is never simple, though. While having a mutation in either the LRRK2 or GBA gene does indeed seem to increase a person’s chance of developing Parkinson’s disease, many gene carriers never go on to develop symptoms of the disease. A landmark study sponsored by the Michael J Fox Foundation called the Parkinson’s Progression Markers Initiative is trying to develop tools that will help us predict who will get the disease, with the ultimate goal of preventing it. OHSU is one of 33 sites in 11 countries selected by the Fox Foundation to be a part of this important study.

Am I at risk for Parkinson’s disease?

PPMI is currently seeking volunteers who meet one of the following criteria to be screened for the genetic arm of this study:

• Ashkenazi Jewish people over the age of 45 without PD who are first-degree relatives (parent, child, sibling) of someone with PD

• People over the age of 45 who already know they have a GBA or LRRK2 mutation from prior testing. This would include people with Gaucher disease and their first-degree relatives; and people who have had positive testing through “23andMe” or other genetic testing.

• People over the age of 45 who have a first-degree relative (parent, child, sibling) with one of these mutations.

PPMI is an observational study, meaning that participants do not take an experimental drug or placebo. Individuals who meet recruitment criteria may be eligible to receive genetic counseling and testing at no cost to determine if they may qualify to participate in PPMI. Because not everyone at risk for a disease such as Parkinson’s wants to know about that risk, individuals without Parkinson’s disease can choose whether or not to receive results of genetic testing. Participants will receive compensation for their participation in the study.

Penelope Hogarth, MD, is the principal investigator on the study and the study number is eIRB 6459. If you are interested in learning more about this research study, you can email the study coordinator, Katrina Wakeman, at ppmi@ohsu.edu. You can also proceed directly to a study screening questionnaire online at michaeljfox.org/ohsu.

WHAT: YOUR GENES, YOUR HEALTH, an educational event about genetic risk factors for Parkinson’s disease and cancer

WHERE: Vey Auditorium in Doernbecher Children’s Hospital at OHSU

FREE RSVP FOR FREE LUNCH: Please RSVP (by Jan. 12 if you would like lunch) to ppmi@ohsu.edu. A packet with directions and parking information will be sent on request.