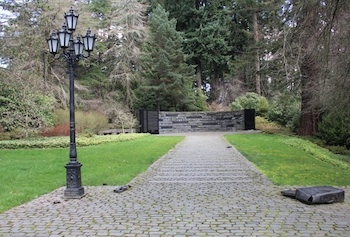 A new exhibit at the Oregon Jewish Museum and Center for Holocaust Education chronicles the first decade of Oregon’s Holocaust Memorial, established in 2004 by a broad coalition of local groups both to honor those who died and to educate generations to come.

The exhibit places the Oregon Holocaust Memorial, located in Portland’s Washington Park, in the context of other Holocaust memorials throughout the world. It also chronicles the building process from design to execution. “Above all,” notes Museum Director Judith Margles, “it serves as a potent reminder that bigotry, hatred and racial prejudice of any kind are unacceptable in a civil society.”

Planning for the Oregon Holocaust Memorial began in 1994 when a group of community-minded citizens gathered to create a memorial to the victims of the Holocaust – including five million non-Jews as well as the six million Jewish victims. A special memorial wall includes tributes to 853 people who perished in the Holocaust; the people named on the wall had ties to 185 Oregon families.

Since its dedication on Aug. 24, 2004, the memorial has been the site where thousands of visitors – school children and adults – have learned about one of the greatest atrocities in the history of humankind.

Regular exhibition gallery hours are Tuesday through Thursday from 10:30 am to 4 pm, Friday from 10:30 am to3 pm. and Saturday and Sunday from noon to 4 p.m. Admission is $6 for adults, $4 for students and seniors, and free for members and children under 12 accompanied by a parent or guardian. Access to the research library is by appointment only.