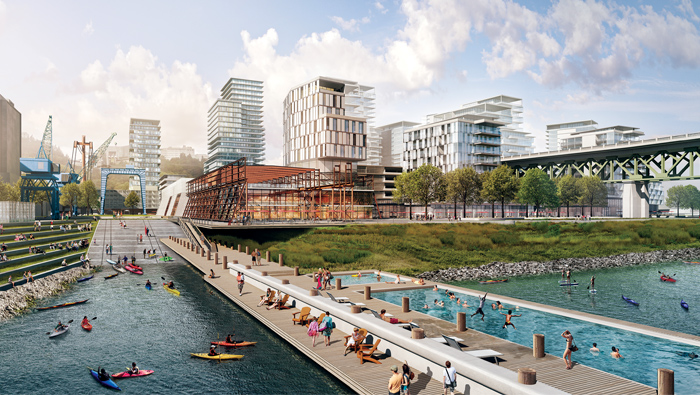 As the last barge built by the Zidell Companies is launched from the barge house in June, the Zidell family turns their full attention to developing the family’s 33 acres on Portland’s South Waterfront into a mixed-use development with a sense of community and green space.

“Because we are a small family and own the land, we have the flexibility to develop it our way and wait till we can carry out our vision,” says Charlene Zidell, director of corporate relations and communications for the companies founded by her grandfather, Sam Zidell. “We have a vision of creating a community where people care about one another.”

Charlene and her brother, Jay Zidell, the third-generation leader of the Zidell Companies, have long followed in the philanthropic footsteps of their late parents, Emery and Min Zidell. Education, health, the arts, job development and the Jewish community have all benefited from the family’s generosity. Through financial and volunteer contributions, they have followed the instructions Charlene says her father gave her when she was 14.

“My dad loved work,” says Charlene. “He was a visionary and entrepreneur and was sick a lot, suffering from headaches.” Emery also developed breast cancer, a disease that is now a focus of the family’s philanthropy. So she says she clearly remembers the day he spoke to her very seriously. “When I was 14, he called me in to his room and said, ‘Don’t ever forget where you came from – nothing. You have an obligation to give back and take care of those less fortunate.’ ”

The Zidells are continuing that commitment to community with their development plans.

In 2001 Charlene, Jay and their sister, Vicki French, and their mother Min, z”l, began a visioning process for the property. Vicki’s son, Matt French is now a director of the family’s ZRZ Realty Co.

Zidell Yard, as the development will be known, will include retail, office, parks and housing (rental and owned; luxury and affordable). One of the parks will include river access, and the Willamette Greenway Trail will extend through the property.

“We are the missing link to the greenway completion,” says Jay.

In 2013 the first building in the development plan opened. The Emery Apartments offer a preview of some of the values the family wants to share. Well-designed, eco-friendly apartments are located over ground-floor retail that opens onto a social front-porch setting and gathering areas designed to create personal connections to the neighborhood.

Jay says the family journey from industrialists to developers actually began much earlier – in 1994. “We received a letter from DEQ (Oregon’s Department of Environmental Quality) inviting us into a voluntary cleanup program.”

Jay says the family spent the next 23 years dealing with the environmental issues that had arisen from more than 100 years of varied industrial activity on the site. It was the largest privately funded environmental remediation project in Portland’s history. The only remaining cleanup, which Jay says will not impede development, is at the barge construction site, where cleanup will begin as soon as the last barge leaves.

Jay has been part of The Zidell Companies “since birth – I was born into it. When I was 8 I had my first job filing for my father’s secretary.” Jay spent summers during high school and college working in the business and joined the company full time in 1971. Charlene joined the family business in 2012 on the 100th anniversary of her grandfather’s immigration from Russia to Oregon. Sam Zidell started selling goods and equipment soon after arriving in Portland; in 1928 he leased the waterfront property that is part of the 33-acre tract the family is now developing.

The next buildings are expected to be completed in 2020. Continuing development will be driven by the market.

The development will include a nod to the past.

“We have significant interest by retail tenants who like what the barge building stands for and looks like,” says Jay. “We hope to repurpose it for their use.”

A heritage park located next to the barge building will feature some industrial artifacts, such as immobilized Whirley Cranes and Gantry Cranes, to preserve the legacy of the property.

“We think they are a material component of the legacy of the use of the site,” says Jay.

Charlene says the new development will tie into the area’s health and transportation ecosystem. “We are intentionally developing a community where it is easier to think about health and wellness. People will be able find a place in the 33 acres where they can walk and be a community.” Incorporating arts and culture into the neighborhood’s social structure is another goal. “I want to create performance space and find ways to provide programs in nonprofit housing.”

Charlene says they hope to recreate the sense of community largely lost in today’s busy world. She wants the development to be a neighborhood where people gather, know each other and look out for their neighbors.

“This property was special for our family, so whatever we do has to be special to the family and to the people of Oregon,” says Charlene.