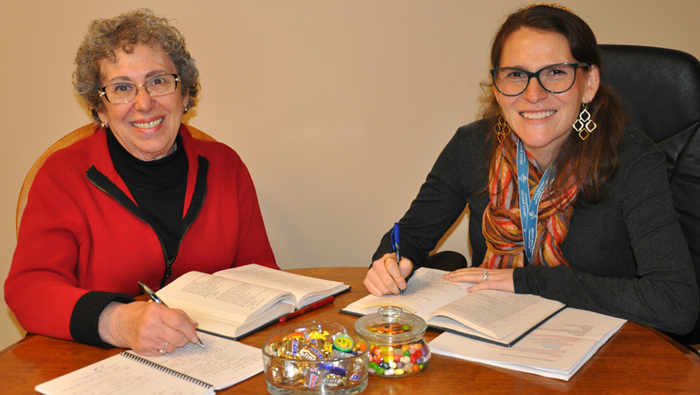 Two moms – a rabbi and a congregant – started a conversation about women’s voices in the Torah. Now they are inviting other women to join an online conversation that may evolve into a book of mothers’ wisdom.

“My goal is to start conversations on women’s voices in our ancient texts,” says Rabbi Eve Posen. “We started a conversation and it led us here. Now we are inviting other women to join the conversation. We are keeping it open to see where it goes.”

The conversation began last August when Lois Shenker walked into Rabbi Posen’s office at Congregation Neveh Shalom and said she wanted to learn with the rabbi weekly. After Lois rejected the idea of studying the weekly Torah portion, Rabbi Posen mentioned she was studying Pirkei Avot (Ethics of Our Fathers).

“I know Lois likes a good project,” says Rabbi Posen. “We started to put a woman’s voice to it (Pirkei Avot).”

Whereas Pirkei Avot focuses on wisdom of the fathers, Lois says that their project explores the wisdom of mothers.
“As we read, we think about how women would say it differently or how this relates to women,” says Rabbi Posen.

The original voices in the conversation already bring diverse backgrounds to the project. Born in Detroit, Rabbi Posen, 33, has served as the rabbinic educator and youth director of Congregation Neveh Shalom since August 2014; she and husband, Duncan Gilman, are parents of Shiri Gilman, 2½, a student at Neveh Shalom’s Foundation School. Born and raised in Portland, Lois, who turns 79 on May 9, is a Jewish educator, author and life coach; she and husband, Arden, have three children (Joel and Jordan Shenker, and Diana Ayton-Shenker), 10 grandchildren and three great-grandchildren.

With the March 13 launch of wisdomofmothers.com, they invite everyone who self-identifies as a Jewish mother, or who has a Jewish mother, to join the conversation. The website offers two ways to participate. The site provides a form to submit Words of Wisdom. Additionally, each month the site will include a photo and a prompt to inspire women to share their wisdom. (Mother’s Day Prompt: Have you turned into your mother? Do you find yourself using or thinking about phrases your mother used? Are there sayings of your mother’s you live by day to day? Do you find yourself saying, “As my mother used to say…” If the answer to any of these questions is, “Yes!” then share your wisdom about becoming your mother.)

Pirkei Avot is rabbinic commentary written by men in the second century. Lois and Rabbi Posen envision “Pirkei Imahot: The Wisdom of Mothers” as a companion piece that will offer a woman’s perspective on the teachings received by “all of Israel.”

“We are integrating discussion of Pirkei Avot with words of wisdom submitted by Jewish women, including female clergy,” says Lois.

The planned book, which they hope to have out for Jewish Book Month (November) of 2017, will also include a study guide to keep the conversation going among those who read the book. The website describes the project as “a book written by women for women, adding modern words of wisdom as guidelines for daily living and providing an opportunity for a new and stronger voice within the Jewish world.”