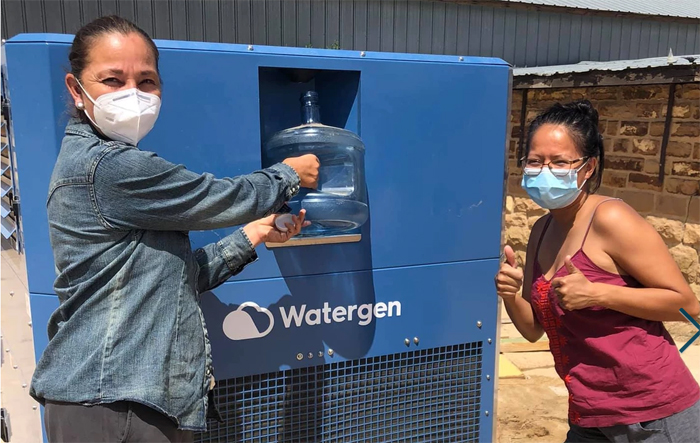 Dr. Michael Mirilashvili, President and CEO of Watergen, said, “The drinking water crisis is the most important issue of our time, and it is for that reason that Watergen is working tirelessly to realize one goal: to bring drinking water from the air to people everywhere. When I heard about the dire situation in Navajo Nation, I immediately decided that Watergen would be active in delivering our solution there as quickly as possible. It is our great pleasure to work together with the local leadership, StandWithUs, and BPS in providing this sustainable and innovative source of clean drinking water. The result will be increased water access to local residents, which in turn fosters better public safety and health in this time of crisis. I am sure that this is just the beginning, and that together we will bring even more devices to the region and to Native American communities around the country.”

Watergen’s innovative technology creates high-quality drinking water from the air, and this project aims to address the lack of access to clean drinking water within the Hard Rock community. According to recent estimates, nearly 10,000 families across Navajo Nation lack access to running water.

Nicole Horseherder, Executive Director of Tó Nizhóní Ání, said, “we live in a region in which drinking water sources have been compromised by coal mining. Any way to mitigate the need for water while the aquifers recover is critical.”

TNA worked with Germaine Simonson and Marvin “Callo” James, owners at RRGM, to prepare the site and install the electrical hardware needed to operate the GEN-M.

Deputy Secretary Teller said, “Tó ííná át’é. In translation: ‘Water Is Life.’ Ms. Germaine Simonson and Ms. Nicole Horseherder have led this community-based effort to assure installation of this machine is operable and servicing community members. I am very excited about our collaboration with Watergen, StandWithUs, BPS, and Rep. Alma Hernandez to address the lack of potable water in the Rocky Ridge/Hard Rock communities.”

“StandWithUs is honored to work with members of the Navajo Nation on this important pilot project, and hope it is the first of many we do together,” said Max Samarov, Executive Director of Research & Strategy at StandWithUs. “We are also deeply grateful to Watergen and their visionary President, Dr. Michael Mirilashvili. This partnership is a unique opportunity to engage with Israel and help ensure Watergen’s technology reaches communities that need it most.”

“Access to clean drinking water has long been a threat to many Native communities and the onslaught of climate change is accelerating this challenge. Bright Path Strong is grateful for the opportunity to partner with Watergen to bring their life-giving technology to help alleviate this need within tribal communities—areas where some of the most vulnerable reside,” said BPS Board Member Dennis Hendricks.

The Watergen GEN-M produces up to 211 gallons of purified drinking water per day, depending on climate conditions. Watergen, 4D, and TNA will monitor its effectiveness in the Hard Rock Community, and evaluate whether Watergen’s technology can help other communities within the Navajo Nation.

Watergen, Bright Path Strong, 4D, and StandWithUs have also partnered to promote a crowdfunding campaign aimed at bringing the GEN-M to additional Native American communities. As part of that campaign, Watergen and 4D are matching donations up to $400,000.

Watergen and StandWithUs are working together on additional projects inside and outside the U.S., which will be announced as they are implemented. For StandWithUs, this partnership is at the center of a larger initiative called Connect for Progress.