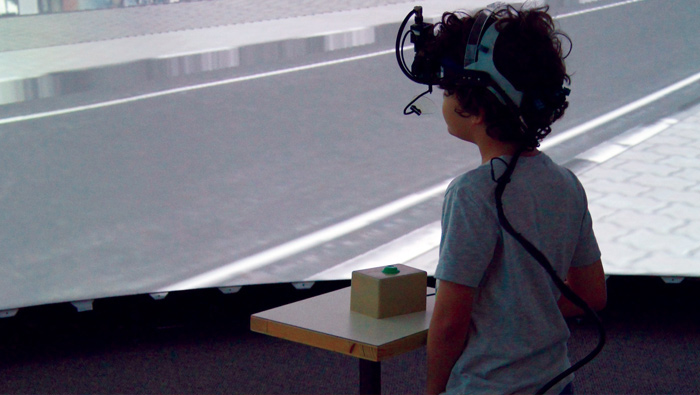 This is no game: Young pedestrians are at risk crossing streets

“Look both ways before you cross the street” may be sage advice, but it is also apparently necessary for children as old as 13 according to a new study by Ben-Gurion University of the Negev researchers, who have pinpointed many of the behaviors that lead to child pedestrians being hit by cars.

Traffic accidents are one of the most common sources of injuries and fatalities for children on foot around the world. In Israel, automobiles cause 2% of child deaths.

The study, published in the online journal Safety Science (Elsevier), was conducted at the BGU Virtual Environment Simulation Laboratory, one of the world’s most sophisticated traffic research facilities, which enables researchers to measure pedestrian reactions to virtual reality scenarios.

“While we already knew that children were less able than adults to recognize road crossing hazards, our goal was to pinpoint which behaviors might lead to accidents and develop training to correct them,” explains Anat Meir, Ph.D., a lecturer in the Department of Industrial Engineering and Management. Other researchers involved in the study include Prof. Tal Oron-Gilad and Dr. Yisrael Parmet.

The study examined experienced-based hazard perception differences among child pedestrians and relative to experienced adults. Overall, the experimental design included groups of 7- to 9-year-olds, 9- to 10-year-olds, 10- to 13-year-olds and experienced adult pedestrians. The study simulated 18 prototypical streets in Israel and used an eye-tracking device to study how 46 adults and children evaluated when it was safe to cross. Participants’ eye movements were recorded to identify areas or objects of interest and unique behaviors.

“As predicted, we found that child pedestrians age 7 to 10 had the most difficulty in identifying when it was safe to cross and recognizing hazards caused by parked vehicles or curvature in the road that restricts field of view,” Dr. Meir says.

Older children did not perform much better and lingered on the curb for an excessive amount of time, which indicates that they are less able to distinguish between safe and hazardous situations than adults. In interviews, the children did not express an understanding of how crossing safety could be impacted by factors such as car speed and field of vision.

“These results can serve as a tool to construct a hazard-perception training intervention for youngsters,” Meir says. “Moreover, the differences that emerged between the various age groups reinforce that child pedestrians cannot be trained as a group, but rather the training needs to be adjusted to the level of experience the child has gained.”

More effective training based on Meir’s research may already be working. She recently conducted another study on hazard-detection training of 7- to 9-year-olds and then compared their performance to untrained children. The children who had undergone training faired significantly better, approaching the skills of an adult pedestrian.

The study, “Are Child-pedestrians Able to Identify Hazardous Traffic Situations? Measuring Their Abilities in a Virtual Reality Environment,” was funded by the Ran Naor Foundation.

American Associates, Ben-Gurion University of the Negev plays a vital role in sustaining David Ben-Gurion’s vision, creating a world-class institution of education and research in the Israeli desert, nurturing the Negev community and sharing the university’s expertise locally and around the globe.