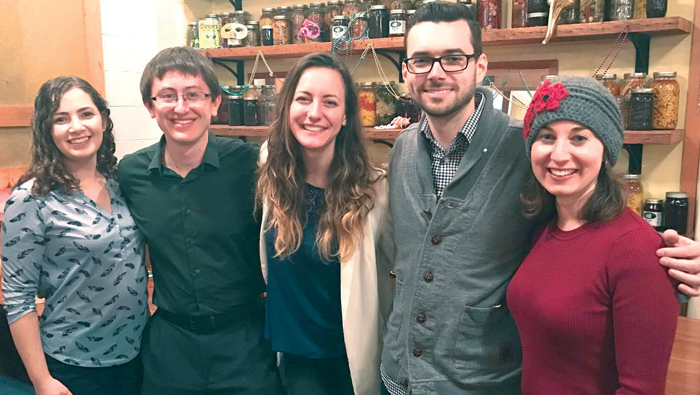 Natalie was in the United States to accompany two Austrian teenagers to the BBYO International Convention and extended her stay at the request of Jessie Bustamante, Moishe House West Coast director of advancement. The two had met when Natalie served as a translator for a Moishe House group touring Bulgaria to learn about the Jewish community there and the role of Moishe House in Europe.

Jessica says she invited Natalie to visit Portland because she wanted to share a global perspective with the local community and “to bring new ideas here and I hope she brings tips back to Vienna and Bulgaria.”

Natalie was born in Sofia, Bulgaria. Her family lived in Israel when she was ages 2 to 7. After returning to Bulgaria, Natalie attended Jewish day school and Jewish summer camps including Camp Szarvas, an international camp funded by the American Jewish Joint Distribution Committee.

From the time she was 14, she has held leadership roles – first in Jewish youth groups and now as an adult. Her first visit to the United States was in 2009 when she was sent to a BBYO international leadership training conference. She spent two years at the Adaracha College leadership training program, which poised her to serve as program coordinator and group leader at Camp Szarvas.

“I was planning programs for kids two years older than me,” she says.

With the goal of moving to Vienna for college, Natalie spent her last couple years in high school studying economics and German at a non-Jewish school. She maintained leadership roles in BBYO and at camp and attended several more BBYO conventions.

After moving to Vienna to study at the Economics University of Vienna, she began teaching Israeli dance at the Israeli Sports Club, and soon added another dance class at the Jewish Institute of Vienna. She also stayed active in Jewish Student Union activities and attended JDC programs around Europe.

After a friend attended a Moishe House retreat in Paris, he wanted Natalie to help him organize events for a Moishe House Without Walls in Vienna. But program leaders are required to attend a retreat, so in December 2015, she did.

“I had no expectations,” she says. “I was used to JDC programs.”

“After two and half days in Prague, I got very inspired. I got motivated to instead of planning Moishe House Without Walls, I wanted a real Moishe House with walls in Vienna.”

Vienna Moishe House opened 10 months later with Natalie and four other residents (three of whom are Americans). All five are college students, unlike U.S. Moishe Houses that are typically post-college residents.

“We live in the center of Vienna,” says Natalie. “We usually have seven events per month.”

The Vienna house holds monthly Shabbat dinners and a reading group, celebrates Jewish holidays and is helping clean up a Jewish cemetery. Natalie, of course, leads an Israeli dance class there, too. One creative idea is Charity Yoga, which charges a symbolic tax to participate; the collection is donated to different causes such as refugee groups or renovating a Bulgarian synagogue.

“I have five or six jobs,” she says, noting all are in the Jewish community. She is on the staff of the new BBYO group in Vienna, which she co-founded. And in cooperation with the chief rabbi of Vienna, she puts on Shabbat dinners for teens and their parents.

“After so many emails and hard work, we have BBYO Vienna and a working Moishe House,” Natalie says. “I’m happy I managed to be part of those ideas and initiatives.”