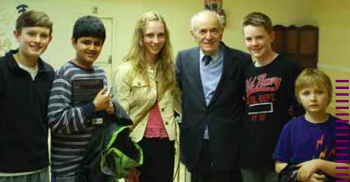 The traditional 10-year anniversary gift is tin. But at Tulen Center the milestone gift is something more permanent and much less flimsy: self-confidence. And the center doles that out daily, not just for special occasions.

Tulen Center, in Scholls Plaza in Raleigh Hills, teaches the Indonesian martial art of Poekoelan Tjimindie Tulen. The center’s founders, husband/wife team Jeff Denson and Silvia Smart, write on the center’s website that Poekoelan “draws on the most effective elements of judo, kempo, kung fu and karate.”
They continue, “Since Poekoelan is a complete martial art, it’s much more than just self-defense. (Our) students find well-being and empowerment of body, discipline of mind and strength of spirit.”

In the 10 years since Tulen Center’s founding, Denson and Smart each have earned the art’s highest level, Goeroe (pronounced GOO-roo), which is a fifth-degree black belt. As their center has gained adherents through creative and increased programming, it’s turning out ever more confident kids, teens and adults. Since 2003, Tulen Center has grown from four students of all ages to 84 Poekoelan practitioners.

Take Zoë Drozdowski, 11, who attends Maplewood Elementary School and has been training in Poekoelan since she was 8. At first, this petite fifth-grader found the idea of Poekoelan itself exotic, but soon she was hooked on the martial art for more profound reasons.

“It being a martial art form from Indonesia was the first thing that attracted me to participate. The caring and kind staff and peers keep me going back,” she says. And it’s a good thing she does. She shares the following story: “When I got hit by a fourth-grader last year, I had the confidence to stand up for myself and tell him to back off.”

Chris Binnett recounts a similar Tulen Center effect on his daughter, Audrey Binnett, 10, also a fifth-grader. Chris is a long-time practitioner of Shaolin Kung Fu and wanted a martial art to be part of his daughter’s life, too. Chris says he likes Poekoelan’s inclusion of meditation, which helps connect the mind to the body. “The most im- portant thing (in martial arts) is connecting the self with the body through physical motion, and Tulen Center does that,” Chris explains.

Audrey, who attends Raleigh Park Elementary School, has been practicing Poekoelan for three years and recently earned a rank that allows her to teach other students – both children and adults – key skill sets. Just as Poekoelan emphasizes flexibility of mind and body to all its students and teachers, Smart and Denson demonstrate their flexible thinking via ever-expanding activities and courses at Tulen Center.

In addition to offering a bevy of classes taking practitioners through every level of the discipline, the center runs summer camps and community-building events, like family nights at the Copper Monkey Event Center in Beaverton, where students and their parents cut loose playing laser tag and video games that are throwbacks to the Pac-Man-centric 1980s.

Smart instructs a variety of one-off self-defense classes for free all around the Portland metro area, including at Portland State University, recreation centers, and elementary, middle and high schools.

Tulen Center classes and activities always are upbeat, but are infused, too, with a sense of the real world. For example, Tulen Center’s Ken Westin – a Poekoelan black belt – has a background in the technical side of law enforcement, including having developed technologies used by the U.S. Homeland Security Investigations’ Child Exploitation Investigations Unit.

Explains Smart: “Although our program provides skills for dealing with physical dangers, we are quite aware of how the virtual world has become intertwined with our daily lives.”

Dangers indeed are out there, and self-preparation should become a way of life. So, too, must the basics, like listening to and respecting authority figures and cleaning up after yourself. Kati Carney, mother of Thomas Carney, 6, said her son’s beginning Poekoelan classes are very disciplined. “I’ve never seen a class with kids those ages where no one breaks off; they all just listen, pay attention and stay together. They all have a lot of focus,” Kati says.

Chris Binnett, Audrey Binnett’s dad, is a big Tulen Center fan; he wishes its instructors could reside on his daughter’s shoulders. “In most aspects of her life, she’s almost flaky and unguided,” Chris says of his daughter. “But for some reason, the Goeroes (Smart and Denson) got her number early. She works hard and always wants their respect. I keep joking with them, ‘Could you get her to clean her room?’ ”