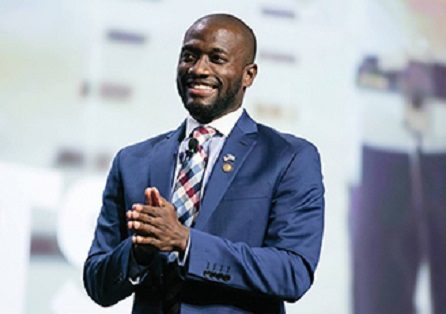 Tremayne Smith has become a very outspoken advocate for Israel. His passion for American-Israeli relations from a political perspective began in college at East Carolina University, where he was the student body president. It came alive for him when he participated in Jewish National Fund’s Caravan for Democracy Student Leadership Mission in January of 2017.

The Caravan for Democracy Student Leadership Mission is a 10-day, fully subsidized educational program to Israel for non-Jewish student leaders who have never been there before.

This exceptional trip enables students to explore Israel through meetings with political, cultural and community leaders from diverse backgrounds and faiths. Ideal candidates are American students who hold significant leadership positions in student government, ethnic and minority groups, LGBTQA groups, women’s groups, service groups and Greek life. They generally are sophomores, juniors or seniors at the time of travel.

When he heard about the Caravan, Tremayne says, “I thought this is like Birthright for us gentiles. I applied not thinking I would get it because there are so many other people who I imagined were more involved. I applied anyway because you miss 100% of the balls you don’t swing at.”

Tremayne was accepted as one of the few graduate students on the trip.

He feels that the trip was a great sampling of Israel – geographically, culturally and sociologically. “We traveled from the Golan Heights and Haifa up north; down to Beersheba and Negev in the south; Masada, Jerusalem and of course Tel Aviv.

We spoke with former members of the Knesset; we had dinner with Druze and Bedouins – it was a very good overview of the country.”

The more than 25 young adults on the trip became very close.

“We are the future decision makers, future politicians – I am a future president,” says Tremayne seriously. “I am so grateful to JNF in investing in word and in deed; not to indoctrinate folks but to offer an opportunity to see it for yourself and come to your own conclusion, and then do something about it.”

When he returned, he discovered an anti-Israel BDS resolution had been submitted to the student senate at George Washington University. He believed the resolution would pass due to the composition of the student body and the organization of the people behind it.

“I reached out to a senator who was for the resolution,” says Tremayne. “I wanted to understand what his reason was. I was quickly told it was none of my concern.

That lit the fire for me. As a fee and tuition-paying student, and as a new alum of Caravan for Democracy – it was my business.”

The meeting was the same night he was defending his master’s thesis.

“I ran to the senate meeting, and I got my two minutes to speak. I very forcefully came out against the resolution for a number of reasons.

One, that it would not have the desired effect that they wanted.

It was a one-sided hollow gesture and it was not anything that was right for our campus or the sake of peace in the long run,”

From there Tremayne realized the power in words and the power in sharing your experiences. Not talking at people, but to them. “That’s how I got involved with JNF,” he says.

While Tremayne was in Israel he reconnected with Caleb, whom he had met at an AIPAC conference 10 years earlier.

Caleb, a Californian with dual citizenship, returned to Israel to serve in the IDF. “We both went to the (Western) Wall. We put one arm around each other and touched the Wall with the other arm. … You have this white, West Coast Israeli who was praying in Hebrew with this black, Southern Christian praying in English, but we were both praying to the same God, for the same peace. That still gets me choked up. That was a moment that sort of put things in perspective. If we can somehow encapsulate this and multiply this.”

Butterfield, D-NC, chief deputy whip of the U.S. House of Representatives. Now that he has finished his master’s degree in political management, Tremayne is looking for a challenge, possibly working with nonprofits or in community building.

“There is still an opportunity to have meaningful dialogues in a goal towards peace,” he says. “But we have to get the right folks at the table to hammer these things out.”