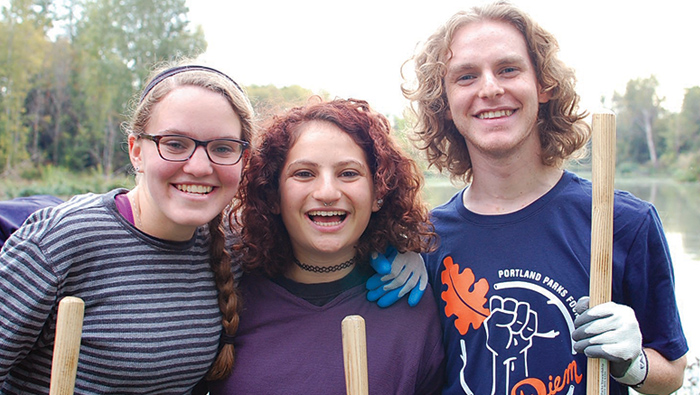 Ten years ago, it was just gaining traction. Then it became a trend. But today taking a gap year between high school and college is the norm. Teens who choose not to go straight to college have dozens of options for what to do with their time. Some travel, some work and some join programs like Portland’s Tivnu, a gap year program that explores connections between Jewish life, social justice and community service.

Although relatively new, with its first year in 2014, Tivnu has become established as a one-of-a-kind program for 17- to 20-year-olds. Participants live together in a house in Northeast Portland, intern at various organizations and volunteer their time to hands-on social justice activism. Jewish programming and outdoor-focused trips are also offered throughout the year.

Nadav Furgang, a Massachusetts native, participated in the program last year and says the experience was life-changing. He spent the year dividing his time among three internships – at Habitat for Humanity, Sisters of the Road cafe and Living Room, a part of Central City Concern.

Nadav says he was originally drawn to the program because he wanted to spend his gap year volunteering. To attend, he deferred from Middlebury College, where he is now a freshman. The Vermont college actually encourages students to defer and take a gap year, Nadav says.

In college now, Nadav says the year in Portland equipped him with life experience he wouldn’t otherwise have. “It’s not a program meant to prepare you for an intense academic setting, but it helps you mature and learn to manage your life,” he says. “Having done a variety of hands-on work during my year in Portland has helped me handle big assignments in school better.”

Nadav says his time on Tivnu gave him tools to begin an independent life as an adult. “There’s a great balance of support and independence on the program,” he says.
At Sisters of the Road cafe, he learned a sense of community, but it wasn’t always easy. “It’s a cross between a food kitchen and a cafe, and most people pay for food with barter, so I was in the kitchen working alongside people who worked to eat,” he says. “But it was great to have a support system within Tivnu, since the placements are tough and challenging.”

He made lifelong friends on the program and credits the communal living for preparing him better for living in the dorms. The housemates cook and eat together two to three times a week, including Shabbat.

“We didn’t just get lucky that we all got along so well. The program did a good job knowing how to help us work and live together,” Nadav explains.

The cohort from last year, made up of eight people, was only the second, giving each student an opportunity to make an impact on the program going forward. “Everyone had a say in how we wanted it to run so it could be the best experience for those involved,” Nadav says.

Steve Eisenbach-Budner started the gap year program two years ago out of a desire to create an experience for young people that would combine Jewish practice with hands-on work.

He wanted to offer young adults a rich Jewish experience thatwas also about social justice and making the world a better place. “Pieces of our Jewishness can contribute to young adults becoming more competent adults,” he says. “In high school, it’s all about academics. Tivnu is much more than that, and different kids get to shine in different ways,” he says.

The program aims to be holistic, starting with head, heart and hands. This often means teaching a whole set of skills that many young Jewish adults don’t have. Almost all of the participants work for Habitat for Humanity as a core part of the programming.

While most graduates of the program will likely work in a professional capacity other than physical labor, Steve sees value in teaching those skills to strengthen a sense of self. “It’s valuable for both men and women to learn a sense of confidence in their bodies. To be able to build a house is a really profound thing,” he says.

Steve says he sees growth and change in the participants during their nine months in Portland, and hears the same from parents. “Soon after I created the program, I found that as much as it’s about Judaism and social justice, it’s also very much about supporting the kids as they grow into adulthood.”

By the end of the program, each participant has given around 1,000 hours to the community. As Steve points out, with eight participants, that’s 8,000 volunteer hours, the equivalent of four full-time jobs. Organizations where the participants volunteer are extremely appreciative.

“We’ve formed strong relationships with many different nonprofits as they’ve grown to appreciate the great work that our participants are contributing. We’re trying to help these organizations build their capacity so they can do more of the great work that they’re already doing,” Steve says.

The program hopes to double in size next year, expanding to a second house and eventually to another city. Steve says grant money from various foundations makes it possible for more than half of Tivnu participants to receive tuition assistance. There are also two scholarship options for members or alumni of BBYO or Jewish community centers.