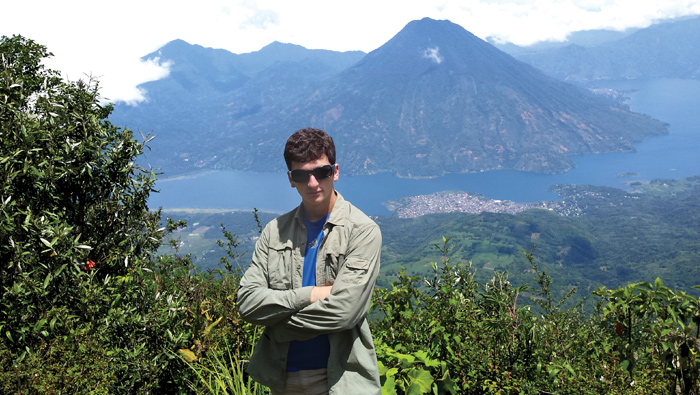 After Ethan Adelman-Sil, a sophomore at Haverford College, spent 20 years as a student, he was ready for a change. He decided a year’s break to see the world was the perfect fit. The avid backpacker began his adventure on the Chilean side of Patagonia last January and spent the next six months exploring. Through hitchhiking and local transport, he made his way through Chile, Argentina, Peru, Cuba, Guatemala and Columbia.

“I grew up backpacking,” Ethan says. “Every summer my parents and I were in the mountains. Patagonia was this mythical place, a whole lot of empty awesomeness.” In addition to being avid hikers and kayakers, Ethan’s parents, Eleanor Adelman and Chaim Sil, have been active in Congregation Kol Shalom for many years. Ethan attended Kol Shalom’s childhood education program, became a bar mitzvah and is still a member.

Patagonia more than met Ethan’s expectations with its large, relatively untouched natural landscape. “The pampas are desert-like, but when you get to the mountains there’s snow, forest and massive glaciers,” he says. “Little towns and ranches are spread out. After I’d been there a while, a town of 5,000 seemed massive.”

Ethan found campgrounds outside town or stayed in hostels. Fellow travelers included numerous Israelis taking a year off after military service. “We call it the Israeli trail,” Ethan says. “They take a route from Patagonia up through Bolivia.” Although he’d forgotten the Spanish he’d learned at school, it came back quickly, and he is now conversationally fluent. It helped him meet local people and see their way of life.

“I left Patagonia at the end of the season,” Ethan says. “Buses were full for three days, and I wasn’t sure how to get out. I woke up early, put my thumb out and a completely full car went by and then u-turned. They said they’d give me a ride if I kept my backpack on my lap.

“In front, the father drove and the mother had twin two-year-olds on her lap. The back seat had a nine-year-old, a 14-year-old and a huge pile of junk. They were going to home, an 18-hour ride. They took me all the way to their house where I slept on the floor. They gave me breakfast and dinner and put lunch in my bag without telling me when I left.”

Ethan stopped in the Southern Peruvian city of Arequipa, where he found great views, market stalls with the world’s best soup, and an eclectic mix of indigenous and business-oriented people.  Continuing his journey, he landed in Cuba without first obtaining a visa. “The Cuban government doesn’t care,” he says.

“Cuba is a place where the average legal salary is about $20 a month,” Ethan says. “You have your house, food, gas and electricity but not much else. It’s a poor country with phenomenal health care, education and a lack of homelessness.”

The places he stayed in Cuba sounded like friendly Airbnbs, private homes with an extra bedroom or two. “It was something between a hostel and a homestay,” he says. Architecture depended on the city. In Trinidad, a beautifully preserved colonial city and UNESCO heritage site, Ethan found a single story house with room for three guests.

“You entered into a kind of living room with rocking chairs and a small TV,” he says. “They had an outside dining room and an inside dining room. It felt more like a complex than a house, because you were constantly going from an inside room to an outside room with a covering. In Cuba, the food varied. They had big plates with meat, salsa, rice and beans, and they had really bad pizza. The fruit was phenomenal.”

Ethan hopes other young people will consider a similar trip. Traveling was fun, life altering and surprisingly doable. “Traveling alone you learn to be around yourself,” he says. “You learn a lot about yourself, especially when you’re on a budget. There are so many communities out there – international traveling communities and expat communities. As I met more and more people, I realized how many ways I had the ability to live. I could be a nomad or settle in Arequipa. The trip opened all these possibilities of what I can do with my life.”