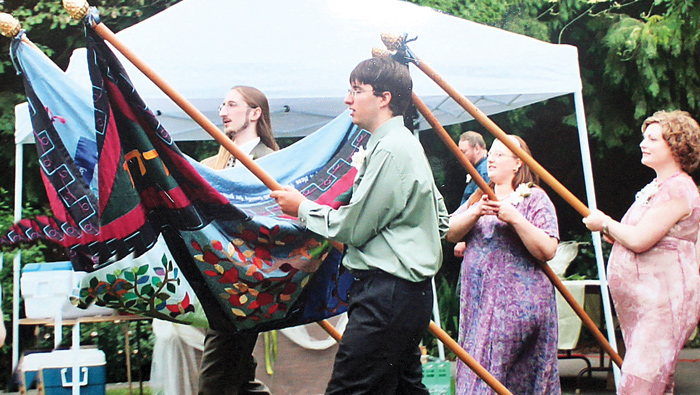 Every time Cantor Barbara Slader helps a couple plan their wedding, it brings back the joy of her own. Those memories of her 1991 wedding include family, flowers and the centerpiece, a chuppah created by Barbara’s friend, artist Jane Levy Campbell.

In fact, handmade chuppahs have become a tradition and ritual for many Portland couples. The square or rectangular wedding canopy, usually made of cloth and supported by four staves, goes back to biblical days and symbolizes the home a new couple will build. Open on all sides, it reflects how Abraham and Sarah opened their tent to welcome everyone.

“This was an opportunity for something filled with love, creativity and personal connection,” Barbara says. “Anytime you add beauty to your Shabbat table, tallit or other ritual object, it amplifies the mitzvah. I made the poles out of closet rods, and Jane made the chuppah from a semi-sheer, heirloom tablecloth. She added swags of ribbons, and I asked the florist to make small bouquets of spring flowers to fasten to the top of each pole.”

Although the heirloom tablecloth went home with her friend Jane, Barbara’s chuppah lived on. “We had a 25-year supply of ribbons,” she says. “I put them on sewing baskets and festooned them around the dining room every time there was a holiday or celebration.” The poles came in handy at weddings where she officiated, although they’re shorter now.

“I was about to marry a couple on the Crystal Dolphin Dinner Cruise, when I realized the ceiling was too low for the poles,” Barbara says. “Guests were coming in 10 minutes. I said, ‘Quick, does anyone have a wood saw?’ Fortunately, the ship’s engineer did, and he took off a few inches.”

Artist Laurie Fender made a chuppah for her daughter Aliza’s wedding 16 years ago. “It was 6 by 6 feet and the centerpiece detached,” she says. “I took the centerpiece off and Aliza framed it.  Then when my daughter Reyna married, I made another centerpiece for the same chuppah.”

Laurie incorporated lace handmade by Aliza’s great-grandmother, Anne Fendel. “It took one year, and when I finished we had a celebration at Neveh Shalom,” Laurie says. “All our friends and relatives came, and we sewed 613 beads onto the chuppah for the 613 mitzvot you are supposed to do in your life.

“When I create something holy, it represents home,” Laurie says. “When I started the chuppah, I called a friend and told her I couldn’t sew this without a blessing to sing. Every day I sewed, I sang the blessing over and over.”

When Rachel Lambert married in 2003, she created what became an heirloom treasure. Filled with Jewish and family symbolism, the embroidered and appliquéd chuppah serves as a bright tapestry in Rachel’s home between family weddings.

“I thought it was a cool idea but couldn’t be done,” Rachel says. “Then, I realized that even though I had no experience making quilts, I had access to incredibly talented friends.”

Rachel was active in the Society for Creative Anachronism and spent several evenings a week making crafts with other women in the group. All joined in the chuppah-making project, beginning with cutting templates from manila folders.

“I had a silk shower, not a wedding shower,” Rachel says. “Everyone brought scraps of silk to make the chuppah. I made orange-currant and chocolate-hazelnut scones, curried chicken salad sandwiches and fresh clotted cream. I gave out gift bags of things they would need for helping with the chuppah, like embroidery scissors and titanium needles.”

Basically Rachel’s chuppah is four squares framed together and turned on their side to form a diamond. The large tree motif in each square represents the fours sibling in her family and the four seasons – winter, spring, summer and fall. Hebrew letters around the sides say ‘You are my beloved and I am yours,’ from the Song of Solomon. “The filigree is based on the pattern I made for our wedding band,” Rachel says. “Square lines represent my husband, Scott Dean Casebeer.  He is reason and stability. Loopy lines are me – more creative.”

Her twin sister, Janet Strong, included a butterfly in the top “summer” square she sewed. The Chinese, Janet says, believe butterflies symbolize a happy marriage. One friend, artist Lois Hale, served as project architect and spent months adding fine embroidered details such as a worm in the apple and a red star in the night sky. Beloved animals appear throughout the design including a favorite dog and friends’ pet cats.

“I started this project with silly sketches, and I thought it was a dream,” Rachel says. “Now I have something that will be cherished by my family for generations.” Since Rachel’s wedding, her three siblings have also married under the chuppah. They frequently have their extended family Shabbat at Rachel’s house, where it hangs on the living room wall.

“I hope other people feel inspired to do the same thing,” says Rachel’s sister, Janet. “It’s about community, family bonding and a high-quality heirloom that will last forever.”