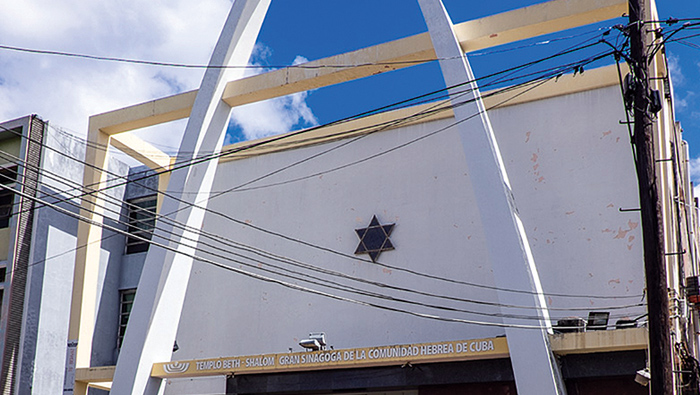 “To be Cuban and to be Jewish is to be twice survivors.”
– Maritza Corrales, “The Chosen Island”

Editor’s Note: The author of this piece, Irene Shaland, will present “The Jewish Experience against the Background of Cuban History,” at the Crypto-Judaic Studies Conference Nov. 5-7 in Philadelphia. The Society for Crypto-Judaic Studies was founded in August 1990 by Rabbi Joshua Stampfer of Portland and Dr. Stanley Hordes of Santa Fe, NM.

My visit to Cuba in March of 2017 led to a remarkable personal discovery that went against everything I had read before the trip. Today, the Jews of Cuba, once called a remnant of the 15,000-strong community, demonstrate rebirth and reinvention. The tiny community of 1,000 on the island of 11 million people is robust, has a strong sense of identity and is very different from the Jewish community before the 1959 revolution.

The contemporary Cuban Jewish narrative depicts a fascinating trajectory. First, a descent from vibrancy and prosperity to near oblivion after the mass exodus of the 1960s and years of imposed atheism. Then, a recent sudden ascent to becoming a “Celebrity of Tropical Diaspora,” arguably the most visited and photographed of the world’s Jewish communities. The Cuban Jewish story reflects not a single community but rather a mosaic of several built by five distinctly different waves of Crypto-Jewish and Jewish immigrants.

Cuba has been a refuge for the Jews since 1492, when Conversos sought a safe haven from the Spanish Inquisition. Supposedly the first European settler in Cuba was a Converso named Luis de Torres, born Yosef ben Levy Ha-Ivri. An explorer and translator, he sailed with Columbus on the Santa Maria. He is often proclaimed the first Jew to set foot in the Americas! The Luis de Torres Synagogue in Freeport, Bahamas, was named after him.

The Inquisition records show details of several trials and executions of Cuban “Judaizers.” The Holy Office in the Spanish colonies was abolished only in the early years of the 19th century.
The Cuban settlers of Jewish descent wanted to blend with the Spaniards and “disappear” into Cuba. And they did.

The most famous Crypto-Jew of Cuba was Fidel Castro himself, who admitted on a few occasions that his ancestors were of Jewish descent.

The 20th-century Jewish story prior to Castro’s revolution

Our first stop in Cuba was Santiago, the city that brings history pilgrims to the very roots of Cuban and Jewish history. Columbus landed in 1492 about 200 kilometers east of what is today Santiago, which became one of the first Spanish settlements on the island. In July 1898, Theodore Roosevelt’s cavalry attacked San Juan Hill and captured the city, ending Spanish domination in Cuba. The American Jews began arriving shortly after. They were the first “real” Jews to settle on the island as part of the much larger and fast-growing American expat community. Attracted by the opportunities of investment and the promise of wealth, they sought to replicate their American environment in Cuba. In 1904, they founded the first synagogue in Havana, a Reform Union Hebrew Congregation, and in 1906 they acquired a plot for a Jewish cemetery. These two events are often considered the official beginning of the English-speaking, Cuban-American Jewish community.

Sephardic Jews arrived next, mostly refugees from Turkey. Speaking Ladino, they did not have the same language or cultural barriers as did the other Jewish immigrant groups. The largest group settled in Havana. In 1914 this group established its own communal organization, Chevet Ahim, to provide Orthodox religious services to all the Sephardim of Cuba.

Escaping the escalation of rabid anti-Semitism and violent pogroms in Russia and Poland, Ashkenazi Jews began to arrive in Cuba in the beginning of the 20th century. The locals called them “Polacos” (Poles), even though many were not from Poland. Ashkenazim saw their time on the island as only a brief stopover before entering the United States. When U.S. immigration laws stiffened in 1924, the Cuban loophole was closed and Cuba became the Ashkenazim’s home.

The economic decline of the late 1920s created a nationalist revival focused on returning to the Cubans their rights over their own country. Cuban nationalists in cooperation with the Nazi German Embassy in Havana fueled hostility toward Jewish immigrants.

The fifth and last wave of Jewish immigrants brought European refugees and survivors prior to, during and after World War II. In spite of the anti-Semitic attitudes and tightening of the immigration laws, more than 10,000 Jewish refugees managed to slip into the country between 1933 and 1944. After the war, less than 15% of them remained in Cuba.

Cuban Jewry remained divided into three large sectors: American, Ashkenazi and Sephardi. Each community was a separate entity in their secure corner of a larger “Jewish island” within the island of Cuba, each comfortable with its own cemeteries and services, needs and desires, attitudes and expectations.

Cuba took them all in, and for the most part, with tolerance and acceptance. But Castro’s revolution of 1959 destroyed their world.

Revolution and the “Triumph”

Castro reinvented the history and the calendar. The year of 1959 became the Year of the Revolution. By the early 1960s, the Jewish community of Cuba had ceased to exist. Castro’s policies were never anti-Semitic; rather it was his socialistic destruction of the middle class, which included many Jews who chose to flee. Of nearly 15,000 Jews fewer than 1,000 stayed. The new constitution stated that any religion was illegal. Most synagogues and Jewish schools were closed or abandoned. Jews had to – once again – assimilate and adapt. They also faced ferocious anti-Israeli attitudes and rhetoric after Castro broke with Israel in 1973.

However, the island’s Jewish story defies rationalization. During our conversation with the vice president of the Beth Shalom Synagogue in Havana, we learned about a luxury the Jews enjoyed. Protected by a 1962 personal letter from Fidel Castro, a tiny kosher butcher shop survived through years of government actions to extinguish any religious observances. Located in the heart of the former Jewish neighborhood on Calle Cuba, the shop never stopped supplying kosher beef to the Jews of Havana.

Our guide told us that beef is a precious rarity and is allotted to schoolchildren only as part of their free lunch. Cows are considered the property of the state. Available meat is pork. Why was Fidel sympathetic to the Jewish dietary law? Was it because of his acknowledged Jewish ancestry?

Miracle of Rebirth – The 21st-Century Story

The Soviet Union had collapsed in the early 1990s sending the Cuban economy into a tailspin. A deep economic crisis was defined by a near-total breakdown of transportation and agriculture.

In 1992 Castro created a miracle: to turn the economy from dependency on the Soviets to dependency on tourism, especially American tourism. The constitution was amended and Cuba became a “secular” as opposed to “atheist” state. A new law permitted even Communist Party members to participate in religious observances.

The first Cuban synagogue we visited was in Santiago. Founded by the Sephardim in 1924, it was closed after the revolution and reopened in 1996 to serve 90 or so members. But in March 2017, the doors were locked again when the last family left for Israel. The Cuban Jews are alive and well – just not in Cuba.

Havana, however, presented an entirely different story. We stayed in a Jewish hotel! The beautiful building served as the office of the Food Industry before falling into disrepair in the 1970s. With a focus on tourism, especially that of U.S. Jewish groups, it was beautifully restored as a hotel named Raquel. Jewish symbols are interwoven seamlessly and tastefully with the exquisite art nouveau elements. Every room is named after a heroine of the Bible, and the restaurant serves gefilte fish and blintzes.

In Vedado, a formally upscale neighborhood, we visited the beautiful Beth Shalom synagogue, which was built in the early 1950s by the rich Jews of Cuba or “patrons” (the second name for the synagogue is Patronato). Beth Shalom was restored to its formal grandeur in the early 1990s by the American Jewish Joint Distribution Committee, “the Joint,” and the Miami Jewish Federation. The complex takes up almost an entire block.

Learning about Jews of today from David Prinstein

The vice president of Patronato, David Prinstein, showed us around the synagogue and shared some of the synagogue’s and his family’s history. His grandfather arrived from Poland; his parents became founding members of the Cuban Communist Party. While in the military, David kept quiet about his Jewish origin. Mixed marriages were common. But even then, Jewish life was kept afloat by surviving family memories and by older people. Three synagogues survived in Havana after the revolution: Adas Israel (Orthodox),  Centro Sephardico and the largest in Havana – Patronato (Conservative).

An assimilated Jew, David returned to his roots in the 1990s, through study and participation in the synagogue’s life, rising to become its leader. For most of about 800 members, Patronato is a second home, a center of their lives. The Jewish community has become a place to go, to study, to pray, to celebrate, to eat and to get medicine. Beth Shalom is supported by the Joint and receives numerous donations including medical supplies from various groups.

David estimates there are 1,200 Jews in Cuba today, with most in Havana. Many have some Jewish ancestry or have become Jews by choice.

There are numerous photographs of Fidel Castro at Beth Shalom. In 1998, Castro communicated to the world his support of the religious revival by attending the Beth Shalom during what he called a “revolutionary holiday” of Hanukkah and lighting a menorah.

We also visited Centro Hebreo Sefaradi, which has a small exhibit dedicated to the Holocaust. This spacious building doubles as a cultural and performing arts center. Centro Hebreo is the only remaining institution preserving the legacy of Cuban Sephardim. Their old synagogue, Chevet Ahim, is in ruins. The third synagogue of Havana is a small Orthodox shul, Adath Israel, which maintains the only mikvah in Cuba and supervises the kosher butcher shop. Both are thriving.

While a growing number of Jewish families make Aliyah to Israel, the size of the community is nearly stable as more and more people stop by the synagogue office to find out what steps they need to take to become Jews by choice or to talk about their Jewish ancestry. Are they attracted by the promise of a nice meal a few times a week in a country of empty stores? By access to medicine when even an aspirin is a rarity, and usage of computers in a city with few internet spots? Perhaps. But mostly what seems to bring people to Beth Shalom is an idea of belonging to something very important, something bigger than separate individuals: a robust community, which is more secular than religious, with a proud sense of identity and strong leaders.

By the first decade of the 21st century, the Jewish community of Cuba has turned into a key attraction in Havana for numerous Jewish tours, a Caribbean celebrity. U.S. synagogues and federations organize Jewish heritage-themed travel to Cuba.

The Jews of Cuba, having survived the Inquisition and Castro’s revolution, are now a powerful community, not in numbers but in spirit, and they are optimistic about its future.

Irene Shaland is an internationally published art and travel writer with a focus on the rich tapestry of the global Jewish experience. Paperback and Kindle editions of her third book, The Dao of Being Jewish and Other Stories, are available at Amazon.